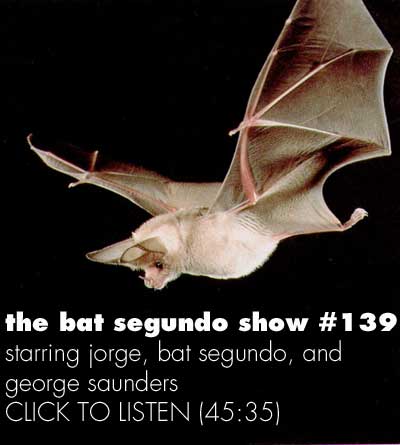 Condition of Mr. Segundo: Feeling a little dead down there.

Subjects Discussed: Writing fragmentary travelogue pieces, trying not to pre-process experiences, observational criteria, Dubai, responding to Ben Ehrenreich’s claim of “pulled punches,” journalistic integrity, on taking people to task, writing comprehensive journalistic accounts vs. one-week accounts, Saunders’s “limited talent,” on “liking to be liked,” the difference between fiction and nonfiction, Minutemen on the US/Mexico border, on taking on a persona, Bob Dylan, the response that came from “‘Borat’: The Memo,” on being called a “tool” and a “young fogey,” cheap edits, mean satire, political labels and satire, generalizations about everything between Los Angeles and New York, not going beyond the first impression, Donald Barthelme, Freitag’s triangle and rising action, why Saunders is savage in fiction, and writing rules vs. writing voice.

Saunders: Each one of the GQ trips was an eight to ten day thing. So really, in a certain way, the form would follow the experience. You know, you go to a place and you’re taking notes like crazy for eight days. And you don’t really know what’s good or what’s interesting and then you come home and start writing them up. And as certain things — you know how it is when you’re writing — sometimes, a certain thing would just lurch forward and it’s writable in some way you didn’t anticipate when you were there. So in a way, it was kind of like taking X number of those things, the ones that would sort of step forward and allow themselves to be polished, and then kind of trust that that was happening for a reason.