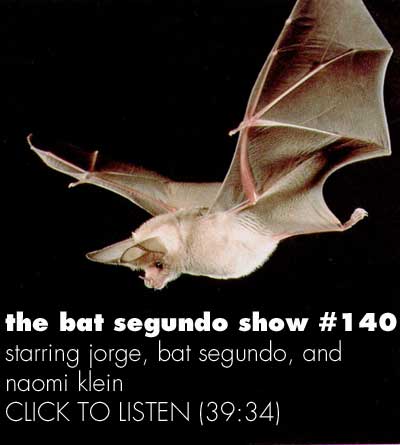 PROGRAM NOTES: (1) Our Young, Roving Correspondent claimed that Milton Friedman supported the New Deal. Naomi Klein claimed that he did not. As it turns out, both Our Young, Roving Correspondent and Klein were wrong. In an October 2000 interview, Friedman professed his support for the parts of the New Deal that involved providing jobs and relief for the unemployed. This was the “very exceptional circumstance” that Our Young, Roving Correspondent referred to. Apologies on our end for failing to clarify. (2) For more information on United States suicide rates, here is a solid overview. If suicide is, as Klein suggests, linked explicitly to an economic downturn, what explains the slow rise in suicide during the Roaring Twenties — a then unprecedented period of prosperity? While it is certainly true that the suicide rate rose during the Great Depression, the point worth considering is that suicide is not completely linked to economics. (3) While Klein did not provide a supportive endnote in her book for the post-Solidarity Polish journalistic label “shock therapy,” here is a helpful reference point for those looking for more information: No less an authority than Jeffrey Sachs, who Klein identifies as one of the chief instigators of the “shock doctrine,” observed how “shock therapy” came to be in a 1994 lecture delivered at the University of Utah. Sachs believed that the journalistic label “shock therapy” played into the Eastern European belief that a drastic alteration of the economic system would produce results. While Klein is right to point out that this was a term in use, it remains our belief that it would have been more helpful to outline the specific points of causation.

Subjects Discussed: Milton Friedman and the University of Chicago school of shock economics, polarization of the superwealthy, consumer boycotts and “market democracy,” the New Deal, Augusto Pinochet, the good things about Friedman, Edwin Black’s IBM and the Holocaust, the damage from economic ideology vs. innate business corruption, writing an “alternative history,” relying too much on the “shock” label, Samantha Power’s A Problem from Hell, post-Solidarity Poland and “shock therapy,” quibbling with Klein’s footnotes, whether suicide rates can be exclusively linked to economic factors, Israel’s defense export economy, Margaret Thatcher’s England, and whether reduced inflation or the Falklands War boosted Thatcher’s approval rating.

Klein: I’m not sort of just projecting Chicago school ideals onto a country. I’m talking about specific places where key graduates of the program…

Correspondent: Well, I’m not disputing that.

Klein: …came to positions of power.

Correspondent: I am not disputing that there…

Klein: I’m just not quite sure where IBM fits in.

Correspondent: Well, what I’m saying is is that it’s not exclusively this Friedmanesque ideology that is causing these particular factors. I mean, what I’m wondering is — is I present the IBM scenario as, well, here’s a case of, in my view anyway, clear unethical business practice and yet it has nothing to do with Friedman economics. Just as, I mean, yeah, there are plenty of examples you give. The various leaders who are listening to lectures on tape and, of course, all the Chicago Boys, and all that stuff. I’ve definitely read the book. I’m just asking, where does Friedman depart from some of the unfortunate shock treatment that you describe to various…?

Klein: Well, I think the key thing to understand is that I am not arguing that this group of people, that they are the first people to employ these tactics to advance their political goals. And I, you know, I piss off people on the left by quoting Mao and Pol Pot and all these, you know, Communist figures of the past who shared a similar desire to use shock and crisis to push through their agenda, dreamed of societies being a blank slate on which they could build their ideals. I also draw…I also talk about fascism and Nazism and you know, I think that, the reason why I’m focusing on this group of people of the past thirty-five years, as opposed to the book just being a history of everybody who’s ever used shock is that I’m trying to present an alternative history of how we got to where we are. I’m trying to present an alternative history of the ideology that is the dominant ideology of our time, so dominant that we don’t see it. It’s the air we breathe. And I think that we have been living with a fairy tale version of history.