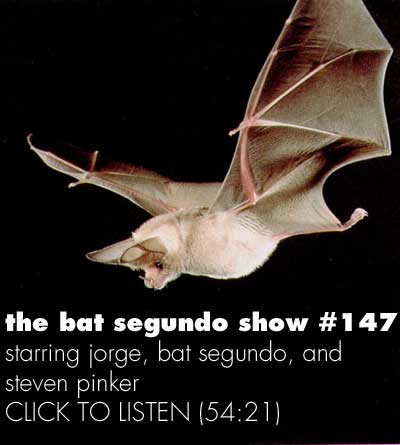 Condition of Mr. Segundo: He knows his first name is not Steven.

Subjects Discussed: The Starbucks coffee cup size hierarchy, L.A. Story, “divorce project” and unusual noun phrase connotations, perceptive illusions in language, connotation and denotation, polysemy, campus slang and being hip, euphemisms, the unpredictable nature of words and terminology, the origins of “spam,” the absence of specific terms, locative elements of verbs, meanings and brute memorization, “giggle” vs. “Google,” profanity, offensive language, the difficulties of the surname “Koch,” groups adopting pejorative terms, Lenny Bruce’s infamous routines, dysphemisms, whether the Internet truly reflects language, Overheard in New York, William Safire’s columns, linguists being forever behind the language curve, the origins of “not” (from Wayne’s World) and “my bad,” Jerry Fodor’s extreme nativism vs. reductionism, cultural colloquies vs. cultural status, George Lakoff and language as metaphor, the inevitability of metaphor within certain occupations, language and politics, the brain as a computer, the Declaration of Independence, syntactical memes just under the radar, spatial elements and morphemes, memorization, rigid designators and Saul Kripke, given names that are already in the human continuum, and causation within language.

Correspondent: You respond to many of Jerry Fodor’s cognitive theories and you compare his approach to a trampoline. And you respond to his extreme nativism by observing that language can be arranged in more reductive units than he actually allows for. But actually, I wanted to ask you how reductive can one get with language? Does it go back to suffixes? Letters? I mean, is there a point where one can get too small? Or what?

Pinker: Well, you can’t just keep going, uncovering layer after layer after layer. And eventually I think you reach some sort of bedrock. We do know that language thrives on combinations. Like the Starbucks coffees again. Where sentences are composed of phrases, are composed of words. Words are composed of vowels and consonants — well, first, of morphemes, which are composed of vowels and consonants. Vowels and consonants are composed of features, like voicing. The difference between /s/ and /z/. Voicing probably relates to features of motor control. That is, whether you raise the root of your tongue, whether you start your vocal chords buzzing. So that would be pretty much as low as you could get while still finding something lawful in language. Now we’ve known that for a long time. The question is: Can you do the same thing with meaning? Are there meaning elements in the same way that there are sound elements. Namely phonological features. In the book, I argue, contra my former colleague Jerry Fodor, who argued that there are no meaning elements. Basically, every word is a meaning element. So the meaning of “kill” is kill. The meaning of “carburetor” is carburetor. The meaning of “trombone” is trombone. But there aren’t constituents or components of a word that are basic elements like features in pronunciation. I argue against him and say that there is evidence for meaning elements like “cause,” “change,” “goal,” “act,” “be,” “place,” and that many verb meanings can be decomposed or analyzed in terms of these more basic atoms of meaning.