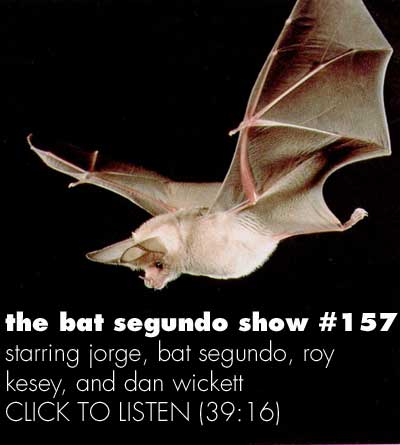 Condition of Mr. Segundo: Wondering if Roy Kesey is a “real” Roy.

Subjects Discussed: Writing stories in Beijing, exotic stories, conversational vs. descriptive stories, Carlo Ginzburg, working from pre-existing conversations, text that kick-starts a character’s voice, personal experience and intuitive narrative choices, the relationship between art forms and words, Jack Kerouac’s scroll, the worst case scenario of the artist’s lifestyle, baroque vs. conversational stories, finding the heart vs. putting together the puzzle pieces, imbuing a baroque character with a human sense, the advantages and disadvantages in “working on only one element at a time,” the difficulties of cooking a seven-course meal, the relationship between problem-solving and being a narrative ventriloquist, limits to the level of invention, Elmore Leonard, Donald Barthelme, cathartic responses to unpleasant airport experiences, dashes in dialogue, on being seduced by Dan Wickett, and starting up a new publishing company.

Kesey: I like playing with diction levels. I like the way that people talk. I like the way they hide things from themselves sometimes when they talk. And all of my stories start with voice. I get a piece of voicing and I try to figure out who it is who would talk like that, and then get them in trouble and try to get them out. And so it all starts with talking. And that doesn’t mean that they’re all going to end up as conversation. But the “Cheese” story was from — the book that the epigraph comes from, a book called The Cheese and the Worms by Carlo Ginzburg, which is a fantastic history book about a 16th century miller in the Fruili, in Italy, who had some pretty strange beliefs and who was pretty outspoken about them and got in some trouble and ended up being burned at the stake. And Ginzburg went into the — he was maybe the first person to go into the archives of the Vatican and get into the history of the Roman inquisition, but looking specifically for places where the inquisitors and the the people that they’re asking questions of are kind of talking past each other. Because these are people — he’s kind of the father of microhistory — and he’s interested in these people that only exist in terms of history now, because they had some kind of problem with an authority figure. Otherwise, they would have totally disappeared from history.