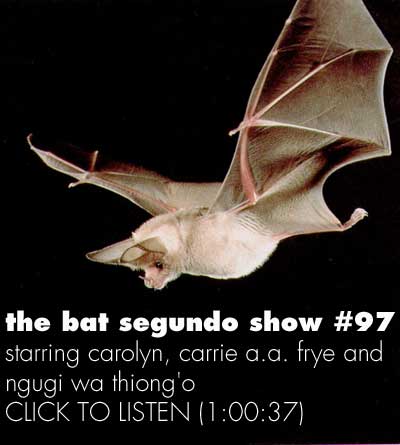 Subjects Discussed: Satirical plausibility, Wordsworth’s willing suspension of disbelief, narrative explanation and interconnectedness, queuing, The Wizard of the Crow as a history of Africa and a global epic, poverty, truth vs. fiction, metamorphosis in nature, comic literary references, Jonathan Swift, how dialogue carries the narrative, theatrical metaphors, Tajirika as charming villain, writing in Kikuyu and translating in English, Kenyan cultural politics in the 1960s, and being imprisoned for writing in an African language.

Thiong’o: Getting a character mentioning, or the narrator mentioning, something in passing, which may look very almost — if a reader is not careful, he may actually miss it. But then as you go on, the small thing mentioned at the beginning becomes larger and larger, and more and more significant. For instance, the issue of queuing. The way it begins is almost offhand and then, as it goes on, it increasingly becomes more and more important, more and more central, connecting the various events.