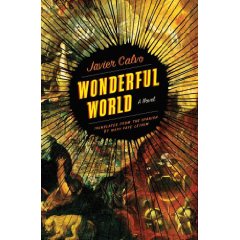 Every once in a while, there’s a novel that’s been inexplicably ignored. Ignored in the way that a band or a movie could have been a hit, had it been released five years before or after, but that has the misfortune of being dumped into an uncomprehending crowd like a kewpie doll in a gated community. A book so giddy and nuts that you find yourself slowing down just to savor the madness. A book that causes you to get so lost in its warped world that you laugh loudly on a crowded subway and you are asked by a martinet-faced septuagenarian to “not enjoy yourself so much.” (Yes, this actually happened to me.)

The book came by accident. But I recognized the translator: Mara Faye Lethem, who also translated Albert Sanchez Pinol’s excellent book, Pandora in the Congo (which I reviewed here). And I thought I’d give it a whirl. Turns out I whirled very right.

The book is Javier Calvo’s Wonderful World. It’s been out for over a month in the States, and only two newspapers have deigned to review it: the Dallas Morning News and The Chicago Sun-Times. Not a peep from the Washington Post, the New York Times, the Los Angeles Times, or any of those ostensible organs intended to serve as our tastemakers. And you’ll certainly hear nothing from the Bookforum snobs or The New York Review of Books. This book is beyond them. And I mean that in the best sense.

Well, I’m here to tell you that this book is the real deal. This is an extremely fun book. The kind of novel I find myself jumping up and down over. The kind of book that one would hope all the litblogs would go crazy about. The same way they went crazy over David Mitchell’s Cloud Atlas, Sam Lipsyte’s Home Land, Scarlett Thomas’s The End of Mr. Y, and numerous others. I mean, I’m enjoying the book that much. This is one of those books for us. How often do you read a book with a Russian thug with dreads who is attempting to cling to his peaceful Rastafarian philosophy as he is about to be tortured by a maniac named Donald Duck? Or a novel constantly obsessed with characters who are “sprawled out” on chairs? Or a mysterious father with a weird fear of windows? Or a completely fabricated Stephen King novel? Or a man wondering why people complain about eating ice cream in the winter as a hooker services him?

If you ask me, the Chicago Sun-Times missed the boat on this. To call this book merely “satirical” or “two-dimensional” is to ignore what a slightly heightened truth can say about the world around us. I should also probably note that Calvo has translated David Foster Wallace. And there are some modest stylistic similarities. But I think the DFW Brigade will be pleasantly surprised by how distinct Calvo is with his odd and wonderfully circumlocutory descriptions (“The way they are consulting the maps and whispering to each other is not so much genuinely conspiratorial. It’s more like the way someone whispers theatrically, giggling and rubbing their hands together, when they want to make abundantly clear to any spectator that they’re conspiring.”)

This is not a book for the stiffs. This is not a book for people who can’t enjoy themselves. And I don’t think I could possibly recommend it to anyone who agrees with James Wood more than 50% of the time. But I can recommend it to anyone who could really use a fun read in this time of shaky economics and swine flu. The kind of punch to the stomach that reminds us that books can, and should, be fun and involving. If only we’d loosen our inhibitions every now and then.