Kurt Andersen has offered the uncut version of his conversation with Harlan Ellison. But what is particularly astonishing is just how much of an ignoramus Andersen comes across as. He constantly interrupts Ellison. At around the 26:30 mark, Andersen cannot get Dreams with Sharp Teeth director Erik Nelson’s name right and must utter the intro again. An embarrassing suggestion that Ellison wrote “Paladin of the Lost Hour” for the original Twilight Zone is there. In short, Studio 360 is a program that is made almost entirely in the editing room and certainly not from the conversation itself. And if this uncut interview serves as a representative rough version of what the editors have to play with, then I wonder just how much Andersen is relying on his editors to salvage the show and make it sound “professional.”

For the record, while there is some editing on The Bat Segundo Show (mostly to boost levels, remove coughs and popped plosives, make people sound a bit sexier, and the like), what you hear on these shows is 98% of the conversation. If I make a referential mistake, I leave it in. If there’s a strange tangent, I leave it in. If a guest and I get kicked out or something strange happens because of a third party, I leave it in. But I compensate for these fallacies by actually knowing the material: reading the book in full, wading through other interviews to ensure that I don’t ask the same questions, making sure I pronounce the author’s name, the book’s title, and the book’s characters correctly (although there have been a few minor slip-ups; nobody’s perfect). I’m determined to get as much of this right in my conversation because it means less editing time for me. And I only have so much time to commit. Perhaps this “one take” sensibility comes from my theatrical background. But apparently Andersen (or his writers) cannot do this.

Just think of all the man-hours that have been expended towards correct Andersen’s mistakes. Consider the labor costs that might have been avoided had Andersen actually bothered to pay attention to his goddam subject.

But what do I know? I’m just some hapless podcaster. 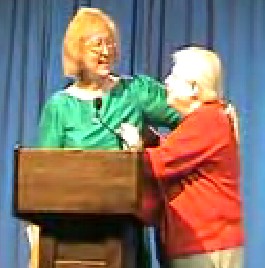 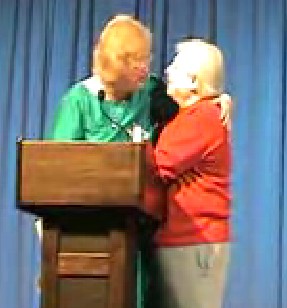 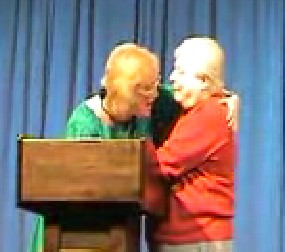 A clear grope at the :44 second mark. No grab? No grope? No fondle? I think not.

At the Harlan Ellison message board, Ellison has posted the following (which he gives permission to disseminate):

Would you believe that, having left the Hugo ceremonies immediately after my part in it, while it was still in progress … and having left the hall entirely … yet having been around later that night for Kieth Kato’s traditional chili party … and having taken off next morning for return home … and not having the internet facility to open “journalfen” (or whatever it is), I was unaware of any problem proceeding from my intendedly-childlike grabbing of Connie Willis’s left breast, as she was exhorting me to behave.

Nonetheless, despite my only becoming aware of this brouhaha right this moment (12 noon LA time, Tuesday the 29th), three days after the digital spasm that seems to be in uproar …YOU ARE ABSOLUTELY RIGHT!!!

iT IS UNCONSCIONABLE FOR A MAN TO GRAB A WOMAN’S BREAST WITHOUT HER EXPLICIT PERMISSION. To do otherwise is to go ‘way over the line in terms of invasion of someone’s personal space. It is crude behavior at best, and actionable behavior at worst. When George W> Bush massaged the back of the neck of that female foreign dignitary, we were all justly appalled. For me to grab Connie’s breast is in excusable, indefensible, gauche, and properly offensive to any observers or those who heard of it later.

I’ve called Connie. Haven’t heard back from her yet. Maybe I never will.

So. What now, folks? It’s not as if I haven’t been a politically incorrect creature in the past. But apparently, Lynne, my 72 years of indefensible, gauche (yet for the most part classy), horrifying, jaw-dropping, sophomoric, sometimes imbecile behavior hasn’t–till now–reached your level of outrage.

I’m glad, at last, to have transcended your expectations. I stand naked and defenseless before your absolutely correct chiding.

With genuine thanks for the post, and celestial affection, I remain, puckishly,

P.S. You have my permission to repost this reply anywhere you choose, on journalfen, at SFWA, on every blog in the universe, and even as graffiti on the Great Wall of China.

There are several things wrong with this.

1. The notion that grabbing Willis’s breast was “childlike” and thus excusable. From all reports (and unfortunately, what we have now is mostly circumstantial), Willis in no way asked Ellison to grab her breast, nor chided him to do so.

2. If what Ellison did was somehow “right” (to his eye) in this context, why not expatiate at length about it? This is particularly uncharacteristic for Ellison, as he’s known to keep obsessive records about damn near everything to prove that he’s right.

3. The utter hypocrisy in Ellison failing to state how exactly he obtained Willis’s explicit permission while on stage (if he did indeed so), while similarly complaining about how other men are not entitled to do so.

4. The wholesale inability to say “I’m sorry” or “I apologize.”

5. The sanctimonious notion that he can get away with this and that this is the product of “a politically incorrect creature” rather than a boorish pig.

Do you think that Ellison had Nixon’s Checkers speech in mind? After all, Nixon likewise found his hand caught in the cookie jar, likewise shifted the terms of the argument away from personal culpability, and likewise couldn’t find it within him to say “I’m sorry” or “I apologize.”

Rick Kleffel has Harlan Ellison’s one-man WorldCon panel on tape. Kleffel assures that it will offend everyone, but it seems rather tame and a bit sad and solipsistic to this listener’s ears. If desperate screaming into the mike is the height of hilarity, then I’m sure you’ll dig it. But the pathetic nature of Mr. Saturday Night comes to mind.

[UPDATE: Gwenda notes that Ellison groped Connie Willis without her permission at the Hugos. More here. A class act, Harlan, if this is true.]

Harlan Ellison will be appearing in Cleveland and the Plain Dealer has the pre-appearance scoop. Apparently, if anyone in the audience uses “like” improperly, they will have to pay 25 cents. Additionally, the Plain Dealer reports that a straight-to-television adaptation of the comic Harlan Ellison’s Dream Corridor (think Ray Bradbury Theatre or Arthur C. Clarke Presents with Ellison stories as the catalyst) is in the works.