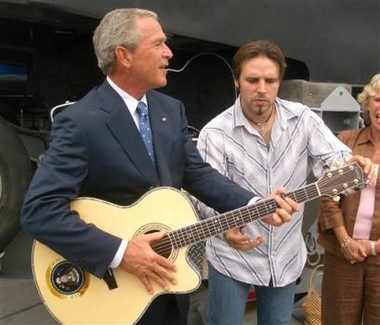 As Gustav’s mad whorl whirls north to the Louisiana coast, the current chatter has less to do with New Orleans’s numb carcass, the rebuilt homes and levee systems that will almost certainly be annihilated, and the wave of destruction that Bourbon Street hipsters will guzzle down with dutiful debauchery. All eyes are now focused upon the political hurricane. Three years ago, the President of the United States played his guitar as New Orleans transmuted into a mute and miserable milieu, as more than a thousand people lost their lives and thousands more were unsecured in their homeland, and as those who fled to the Superdome saw their improvised sanctuary transformed into a madhouse of rape, murder, and suicide.

Lest anyone forget (and if we are urged by the elephants not to forget September 11th, then certainly we should not forget Katrina), this irresponsible bunch demonstrated gross incompetence and negligence on an unprecedented level. FEMA, the American branch of government set up in 1979, showed a dot com startup’s ineptitude after being absorbed into the Department of Homeland Security. One of 2005’s most popular catchphrases did not come from a sitcom or a movie. It came from President Bush telling the incompetent FEMA head Michael Brown that he was doing “a heck of a job.” Brown’s “heck of a job” involved waiting until the last possible minute, putting Katrina victims in trailers with toxic levels of formaldehyde, and preventing bottled water and other supplies from getting to the victims. Most recently, in 2007, FEMA took it upon itself to stage a fake news conference in response to the California wildfires.

Under the Bush administration, FEMA has had more success with this propaganda, placing it above the expected salve of proper relief.

Will the Republicans acknowledge any of this in Minneapolis this week? Or will we see the same lies and moral grandstanding? It could involve another variation on Reagan’s disingenuous pitch to the American people when he ran for President. In the eyes of these bungling opportunists, the question of whether the American public is better off than it was four years ago doesn’t matter nearly as much as the preordained answer. To these wild turkeys, it will be better off under them. Because four years from now, you’re not going to remember what they did before.

To be fair, the incompetence wasn’t just limited to FEMA. The American Red Cross, which had raised more than $2 billion in funds for Katrina, saw its efforts excoriated by international organizations. Funds earmarked for Katrina went to other places. The British Red Cross and the International Committee of the Red Cross had both sent experts to the Gulf Coast, discovering inexperienced amateurs in key roles of responsibility and supplies that were not being shipped to their proper places. The official response of the Red Cross? From Devorah Goldburg:

“It’s frustrating to our thousands of volunteers out there every day, away from their families, helping people. We never said we were perfect — we’re trying to do our best under extraordinary circumstances.”

Instead of Goldburg telling reporters what the Red Cross planned to do in response to these inadequacies, she delivered the same “heck of a job” nonsense that Bush had slapped Brownie on the back for. Helping other people was no longer about being professional. It was about simply being there. Jerzy Kosinski (or the ghostwriters who actually wrote the novel) was decades ahead of his time.

In other words, competence and getting results is no longer part of the American equation. What is important is that those in charge have labored in some sense. Never mind that the quality of that labor was severely lacking, or that those who were incompetent could not be held to any basic level of accountability. Forget the fact that the labor itself resulted in deaths, lives being lost, limitless property damage, and endless consequences for those hit hard by Katrina.

And rest assured, as we receive more horrible images from Gustav’s wrath this week, they will spin you the same lies. They will try once again to tell you that they have done their jobs simply by being there. But they will not dare reveal their inadequacies. And even if they did somehow do this, why should they? It’s not as if you’ll be bothered to remember.

[UPDATE: Thankfully, Gustav did not decimate New Orleans. But while I am immensely relieved that there were no casualties and minimal property damage, I still stand by many of the observations that I made within this post concerning the American attitude towards responsibility, which isn’t nearly as socialist an idea as it seems. This hasn’t stopped one guy from calling me a liberal brown shirt. Which comes with the territory, seeing as how others have called me over the years a Republican, a Christian, a Buddhist, a nihilist, a Quaker, an anarchist, a socialist, a craven capitalist, and numerous other epithets which amuse me to no end. So sorry that, once again, I don’t quite fit into your neat ideological rubber stamp. But of course, my great plan to kick in the teeth of any person I disagree with should go off without a hitch. That little red book I keep hidden up my ass crack has worked wonders over the years.]