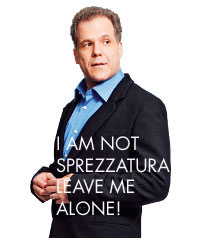 Scripps Howard: “Upon being seen, Trenta said, ‘It’s my dog,’ and, ‘What’s the problem?’ The male dog ran and hid behind the deputies, according to a report released Tuesday.”

1. To what extent is Trenta’s statement true? Is there in fact no problem here? Or does Trenta’s statement represent a cavalier attitude about ethical responsibility? Consider the people throughout history who have uttered two sentences similar to “It’s my dog. What’s the problem?” and discuss their moral capacity at length.

2. Does a pet, by way of being owned, waive his right to consensual relations? What if the situation had been reversed and Trenta had been the one getting pounded by his Argentine Dogo puppy? If the puppy had been capable of speech and uttered, “It’s my human. What’s the problem?” would you react with similar strains of horror?

3. Why did reporter Gabriel Margasak use the phrases “mixed-breed dog” and “a Mexican citizen working as a laborer” in the first four paragraphs? Is there a racist element to this allegedly objective story?

5. Will Trenta be allowed to own a pet again? Or will he be placed on a list of pet offenders kept in the Martin County Sheriff’s Office?