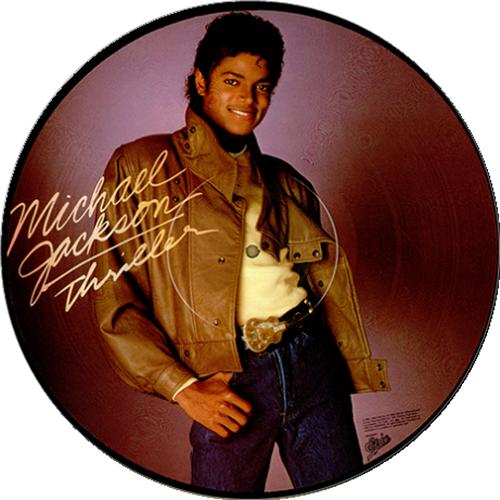 1. We didn’t have a lot of money growing up. But the first (and one of the few) albums that I had was the picture disc of Michael Jackson’s Thriller. Before that, I would nervously call the DJ at my FM radio station and ask him to play Michael Jackson. The disc was played over and over, and I began to deconstruct how the sounds came together. The synth egg shake on “Wanna Be Startin’ Soemthin'” and “Billie Jean.” The way in which the guitars were mixed together in “Beat It.” The fusion of vocals. Michael Jackson helped me find my ears.

2. I really liked Eddie Van Halen but was to shy to say anything about it. Until Eddie Van Halen showed up on “Beat It.” Then it was cool to dig Van Halen. Same went with Vincent Price. And then he showed up on “Thriller.” Michael Jackson helped me find confidence in enjoying the seemingly strange. (On the other hand, in hindsight, I now wonder if I was the victim of marketing. But I suppose strange tastes have to start somewhere.)

3. I had a Michael Jackson “Human Nature” folder in the fourth grade. I carried it close to my chest when I walked and was ruthlessly mocked by my schoolmates for not only having a passe interest in Michael Jackson (the folder was purchased from the discount bin), but for holding it “like a girl.” I then started carrying the folder in the “manly” way, holding it from the side, placing it perpendicular to my arm with my fingers curling over the edge. I was never hassled again for it, until the same schoolmates tore it from my hand and ripped it into shreds just after they beat the shit out of me. Michael Jackson, in his own oblique way, gave me a very good reason not to be a conformist.

4. Weird Al Yankovic parodied “Beat It” and several friends and I discussed the close similarities between Michael Jackson’s video and Yankovic’s video. Michael Jackson, by giving the okay to Weird Al, helped me appreciate satire.

5. Michael Jackson always appeared in gritty videos, often with a fantastical element attached. No matter how impoverished one was, street tiles could light up if you were simply who you were. Michael Jackson gave me optimism during a dark childhood.

6. Michael Jackson died yesterday. As a kid, I had turned my back on Michael Jackson sometime after Bad and rather ungratefully pretended that he hadn’t done anything for me. This wasn’t the case at all. Michael Jackson, in dying, has reminded me of my core values: to value what I have, to remember what others have been kind enough to give me, and to always pay it forward. For the good that you put out there, whether directly or indirectly, means more to people than you know.

While TMZ and Gawker are reporting that Michael Jackson is dead, I wish to point out that there has been no official confirmation of his death. I spoke with Craig Harvey of the Los Angeles County Coroner’s Office and he informed me that there was no official confirmation of his death as of 3:00 PM Pacific Time. The person who is legally obligated to confirm the death is Jackson’s physician. And as of yet, there has been no official announcement.

UPDATE: As of 3:15 PM Pacific Time, the Los Angeles Times reports that Michael Jackson is dead after arriving at a hospital in a deep coma.

UPDATE 2: Michael Jackson’s death confirmed by AP (as picked up by The New York Times). (Thanks for the minor correction, vidiot.)