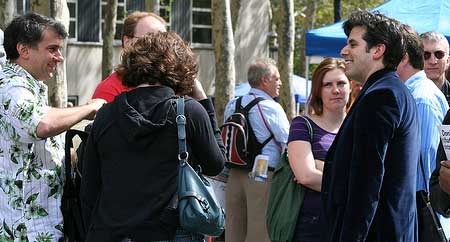 Jonathan Lethem: “Novelists may glance at the stuff of the world too, but we sometimes get called to task for it. For those whose ganglia were formed pre-TV, the mimetic deployment of pop-culture icons seems at best an annoying tic and at worst a dangerous vapidity that compromises fiction’s seriousness by dating it out of the Platonic Always, where it ought to reside. In a graduate workshop I briefly passed through, a certain gray eminence tried to convince us that a literary story should always eschew ‘any feature which serves to date it’ because ‘serious fiction must be Timeless.’ When we protested that, in his own well-known work, characters moved about electrically lit rooms, drove cars, and spoke not Anglo-Saxon but postwar English—and further, that fiction he’d himself ratified as great, such as Dickens, was liberally strewn with innately topical, commercial, and timebound references—he impatiently amended his proscription to those explicit references that would date a story in the ‘frivolous Now.’ When pressed, he said of course he meant the ‘trendy mass-popular-media’ reference. Here, transgenerational discourse broke down.”

The audio geek in me has always wondered how an audio book gets produced. Well, over at Galleycat, Sarah gives us an idea of what goes into an audio book and, even better, it’s the audio book for Jonathan Lethem’s upcoming You Don’t Love Me Yet. The post features an exclusive MP3 of Lethem at the recording sessions.

Jonathan Lethem (one of the good Literary Jonathans) sends word that he’s hosting an 826NYC fundraiser. The movie is Scarecrow, which I contend is a pretty good flick with Hackman and Pacino. The action goes down at The IFC Center on November 9 in 7:30 PM. If you’re in New York and you want to see Lethem geek out with director Jerry Schatzberg, you may want to check this out.

Bob “He Puts the Cream In Your Coffee But Asks You First In Case You Take It Black” Birnbaum talks with recent MacArthur fellow Jonathan Lethem. There’s also a sweet photo of Lethem with a certain canine friend.

In response to this:

Avoid the hoopla and the hate and be you. It’s almost Memorial Day Weekend and people all over the nation are freaking out. Probably some unspoken reaction to the fact that a madman is in office, the United States has been caught with its hands in the photographic cookie jar, and there appears no immediate remedy. Tough times, when you factor in the economy and the fact that more guns will be fired into other people tomorrow than any other day of the year. (Okay, that last statistic was a lie.)

But my point is this: everyone is entitled to freak out a little, including you. If that means stopping the blog for a little while, we’ll miss you, but so be it. It’s a fait accompli. We’re cool.

In response to (1), please stop the negativity. Your stuff is not drivel. Don’t listen to the angry folks. They’re jealous and have too much time on their hands.

In response to (2), did you know that Jonathan Lethem essentially strung together a bunch of stories for his early novel Amnesia Moon? Sounds cool what you’re doing. Part of a grand tradition. You’ve got to start somewhere. Plus, you’ve got to set goals. Glad you’re taking the bull by the horns.

In response to (3), good good and good. Do what you need to do. When it’s ready, it’s ready. Only three people have read my play so far. But you’ll eventually get to the point where it’s no longer love-hate, and it simply just is. Keep at it.

In response to (4), bloggers are fucking crazy. No one is asking anyone to offer in-depth interviews. Since we feel partially responsible, given our previous call for greater coverage, we should also point out Samuel Johnson’s grand maxim, “No one but a blockhead ever wrote, except for money.” We should also point out that we are blockheads. Fuck, we’d love to offer that kind of in-depth coverage, but we’re trying to pay the rent ourselves. And it sounds to me like you’re an expert in yourself. Probably more.

In response to (5), We’ve told you this several times privately, and now we’re going to tell you publicly: You don’t have to answer every email, especially ours. Human beings have limits!

And the Whitbread goes to Mark Haddon’s The Very, Very Curious Incident of the Dog Who Was Let Out by the Baja Men in the Morning, Afternoon and Night Shortly After He Was Fed His Meal, which I’ve been meaning to read. Except I can never remember the exact title.

I didn’t realize the Alexander McCall Smith/Irvine Welsh thing had legs, but even in Scotland, they need their “bag of bones”/”entertainment not literature” Vidal/Mailer in-fights.

Andy Hamilton won’t write for BBC1. Hamilton claims that Auntie Beeb has pressured a writer to remove lesbian characters from a script to “incorporate the conservative tastes of focus groups.”

Modern Humorist: “Where are all the R’s? Is it a typographical error? Does the writer simply not like R’s? Or are there mysterious deeds at play, and are the R’s somewhow involved?”

Birnbaum talks with Jonathan Lethem. Birnbaum even gets Lethem to fess that Laura Miller is “making a contribution to literary journalism.” Birnbaum also shoots the goofy gale with Neal Pollack. Among the revelations: “[Eggers] said he didn’t want me along because my stuff was much more confrontational and in your face and aggressive and loud and profane. He wanted to take McSweeney’s in a more respectable direction. And then one day I woke up and my link was off the site. And I wasn’t a McSweeney’s guy anymore. Overnight. My main conduit for communicating over the Internet had been removed, so I had to start my own site.”

And The Chronicle has apparently reached a settlement with Henry Norr.

[1/23/06 UPDATE: It is quite likely that the Henry Norr story will be slipped under the rug. But I think it stands as a remarkable testament as to how a journalist’s outside activities are controlled to a great extent by his employer. As the newspapers continue to cut the coverage and eventually begin to drop, I am wondering if they’ll become even more controlling. Henry Norr, happily, is still writing — largely for online outlets. He can be found contributing reports for Macintouch and is still actively filing no-bullshit Macworld reports from the front lines.]