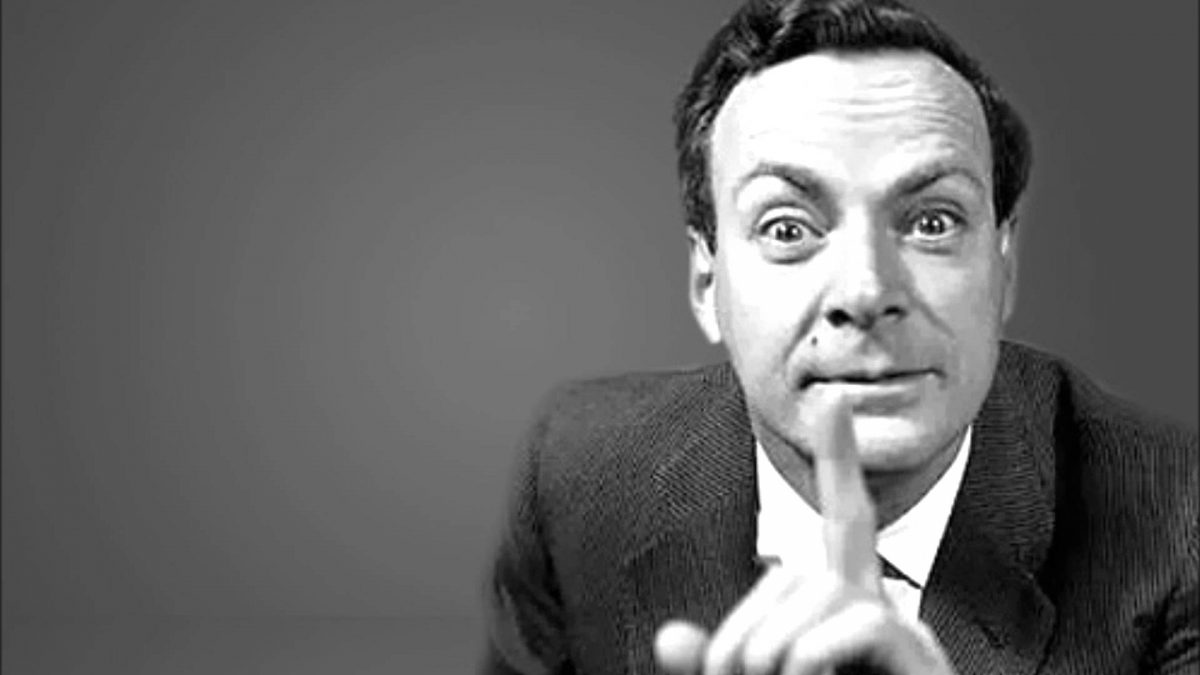 Was Richard Feynman the “brilliant teacher” that his champions made him out to be? I was somewhat underwhelmed by this curated selection of lectures, but I did still come away from Feynman wanting to know more about how science has altered human existence.

Richard Feynman, exuberant Nobel laureate and formidable quantum mechanics man, may have been energetic in his lectures and innovatively performative in the classroom, but I’m not sure he was quite the great teacher that many have pegged him to be. James Gleick’s biography Genius informs us that students dropped out of his high-octane, info-rich undergraduate physics classes at a remarkable rate, replaced by Caltech faculty members and grad students who took to the Queens-born superstar much like baryons make up the visible matter of the universe. The extent to which Feynman was aware of this cosmic shift has been disputed by his chroniclers, but it is important to be aware of this shortcoming, especially if you’re bold enough to dive into the famed three volume Feynman Lectures on Physics, which are all thankfully available online. Six Easy Pieces represents an abridged version of Feynman’s full pedagogical oeuvre. And even though the many YouTube videos of Feynman reveal an undeniably magnetic and indefatigably passionate man of science who must have been an incredible dynamo to experience in person, one wonders whether barraging a hot room of young nervous twentysomethings with hastily delivered information is the right way to popularize science, much less inspire a formidable army of physicists.

Watch even a few minutes of Feynman firing on all his robust cylinders and it becomes glaringly apparent how difficult it is to contend with Feynman’s teaching legacy in book form. One wonders why the Modern Library nonfiction judges, who were keen to unknowingly bombard this devoted reader with such massive multivolume works as The Golden Bough, Dumas Malone’s Jefferson and His Time, and Principia Mathematica, didn’t give this spot to the full three volume Lectures. Did they view Feynman’s complete lesson plan as failed?

Judging from the sextet that I sampled in this deceptively slim volume, I would say that, while Feynman was undeniably brilliant, he was, like many geniuses, someone who often got lost within his own metaphors. While his analogy of two corks floating in a pool of water, with one cork jiggling in place to create motion in the pool that causes indirect motion for the other cork, is a tremendously useful method of conveying the “unseen” waves of the electromagnetic field (one that galvanized me to do the same in a saucepan after I had finished two bottles of wine over a week and a half), he is not nearly on-the-nose with his other analogies. The weakest lesson in the book, “Conservation on Energy,” trots out what seems to be a reliably populist metaphor with a child named “Dennis the Menace” playing with 28 blocks, somehow always ending up with 28 of these at the end of the day. Because Feynman wants to illustrate conservational constants, he shoehorns another element to the narrative whereby Dennis’s mother is, for no apparent reason, not allowed to open up the toy box revealing the number of blocks and thus must calculate how many blocks reside within. The mother has conveniently weighed the box at some unspecified time in advance back when it contained all 28 blocks.

This is bad teaching, in large part because it is bad storytelling that makes no sense. I became less interested in conservation of energy, with Feynman’s convoluted parallel clearly becoming more trouble than it was worth, and more interested in knowing why the mother was so fixated on remembering the number of blocks. Was she truly so starved for activity in her life that she spent all day at work avoiding all the juicy water cooler gossip about co-workers, much less kvetching about the boss, so that she might scheme a plan to at long last show her son that she would always know the weight of a single block? When Dennis showed resistance to opening the toy box, why didn’t the mother stand her ground and tell him to buzz off and stream an episode of Project Mc²?

Yet for all these defects in method, there is an indisputable poetic beauty in the way in which Feynman reminds us that we live in a vast world composed of limitless particles, a world in which we still aren’t aware of all the rules and in which even the particles contained within solids remain “fixed” in motion. Our universe is always moving, even when we can’t see it or completely comprehend it. Feynman is quick to observe throughout his lessons that “The test of all knowledge is experiment,” which again points to my theory that Feynman’s teachings, often accentuated by experiment, were probably better experienced than read. Nevertheless, even in book form, it is truly awe-inspiring to understand that we can still not accurately predict the precise mass, form, and force of all the cascading droplets from a mighty river once it hits the precipice of a waterfall. Such mysteries capture our imagination and, when Feynman is committed to encouraging our inventiveness through open and clear-eyed examples from our world, he is very much on point. Thanks in part to Feynman reminding me just how little we silly humans now know, I began to feel my heart open more for Tycho Brahe, that poor Dane who spent many years of his life refining Copernicus’s details and determining the elliptical patterns of planetary orbits. Brahe worked out his calculations entirely without a telescope, which allowed Johannes Kepler to sift through his invaluable measurements and forge laws that all contemporary astronomers now rely on to determine where a planet might be in the sky on any given night of the year. Heisenberg’s uncertainty principle hasn’t even been around a century and it’s nothing less than astounding to consider how our great grandparents had a completely different understanding of atoms and motion in their early lifetime than we do today.

Feynman did have me wanting to know more about the origins of many scientific discoveries, causing me to contemplate how each and every dawning realization altered human existence (an inevitable buildup for Thomas Kuhn and paradigms, which I will take up in ML Nonfiction #69). But unlike such contemporary scientists as Neil deGrasse Tyson, Alan Guth, or Brian Greene, Feynman did not especially inspire me to plunge broadly into my own experiments or make any further attempts to grapple with physics-based complexities. This may very well be more my failing than Feynman’s, but there shall be many more stabs at science as we carry on with this massive reading endeavor!

Next Up: G.H. Hardy’s A Mathematician’s Apology!