(Note: When you read the headline above, pronounce MPLS as ‘Mipples.’) 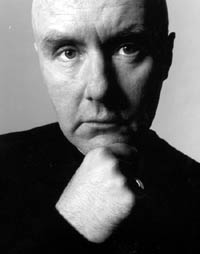 transgressives for such books as TRAINSPOTTING, FILTH, and A SMART CUNT [una novella].

Said reading occurred at 7:30pm in Minneapolis’ Magers & Quinn bookstore, located on Hennepin Ave., the hipster/yuppie locus of uptown. Expecting Chuck Palahniuk-level attendance, I arrived a half hour early with six books, and one DVD, in hand. “You’re not going to be a dick and make him sign all of those are you?” said my friend Ryan. I was, and I did. I am a dick.

Upon arriving, I was surprised to see only one other guy—a bald, cowboy hat-wearing 20 something—in attendance. By the time Mr. Welsh was up to read, however, those numbers had ballooned, with the standing room kinda cramped and every seat filled. Well, every seat except for the two rows immediately in front of Mr. Welsh, to which he said, “There’s two rows up here, so come up and fill them in. It isnae a problem.” Why don’t people ever sit in the front rows at readings? Too shy, I assume.

Before Welsh read, two lingerie-clad burlesque dancers moved through the crowd handing out eclairs. Their presence alluded to Welsh’s new book, BEDROOM SECRETS OF THE MASTER CHEFS, whose front cover features a photo of an eclair entering a full-lipped female mouth, phallus-like, visibly cream-filled. Ryan and I ogled the burlesquers until one reached us, when, with her cleavage in my face, I grabbed an eclair from my big-breasted server’s tray.

Looking quite the ruffian, Welsh stood relaxedly before his admirers, pushing away his podium and settling for mic only. He was, with his iconic bald head, his tattoos and his Scottish accent, completely charming. “I’m so glad we have Groundskeeper Willie now,” he said. “And Shrek, because Americans understand me.” As Welsh read he assumed a stance akin to Johnny Depp’s Jack Sparrow’s in PIRATES OF THE CARIBBEAN, with a rock star sway detectable during his performance of three selections from BEDROOM SECRETS. END_OF_DOCUMENT_TOKEN_TO_BE_REPLACED

That Darcy bloke won’t give me a fag. Crusty polite little bugger. Hangs out with Bingley sometimes, but the man needs a drink. Several, in fact. I’d like to see Darcy loosen up a bit, maybe light under the foil and inhale Great God’s fine smoke.

The odd thing is that Darcy’s so polite. He should be some cunt hosting a late night teevee show or cringing at the thought of using a public restroom. I’d like to see that uptight bugger fetch for his suppository.

What kills me is that one of Bingley’s sisters actually fancies him. Wouldn’t stop going on about his penmanship. The prim cunt ignored her.

– You fuckin shite, I said, – how many fuckin birds care enough to fuckin pay attention to your fuckin handwriting? For fuck sake, she gets enough fuckin hell from Elizabeth. Are you fuckin listening?

Darcy said nothing, though he took a liking to Elizabeth. The poor fuck was badly in need of a shagging and could only do so through legitimate marriage.

See, that’s the kind of sad case Darcy was. I’d hoped he’d piss off and find a proper place in the suburbs where he wouldn’t plug a finger up our miserable Scottish arseholes.