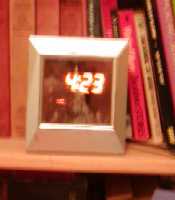 The 1906 earthquake centennial was a boorish affair — an exercise in gaudy gaucherie where the media was placed first and the people figured in last. Perhaps my feelings are tainted a bit by my recent run-in with San Francisco’s finest. But the facts don’t lie.

Several large LCDs were placed just outside the main congregation point, as if to suggest to the people that they may as well stay home and watch the event on television. Within the actual corner of Kearny and Geary Streets, where Lotta’s Fountain resides, if you were one of the lucky two hundred who somehow made it past the elevated island designed to convey passengers onto the F Market train, then you had a view as clear as Gavin Newsom’s complexion.

Of course, given that about 7,000 people (possibly more) showed, one couldn’t help but contemplate plutocratic metaphors.

I arrived later than expected, in large part because I walked about thirty blocks when there was no sign of the promised buses that MUNI had planned to provide around 4 AM. Fortunately, providence was on my side. And when I hit Market and Van Ness, I managed to board a bus, arriving within minutes of the 5:12 AM moment of silence. An audio report of these adventures will soon follow. 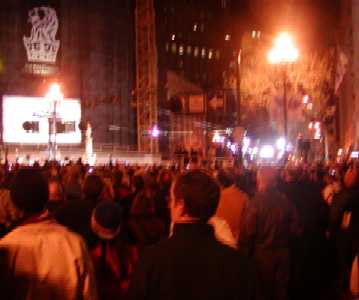 I worked my way behind the elevated island, which was occupied by all manner of media people. If this was truly an event for the people, the media pool might have been placed somewhere else. I had a better view of a personal assistant spraying goop into a reporter’s hyperconditioned hair than any portion of the stage.

Indeed it seemed that we were there more for B-roll. An expensive-looking camera on a computer-operated jib rose up and down capturing the hurried crowd.

It wasn’t a good place to be if you were claustrophobic.

There were bright floodlights designed to limn attractive and well coiffed reporters. I hadn’t had a single cup of coffee yet and this did not augur well for visibility, much less coherence on my part. 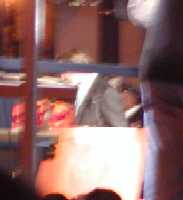 I caught a sliver of Gavin, dressed in a gray suit and spouting off all manner of treacle. He resembled a dubious faith healer more than an elder statesmen.

It was Our Mayor who came up with the rather cruel idea that all bells and sirens in the City should go off at 5:14 AM, meaning that those who didn’t want to take part in this celebration were doomed to remember the day anyway.

And this was the thing that troubled me. A hundred years ago, more than 3,000 people died. 225,000 were left homeless. $400 million in property was lost. (All of these numbers by the way come straight from my noggin, without Googling. I have a slight obsession with disasters and apocalypses.)

And there were more deaths, many of these shootings unnecessary, from the fascistic emergency order issued by the police designed to enforce a tight curfew. 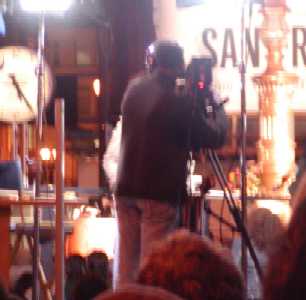 In other words, here we were at an event that was more designed as an ostentatious expose for San Francisco media. Before any of the survivors came forward to speak, the podium was given to the fire chief and the police chief. When a charming old gentleman did in fact get his time, it was more Gavin’s moment than his. I felt like I was watching some surreal talk show as Gavin asked him awkward question about what he does today (apparently, working two days a week). This was hardly a memorial for the people whose lives were lost, whose very existences were displaced, and who later fell victim to the excessive martial zeal of then-Mayor Schmit, General Funston and the military. 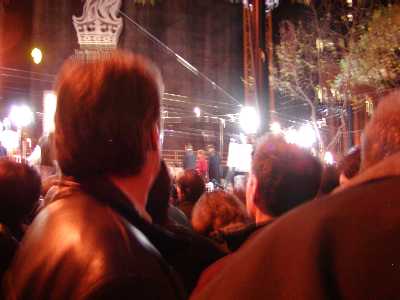 The great irony is that, being so jam-packed in the crowd, locked into place by a crowd control situation that was rather anarchic, if an earthquake were to occur at that moment and the buildings and traffic lights were to come crashing down, I’m almost positive we would have been killed.

I did my best to record audio of the proceedings and to take pictures. But I was repeatedly pushed and shoved. And when I was elbowed in the face by a capacious and bulbous gentleman who clearly didn’t understand the Cavalieri principle, I decided to go home.

This was not a ceremony for the people. This was not a ceremony for the historians or for anyone who loves San Francisco as much as I do. In fact, it really wasn’t much fun at all. It was an event which felt, from start to finish, entirely manufactured. Which was another great irony, considering that it was the spontaneous actions of people that got my city rebuilt and, most recently, got this nation through 9/11 and Katrina. 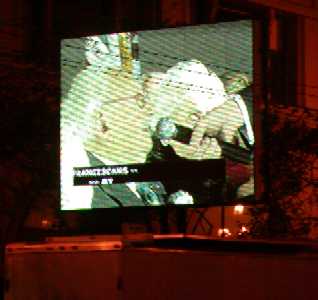 But I cheered up immensely when I hit Powell Street Station and headed home. For a gentleman with a guitar was singing the Kinks’ “Sunny Afternoon” with great ardor. Considerably off-key, but he sung with more passion than Heather Fong or Gavin Newsom could muster in their speeches.

I smiled and gave him a dollar and knew that this guy, playing to no audience, was the San Francisco I loved and knew. 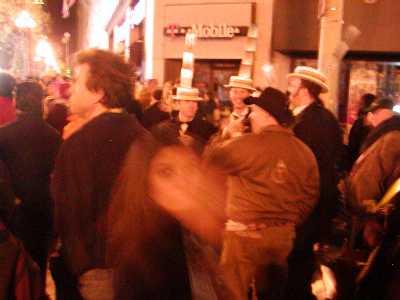 Not as many people dressed up as I thought. 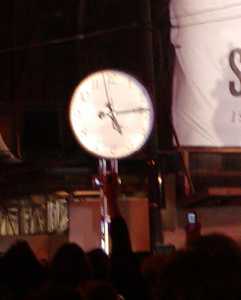 How much did this clock cost the City?