A few prefatory words about this excerpt: Will Self is a tall, thin, vaguely cadaverous-looking man, with a triangular head and enormous eyes that blink sparingly. He is also quiet, curious, and considerably punctilious. His command of the English language is as present in his speech as it is in his fiction. I talked with Self right after he had checked into his hotel — this after a walk from LaGuardia Airport. He carried no luggage. When I asked him where he stored his change of clothes, he then proceeded to reveal several carefully folded squares of clothing that he had kept upon his person. Self challenged me on my assumptions about the dérive, the psychogeographical term for a “drift.” When I suggested that such a linear walking narrative might reveal recurrent patches of drab land, he suggested that I had a perceptive anxiety. I said that I simply didn’t have the time, but he may have been right. The day after the interview, I found myself immersed on a long walk around the perimeter of Prospect Park where I drifted into surrounding blocks and contemplated the insanity of a twenty-five mile walk. Perhaps this was just the beginning. 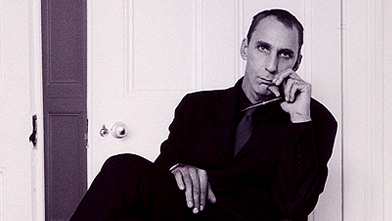 Correspondent: I wanted to actually ask you about your observation in “Madame Jacquard,” about giving up cigarettes, and how cigarettes form this necessary unit to get from one place to another and how it’s part of this linear narrative “translated into a series of perplexing jump-cuts.” You’re down to three [a day] now. So I’m wondering if, speaking now, you have any kind of linear narrative now with these three or…?

Self: Three is not enough for a narrative. Then, it would be concision. It would be like haikus.

Self: And that’s just not enough cigarettes to provide a narrative anymore. You need the constant ebb and flow of nicotine in your system to provide that. It’s not working for me anymore. I’ve lost the cigarette narrative.

Correspondent: Yeah. Well, you have, basically, the walking narrative, I suppose.

Self: Yeah, maybe the walking narrative is there more strongly as a result. I’ve had some absolutely splendid walks during this trip. It’s been very exciting for me. The airport walks have been great. But perhaps the best walk was — I walked in from Pearson to Toronto. I walked in from Sea-Tac to Seattle. Big walks. Sixteen, seventeen mile walks. I had a good long walk in San Francisco out from Castro to Sausalito over the Golden Gate Bridge. I had a beautiful walk where I arrived at O’Hare and then kind of got off the subway the first stop — I think it’s called Rosemont. Within twenty minutes of leaving the aircraft, I was face-to-face with a deer in a wood by a river in this totally underimagined place. It’s a classic interzone — classic liminal place — and then found myself walking through the wood directly under the flagpole.

So I had this kind of juxtaposition — what I think of as the modern sublime. Jet travel is the strangest, fascinating, most awe-inspiring physical experience that most of us will have in our lifetime. It’s mediated by human society in that way. And yet everything about international air travel is arranged to make it dull and vacuous and boring. And yet the airport walk recovers the sublime aspect of air travel in that way. And then yesterday in Chicago, I walked to Wal-Mart, which was another kind of walk. Another sort of biopsy of the urban environment.

I mean, I think, in the way I do differ from [Guy] Debord is that, of course, I don’t believe in the act of the dérive. I don’t know what the L.A. Times critic thinks about it, but on the Debordian premise, a dérive should destroy the society and the spectacle.

Self: When Debord was writing, the Marxists still spoke quite fervidly about late capitalism. But how late it is. (laughs) And it’s later and stronger than ever!

Self: So I don’t have that kind of — and indeed I think that the kind of Marxian conception of what these sort of ants might be involved in is ridiculous and moonshine. But I do think there’s a different kind of insurgency involved in long-distance walking in this way.