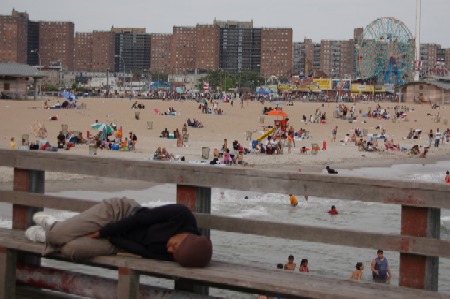 Situated at the southernmost tip of Brooklyn, Coney Island is thankfully far from extinct. This came as something of a pleasant shock to me — a native Californian trying to divest himself of a regrettable Left Coast provincialism. I had expected the place to be washed up: a pale shadow awaiting some sad day of interring. I had expected the place to be grimy, largely unpopulated, oozing with shady Dickensian characters — equivalent to San Francisco’s Playland circa 1971, when the park’s best years were behind it. I had retained some foolish and unsubstantiated belief that the era of the old amusement parks, with its delightful and rickety wooden rides, its lack of movie tie-ins, and its concern not for chintzy merchandise but for hot dogs and barkers giving you a hard time, was gone or, at best, relegated to the fairgrounds circuit.

These attitudes may have originated from being just old enough to witness the tail end of the mid-20th century amusement park’s heyday — at least in California. As a boy, I was able to see Frontier Village, Great America (before it was corrupted by Paramount), and the Santa Cruz Beach Boardwalk (thankfully still standing).

Coney Island is, as far as I know, one of the last of these amusement parks still operating along these lines — built and operated on analog technology. I’m convinced that its greatness has much to do with this quality. I have long been fascinated by gears, pulleys, trains, elevators, analog phones, swivel chairs, and subways — in short, anything that involves wheels and basic mechanics that remains just as efficient, if not more so, than some artless electronic replacement which serves only to uproot its reliable originator.

It is this very uncluttered quality which I believe keeps both Coney Island’s employees and its participants honest — which is particularly amazing for the former, given that they are working in the baking sun for twelve hours a day. Coney Island defers its environment to the perception and delight of its locals, rather than subjecting its attendees with artificial hues that try too hard to delight or evoke the sham of a family-friendly feel. In this, it resembles, as much as an amusement park can, the real world, involving conflicts and clashes, rather than some egregious fantasy construct where everybody’s a winner. It understands, just as the pleasant mecca of Brooklyn understands, that pampering or catering to the whims of regulars comes at the expense of self-sufficiency or a certain appreciation of the heterogeneous.

Where the amusement park designed in the late 20th century asks you to commit a colossal sum of cash for the privilege of entering the gates (to say nothing of parking), features human-sized mascots (often culled from animated films), has beefy men manhandling your bags (often confiscating your bottled water), tarnishes the back of your hand with a crude and smudgy ink stamp (often only perceptible in black light), and otherwise creates an antiseptic environment forcing one to be amused on the park’s terms, rather than the reverse, Coney Island offers no such restrictions and I suspect the people who frequent it are considerably more relaxed because of it. You can walk into Coney Island and look around or, if you’re so inclined, throw your lot with one of its many attractions.

Here, you can get a hot dog or an ice cream cone for a mere two or three bucks. When purchasing a mango ice cream cone (the fruit choice, because I had simply had far too much chocolate for my own good that week), I was given considerable shit by a barker, who saw my order as an affront to masculinity. I was left smiling, wondering if such a playful jab, transposed to Disney World, would spawn a civil lawsuit from an overly fastidious family man.

Coney Island, then, is the cultural obverse and, I would argue, the superior to Disney — not just because of this authenticity, but because it has a greater awareness and respect for its own history. Where Disneyland’s last great ride, Pirates of the Caribbean, was recently “upgraded” to include references to the recent box office blockbusters, sullying what was already a quite fine ride thank you very much, Coney Island carries no such need for reimagining or reinventing itself to suit such fickle commercial needs. Perhaps because Coney Island has been around a few decades longer than the Mouse, it’s had greater time to understand that there are certain advantages in vintage conservatism. Then again, it’s probably more predicated upon Coney Island’s polyglot makeup of private operators, who are all more attuned to long-term investment (observe the paucity of attractions constructed in the past twenty years).

There are certain amusement park standbys (the haunted house named “Dante’s Inferno,” the Tilt-A-Whirl, etc.). There are even unapologetic ripoffs, such as a spinning teacup ride perhaps offered in response to Anaheim’s shameless pilfering of waterfront amusement parks, sans water. But like a fairground or a tab at a bar, the cost accrues with the frequency of riding. I was particularly amused by the discounted offer to ride many of these rides again for a mere pittance — even the rough-and-tumble Cyclone, which I shall get to later. Once you’re in the rider’s seat, you’re potentially there for life, or as long as your billfold holds out. 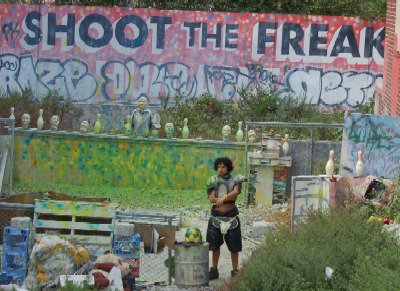 Again, the great fun of the booths and barkers cannot be understated. One such booth was dubbed “Shoot the Freak,” where a young man was employed to dodge paintball pellets fired from gleeful rifle slingers. There was no apparent incentive to the participants — no stuffed animals, no kewpie dolls — other than the satisfaction of nailing a guy running around in a funny purple suit. It is difficult to fathom such a gleeful carny-style impulse at work at a Six Flags amusement park.

The Wonder Wheel looms large, proudly advertising its eighty year history without a single accident. But it isn’t your typical Ferris wheel. One can choose stationary or swinging seats, but why would anyone select the former? The seats swing raucously in the wild windy air. The breeze is fantastic on a sunny day. And despite the fact that this is all perfectly safe, the noisy ratchets, to say nothing of the swift parabolic thrust several hundred feet in the air, suggest that the wheel could all fall apart at any time. The Wonder Wheel, then, offers a near perfect balance between anarchy and dependability. Accept no substitute.

The Cyclone, situated at Astroland Amusement Park, makes the Giant Dipper at the Santa Cruz Beach Boardwalk resemble a benign and inoffensive cousin, which is interesting given that the Dipper was constructed only three years before the Cyclone. I have no idea if the Cyclone’s construction team felt the need to up the ante, but I will say that the Cyclone is pleasantly brutal, its undulations lurching you about with great force like an unexpected round of rough sex.

Nathan’s, the fabled hot dog stand, awaits you close to the entrance of Deno’s Wonder Wheel Amusement Park, with a southern cousin, or perhaps a neglected stepchild, situated near the beach. But its laminated plastic menus and undistinguished weiners are a far cry from legendary.

I was informed by a few people that Coney Island is beginning to enter some age of gentrification, but they were unable to cite specifics. Even if such efforts manifest themselves, I don’t think they can last. I observed a thirtysomething police officer in a golf cart-like vehicle chatting up a bikini-clad twenty year old near the beach. It was a gesture that would be untolerated at Disneyland, perhaps confused with statutory rape. But at Coney Island, it’s par for the course — in large part because the sticks don’t seem to be lodged up any particular rectal cavities. They’re reserved instead for a far more important foundation. 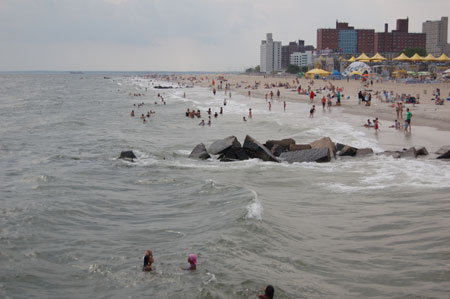 [RELATED: Rebecca’s Pocket points to this troubling article, which suggests that the state fair’s days are numbered.]

[UPDATE: Richard Grayson sends terrible news that there are unfortunate plans completely at odds with the Coney Island I’ve described above. More here.]