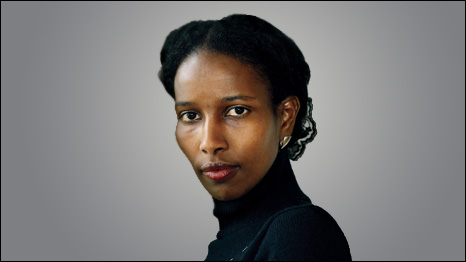 Why is Dwight Garner blaming an author for his failure to understand essential complexities about free expression and Ayaan Hirsi Ali?

In the January 15, 2012 edition of The New York Times, Dwight Garner reviewed Deborah Scroggins’s Wanted Women — a dual biography of Ayaan Hirsi Ali and Aafia Siddiqui — and leveled some irresponsible, reckless, and highly misleading charges at the book’s author. Accusing Scroggins of “a rowdy assault on Ms. Hirsi Ali,” Garner set forth a litany of misleading modifiers at Scroggins, claiming that she had accused Hirsi Ali of “being imperious, deceitful, egomaniacal and divisive, of whipping up racial hatred through her unsubtle criticism of Islam.”

The problem with Garner’s attack is that he has failed to dredge up any significant facts to support his foolhardy fulminations even as he has simultaneously omitted two key points in the record: (1) that Hirsi Ali lied about her asylum application, yet used this story to garner sympathy and eventually earn a Parliament seat in the Netherlands to promote her over-the-top attacks on Islam (motivated by a legitimate concern for radical Islam’s oppression of women which quickly grew to subsume considerations of Islamic pluralism: a peaceful pluralistic option that doesn’t work the first time doesn’t necessarily have to be thrown out with the bathwater) and (2) that Hirsi Ali demanded costly and possibly unreasonable overseas security while she was in the United States. (In overlooking the second point, Garner slams Scroggins by claiming that she “swings lower” in pointing out that Hirsi Ali “visited an ‘expensive hairdresser’ to straighten her hair.” As Development Cooperation Minister Bert Koenders stated at the time, “Hirsi Ali is protected in the Netherlands. She herself has chosen to go to the U.S.” It’s no surprise that Garner, fixated like a sad middle-aged man on Hirsi Ali’s looks rather than the vital crux of her actions, would be more interested in Hirsi Ali’s minor image-conscious offenses rather than her quite serious efforts to milk money from the likes of Nicholas Sarkozy and Benoit Hamon — the latter involving the unsuccessful establishment of a 50-million-Euro security detail. As Scroggins observes, Hirsi Ali’s appeals to various governments were futile. She returned to professional speaking with her tail between her legs, factoring the security costs into her lecture fees, before the Foundation for Freedom of Expression was established, in part, to solve the money problem.)

A more competent reader than Garner would easily comprehend that, in asking critical questions of Hirsi Ali, Scroggins is considering the need for free expression (which would include the 2004 film, Submission, which Hirsi Ali wrote for Theo van Gogh and resulted in van Gogh’s barbaric murder — another key fact elided from Garner’s review) along with the impact of unfettered words. None of Scroggins’s investigations state or implicate that Hirsi Ali should be silenced. But if a prominent figure is promoting Muslim liberation within Enlightenment values, shouldn’t the evolution of these thoughts be examined? Bear in mind that, in her Dutch political career, Hirsi Ali abandoned the Labor Party to join the more conservative VVD, viewed in the Netherlands as the “party of businessmen.” In 2003, as a member of Parliament, Hirsi Ali called Mohammed a “perverse tyrant.” And her belligerence didn’t stop with invective. As Hirsi Ali confirmed in a 2007 interview, she hoped to abolish Article 23 of the Dutch Constitution, which guaranteed freedom of education, and sought to close down all Muslim schools — even as she refused to consider reports which “emphatically stated that Islamic schools are no cause for alarm,” with most maintaining an open attitude towards Dutch society. And as she revealed in her book Infidel, Hirsi Ali’s hard-line stance against basic rights was often predicated on specious work experience:

I had also proposed dramatically reducing unemployment benefits and abolishing the minimum wage. From my experience as a translator with welfare cases, I knew that easy access to generous unemployment benefits leads to a poverty trap: people in Holland often make more money from welfare than they would in actual jobs. Everyone told me these ideas were far too right wing — meaning that they would lead to a society polarized between wealthy and poor, teeming with beggars and very rich people, with lots of violence and exploitation.

All of these facts are plainly stated in Scroggins’s book and are helpfully backed up by endnotes (many of which I have consulted for this piece). Scroggins’s book is a welcome reconsideration (rather than an attack) of a complicated individual who charmed the pants off many intellectual figures. Consider how Anne Applebaum (“a Muslim immigrant who embraces Western culture with the excitement of the convert” — a remarkably rose-tinted summation), Christopher Hitchens (“calls for a pluralist democracy where all opinion is protected” — but not moderate Muslim schools), and Sam Harris and Salman Rushdie (“one of the most poised, intelligent, and compassionate advocates of freedom of speech and conscience” — but not when it comes to freedom of religion, even when separate from state) all proved mostly unwilling to perceive any flaws in their cherished heroine. Is Hirsi Ali’s Manichean ultimatum between Islam and liberation tenable? Are all strands of Islam radical, dangerous, and anti-Semitic? Isn’t the truth more subtle and less one-sided? These are the questions which Scroggins’s book raises in examining two significant figures.

Garner has chosen to simplify these very important issues, reducing them to the muddled and tendentious viewpoint of a country bumpkin incapable of comprehending the other side of imperialism. He cannot seem to see how extreme fears of Muslims (like any extreme hate, including radical Islam) can produce figures like Geert Wilders or, even deadlier, Anders Behring Breivik (Garner suggests that Scroggins has laid the Breivik association “at Ms. Hirsi Ali’s feet” when she is merely pointing out that Breivik believed she should win the Nobel Peace prize). These intricate concerns require more than cheap dualities. They require serious thinkers, not suburban burnouts whose view beyond Levittown isn’t altogether different from a Helen Bannerman vista.