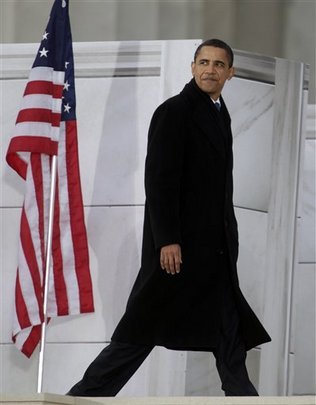 Today is the beginning of a new epoch. The slate is clean, the road ahead is paved with shrapnel, and the body language between the Obamas and the Bushes just before their preinaugural coffee is wonderfully comical. While I retain my hearty skepticism about politics, I can say, without reservation, that I am very proud to be an American right now. The last eight years nearly destroyed my faith in government, transformed me into something of a fiery curmudgeon in matters pertaining to politics, and made me wonder if we could ever set this country straight. But this morning, upon seeing Obama walk into the White House, there was one overwhelming and seemingly inconceivable thought: My god, this man will be our President.

Let us hope that he will not blow it. Let us also hope that the American people will live up to the tenets of the Constitution and consider every decision made by President Obama, who possesses every sign that he will be a first-class communicator. I believe that President Obama will be transparent about his actions and atone for the last guy, who was secretive and uncooperative and will almost certainly have a lonely existence for the rest of his days. It is a faith that I place today and that may be discarded tomorrow, for I will be watching the new guy like a hawk. Nevertheless, I can’t even begin to describe what the climate shift means. We have moved from an obdurate-minded autocrat to a man who may have ushered in a new political era of national concert and civil disagreement.

My nation has snapped out of an eight-year nightmare. Let us hope that this will translate into a new age of maturity and civilization. Let us learn from our mistakes and emerge stronger than we were before.