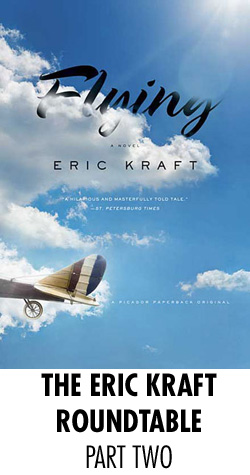 (This is the second of a five-part roundtable discussion of Eric Kraft’s Flying. Part One, Part Three, Part Four, and Part Five can also be read.)

I’m going to throw another topic out there for discussion, because I’m only one third of the way through Flying and I’m struggling.

Here’s my question: What do you make of the narrative voice?  Or voices, if you identify them differently?

I ask because I’ve been reading the book off and on for a month now, but have only just begun On the Wing, not for lack of effort, but for the fact that all the way through Taking Off I found myself gritting my teeth — I utterly hated Peter Leroy, mostly because of the way the book’s sentences rang in my ears.  The writing seemed to me slick, even smarmy, and all I wanted to do was get it out of my head.  I kept trying to put my finger on what it was that bothered me so much, that made me grit my teeth as if I’d OD’ed on Smarties, but I didn’t get very far in my quest to figure out what was making me react in such a strange way.  The closest I came was when I decided I found the captions to the pictures annoying.  I liked the pictures, particularly the doctored pictures of old magazines and books, which were clever and surprising, but the captions weren’t usually necessary, and I resented being given redundant information.  I wanted them to do something more, to be in some sort of conflict with the pictures or the narrative, to add complexity rather than just tell us stuff we already knew.

But that’s primarily a problem for me only with the captions.  My problem with Peter’s narration is harder to define, but I can say that the voice seems awfully, well, nice.  Like Leave It to Beaver or My Three Dads.  Perhaps this is because, given how fragmented my reading of the book has been, I haven’t been able to get enough sense yet of what’s at stake within it, where its edges lie, and so perhaps I’m missing some big irony or subtle clues to an unseen darkness.  (Which says more, I expect, about me than the book — “pleasant” is not, for me, a term of praise for art.)  Perhaps On the Wing and Flying Home will add some vinegar.  I haven’t yet been able to make myself care about Peter’s various embroideries of the apparent “truth” within the novel’s story because I haven’t yet been able to figure out why it matters whether he’s “truthful” or not, or what effect this should have on me as a reader.

Or maybe it’s just that the book is comedic and I don’t get the comedy.  (Is it comedic?)  It hits me in a similar way that Confederacy of Dunces, another book I found far more annoying than amusing, did, and maybe there’s some sort of litmus test for this kind of thing — I know plenty of people who find Confederacy uproariously funny and great fun to read, but I’d rather spend a day watching water boil than read that book again.  Similarly, I adore Catch-22 and know plenty of people who would rather read Confederacy of Dunces whilst standing in boiling water than read Heller’s novel, so…

It’s late at night and I’m rambling; my apologies.  I merely wanted to ask you all for some reports of your reading experience of the book — I don’t know if it will help me get beyond my allergy to Peter Leroy, but I am honestly curious to know how people perceived the book’s narrative voice — charming? engaging? amusing? enthralling? — because I feel kind of stuck in how I first heard it, and there’s no way I’ll make it through the next two novels if I continue to hear it that way.

I’m speaking to Matthew Cheney first, because his message pops up first in my gmail.

If you’re beginning On The Wing, and Peter Leroy grated on you all through Taking Off, I doubt you’ll enjoy you the rest of it. If it irks you, I would put it down. (Ed may not agree with me on this, because if you push forward, hating it, you might contribute more to the roundtable than all those saying, “It’s so great, so hilarious!”) Generally, I make it a rule to give a book 100 pages–I’m a writer, not a book reviewer–and past that, if I don’t like it, I put it on the shelf. A year or two later, I might try it again. Frequently, it’s that second or third time that the book grabs me.

This has convinced me that fiction is even more subjective than real life, which strikes me as so subjective that (quoting Sarah and Ed and Brian) it compares to walking on quicksand.

In reference to Ed’s question about Peter possibly being tragic, notice that: No one dies; Albertine has proper health coverage; and Peter is far better off as a muddleheaded dreamer than Big Bob, once head of the Muddleheaded Dreamers Motorcyle Club now the “world’s foremost [clinician] for Pre-Traumatic Stress Syndrome.”

Dr. Bob Wylie suggests a tragic if tangential Quixote-type more than the self-aware, self-conscious but all the happier for it Peter Leroy.  Although once you bring up “swagger,” Ed, I see various parallels between Peter Leroy taxiing the country in Spirit and Quixote charging on horseback. I read Don Quixote in college and at that time found it likewise hilarious, perhaps because the teacher presented it that way. Cervantes was skewering the popular (and purportedly kitschy) adventure stories that were popular in the early 17th century. I’m sure there must be dissertations galore comparing those cheap oral tales with DC or Marvel superheroes and/or the 1950s real-life versions of Kraft’s Bold Feats magazine.

Easy to imagine that someone might not be in the mood for these hi-jinks, Matthew. And because Kraft does deftly address high and low culture, questions of taste, time, and philosophy in such a seamless, fast-paced style, his prose might come across as “slick.” But that’s the risk anyone takes telling stories.

I promised my husband to keep this short. Ha-ha. The poor man suffered along as I insisted upon trying to read passages out loud to him, but mostly giggled..

Among my favorite passages is the one where Judge Whitley takes Peter outside and questions him about Faustroll.

“You have sailed in the doctor’s boat, across the Squitty Sea?…soujourned in the Land of Lace?…

“You don’t want to go waving this book around. People are going to take it the wrong way….”

Then, too, as someone who too late in life attemped rollerblading too fast and too often, giving it up only after a few full-fledged concussions and a shattered wrist, I especially relished the dog-boarding business.

Since I began to read Flying by Eric Kraft late last month — an author previously unread by me — I have begun ten or twelve books, 6 or 7 of which I read to their ends.  So, it seems clear this narrative hasn’t exactly captivated me. Like Matthew, I find a few things about this novel unfelicitous — not the least, the, what I experience, kind of leaden exuberance and as Brother Cheney opines, smarminess.

It occurs to me I was asked to participate in another one of Don Eduardo’s roundtable confabs — around Pynchon’s Against the Day. Which I see as having a similar tonality — also unpleasing to me

Like Kathleen, I see it as perfectly fitting that there is a panoramic range of response — exactly what makes a  convincing case for the subjectivity that attaches to fiction (and other things)

I am struck, and a bit bedazzled, by the high wattage of the illuminating discourse — which, if it signals the type of book this is, makes it even less likely for me to complete.

I noticed that Proust and Nabakov’s names were bandied about — also writers I have not (I am still trying to account for any significance to the fact I have read virtually no Updike— I have learned to offer this guitlessly) — though I would wager I have read more Nelson Algren than most people.

It is, of course, pleasing that a number of readers enjoyed this writer and have things to say and that other people have things to say about those other things. The whole point is I gather indeterminate —as the immortal Thomas Waller shrewdly observed, “One never know, do one?”

I will dip into this book, perhaps even advancing to various places in the novel — though from what I have read in the commentary, this story seems to be intricately constructed and interwoven with all manner of minute details and cutesy nomenclature. I will certainly look forward to the polylogue, as many of the contributors are people known to me to be sensible,  erudite and useful observers.