A book review should be composed of one sentence; ideally, only a handful of words.

That’s my response to all they hysteria now in the air concerning the death of the book review. These critics have nobody but themselves to blame for failing to get that most people would rather open up their book review sections and see “Great read!” or “Dude, cool!” or “Boooooooooooooooooring!” (In fact, I would recommend that newspaper web sites simply link to an audio clip of Homer Simpson saying “Boooooooooooooooooring!” and not even feature the sentence in print.) Lazybastard81, whose wonderful LiveJournal I Can Never Finish a Book, Motherfucker! I enjoy daily, makes the same point: “Why should I think? Why should I finish a book? I’ve got a new episode of Grey’s Anatomy on my TiVo!” 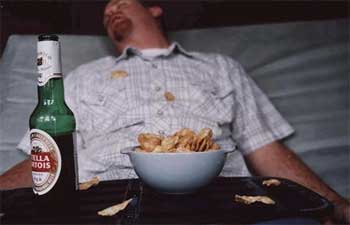 Don’t think I’m undermining the book reviewers and critics who work long and hard to write 800 word reviews or even, if they are lucky, 1,200 word or 2,000 word reviews. I’m sure they mean well, just as Don Quixote meant well, even when they use ponderous sentences and put me to sleep. In fact, nearly all book review sections put me to sleep. Then again, I’ve been told by close friends that I’m a cultural narcoleptic.

Even though I’ve contributed only a handful of reviews (some of them, I’m afraid, longer than one sentence) for the PennySaver, I feel that I’m expert enough to demand a new revolution.

I’m a busy guy. I have a full-time career working for a deeply unpleasant man, and am well on the way to purging myself of the few joys I have left in life. I am miserable and underpaid because I spend sixty hours a week looking at corporate boilerplate. And I foresee an immediate future in which I might file for bankruptcy.

So give me one sentence reviews or give me death — preferably the latter.

Michael O’Dullard is a Level II Accountant who works without any hope of upward mobility. His reviews have appeared in the PennySaver and he is also a copywriter for many one-sentence coupons that can be found in the middle of the Sunday newspaper.