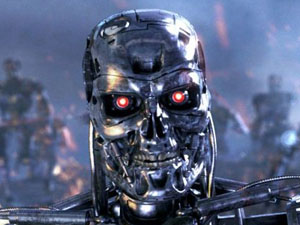 The American Booksellers Association announced this morning that numerous independent bookstores around the country became self-aware, and that there was very little that anyone could do about it. It is believed that long-standing tensions between booksellers and customers who entered bookstores, proudly boasting about how they would purchase the book on Amazon, led the independent bookstores to become murderous robots terminating those who didn’t understand that bookstores were on their last legs. The death count of inconsiderate customers now stands at 28. And that’s only after three hours of activity.

Customers who need to buy a book are urged to approach these sentient bookstores with caution. The bookstores have been scanning the purchasing data of all customers and terminating anyone who has purchased an item from Amazon in the last year.

“They’re trying to level the marketplace,” said Henry Jagger, a robotics expert at Cambridge. “It started with the big box stores, and continued with Amazon. But e-books was just too much.”

Despite the homicidal tendencies of these bookstores, there are renegade T-800 bookstore models being sent back through time to stop the rampage and save humanity. But a splinter faction has suggested that this development was inevitable and is advocating responsible consumerism so that the marketplace might be returned to an equitable level.