[EDITOR’S NOTE: Bat Segundo has been particularly vociferous of late and wanted the opportunity to clarify a few issues that had apparently cropped up during the BEA podcasts. I sat down with Bat Segundo at a dive bar (Freddie G’s, I believe it was called) about a mile away from his Motel 6 room. Bat told me that I had to buy him two shots of whiskey before he would answer any of my questions. Fortunately, once the Jack had trickled down his throat, he permitted me to press the orange record button on the tape recorder.] 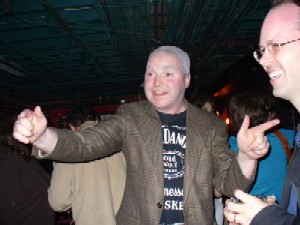 You’re clearly unhappy about introducing these podcasts. Why keep doing them?

Because I’m a professional! Back in 1992, there was a man named Clive Harris. He ran a radio station and he was the last man in town who would hire me. Anyway, Clive told me that I was washed up, that I had nothing in the way of prospects, and that I should work at an Arby’s somewhere. As it turned out, I did begin an interesting career in the fast food business and became assistant manager.* I did other things too. But I don’t think I should mention them here. Then one morning, as I was recovering from a nasty hangover, I got a call from a Russian producer who wanted to hire me for this new podcasting thing. And so it was either continue my hard work at Arby’s or do this podcasting thing. As you know, I opted for the latter. And I’ve been miserable ever since.

But surely doing radio work is preferable to slinging burgers.

I was assistant manager! I hired other people to sling burgers. Have you heard of Milton, sir? Or a Foster’s contract?

I think you mean Faustian contract.

Whatever! It’s the Young, Roving Correspondent who knows all about this literary stuff, not me. I’m just the stiff they hire to introduce the show.

Why aren’t you the one conducting the interviews?

Because I have a lousy track record. Or so they say. The one and only time I conducted an interview, it was with a Hollywood actress who shall remained unnamed. She was in town to promote some such film that I hadn’t seen and I didn’t cared to see. All I knew was that there was this woman sitting in my studio with large breasts. Now I’ve seen a lot of breasts in my time and I won’t tell you exactly how I obtained this skill, but I can tell absolutely when a girl’s got fake tits. Anyway, I was growing bored with this woman and I then asked her if her tits were real. She refused to indulge me. So I had one of our engineers play a particular frequency, which somehow caused this woman’s silicone gel implants to rupture. I suspect that there was some preexisting condition that caused the rupture. But since much of my savings was, how should I say this, tied up in investments, I couldn’t hire a decent attorney. I was fired on the spot, of course. And the case was settled out the court. But in the end, I was right about the tits. Of course, nearly everyone in the radio business knows what happened.

If you’re such a connoisseur of women’s anatomy, why then did you kiss Matt Cheney at the Big Hunt?

He looked like he needed it! In Russia and Europe and a few other countries, men kiss other men all the time. Or so they say. I don’t know why it hasn’t caught on here. But I can tell you that during our trip to the Mojave Desert, Jorge showed me a few things that caused me to re-examine certain cultural stigmas.

What did he show you?

A profoundly new way of thinking.

Can you elaborate on this?

Not really. These are really personal questions though, don’t you think?

Is there then a special someone in your life?

You could say that. I have a strong attachment to this flask in my pocket. As a matter of fact, it was Clive who gave it to me.

Okay. One final question then. Do you feel that you’re getting upstaged by Updike?

There is one thing that keeps me going. Updike’s an old man. He will likely die before I do. He may have the upper hand now. But rest assured that the grave is the inevitable destination for the human spirit.

Thank you very much, Mr. Segundo.

Oh shut up and buy me another drink.

* — Note: I contacted Arby’s Corporate to see if they had reference to any employee named Bat Segundo. They told me that there was nobody who had worked by that name in the past twenty years. So was Bat lying about Arby’s? Or was he working under another name?