[EDITOR’S NOTE: Here at Return of the Reluctant, we do our damnedest to keep on top of the latest literary trends. (Well, not really. We’re fundamentally lazy, but ideas are spawned nonetheless.) With Neal Pollack and Steve Almond now turning their hands to the heartwarming genre of “alternative” thirtysomethings who have spilled their seed and now feel compelled to splatter their paternal woes onto the page, we’ve recruited Wayne Chestnut, an MFA dropout who still harbors some dim hope of literary credibility, to drop in from time to time. Here is his first entry.]

Last night we put Jilly in front of the TV, something Elaine and I hope to do more often so that we can avoid real parenting and snort a few lines off the bedroom dresser mirror. Don’t get me wrong. I’m a very happy father, and I realize every day that within my child I can see things about the world that I haven’t seen before. Particularly if I’m stuck in a k-hole or if I’m in a bourbon-induced haze. Drugs are good this way. All parents should try them. Sometimes being a coked out asshole has its benefits. It gives you the strength to see beauty, and it gives you the beauty to have sleazy fantasies that go well beyond your parental responsibilities, which are just so fucking incredible. And if you’re not a parent, you simply cannot understand. It’s a bit like being gay.

I think of things like, “Holy shit! I have spawned and she’s so beautiful. And if I weren’t her dad, and she were a few years older, maybe she’d be a great fuck! How am I going to deal with her when she starts to develop into a woman? Will I then still be capable of an erection without Viagra?” You see, fatherhood isn’t nearly as banal as you think. Take that, Gawker! 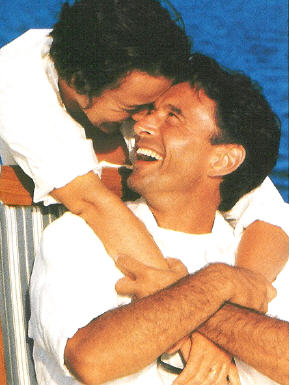 Sometimes I look into Jilly’s eyes and I find patterns. Sometimes she burps into my face, and it’s the timing of these burps that reveal good stocks to invest in. I then communicate these patterns to my broker. It’s a bit like that story I once read in a class, “The Rocking-Pony Winner.” Except the kid doesn’t die at the end. If Jilly keeps this up, then I should be able to retire before I’m 50.

But I’m sort of digressing, which is what you’re supposed to do in a blog. I’m a writer. I authored a book containing short stories, all of them about slacker protagonists who eat corn chips while listening to goth industrial. Every single story had that theme. So I know a few things.

Like I said, Jilly was in front of the television. It was a large television. A good flat-panel screen. The kind of television that only a family of three should invest in. I know this because this is what the man at Best Buy told me. I foresee a great future ahead, as Jilly becomes less cuter (the terrible threes, they call it, with lotsa temper tantrums) and I start to fool around on Elaine during my midlife crisis. But I’m a dad, first and foremost. And I’ll clean up any mess that Jilly pukes up before heading off to a clandestine appointment at the Days Inn. I’ll tell Elaine I’m working late and, if I’m feeling in a good mood, I’ll even do the dishes.

Anyway, where was I going with this?

I look at this television and realize every day that it’s probably a better parent than I am. And to think that it didn’t come out of a uterus! It was built by a bunch of guys at a factory. I have one channel and I have to sleep. The television has about 500 channels and it never sleeps.

Jilly will grow up seeing this television as better than me. And for what? Because I use it as a surrogate babysitter? Because I enjoy recreational drug use?

Well, maybe. But I’m the one who sired Jilly. Make no mistake.