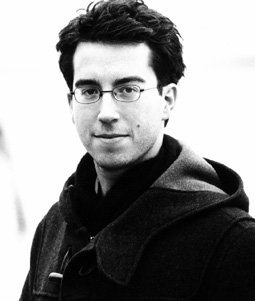 This morning, a visibly frustrated Jonathan Safran Foer cooked himself some sausage and bacon for breakfast, vowing to the world that he would begin eating meat. “They’ve been making fun of me for the past few years for being young and successful,” said Foer, whose growling stomach was clearly not digesting the sudden carnivorous eating habits very well. “I want to show those bastards that I mean serious business.”

Foer’s wife, Nicole Krauss, revealed to reporters that she didn’t see this coming.

“I certainly didn’t expect him to turn to pork right before passover,” said Krauss, who was quite adamantly against eating meat. Krauss, however, did confess that Oprah had made the right move bringing baby-in-a-spit narratives to surburban audiences. Staffers from the Wall Street Journal plan to have Krauss take a polygraph test.

When a journalist remained unconvinced of Foer’s meat-eating habits, Foer grabbed an expensive-looking knife, proceeded to slice his wrist open and began supping of his own blood.

“You see! You can call me Jonny “Hard Core” Foer from now on, you little prick!”

The journalist then apologized. He worked for the New York Sun.