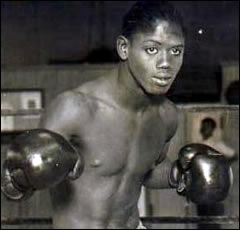 On January 6, 1910 — precisely a century ago — the Cuban boxer Kid Chocolate proceeded to undergo a ten-round bout with his mother’s uterus. He was declared the winner by a doctor (no referees were available in the hospital) and was awarded an umbilical snip for his preborn pugilism. It is safe to say that Kid Chocolate is no longer alive. Indeed, he has not been alive for a good twenty years. But there was a time in which Eligio Sardiñas Montalvo — once referred to, in all seriousness, as The Cuban Bon Bon, a sobriquet that could not easily fly today — was undefeated. But his opponents were better and he began to lose.

Kid Chocolate would be co-opted by Clifford Odets for his play, Golden Boy, where Kid Chocolate would be synthesized into the Baltimore Chocolate Drop. Odets introduces this composite by having the boy say, “The Baltimore Chocolate Drop is not as good as you think he is.” I would have asked Odets, “Is this entirely fair?” A December 24, 1959 issue of Jet reports that Kid Chocolate owned four homes at the time. I do not know whether or not he lost them. But one of the factors that motivated Sugar Ray Robinson to become a boxer, according to Herb Boyd and Ray Robinson’s Pound for Pound, was Robinson learning that Kid Chocolate made $75,000 for a half hour of fighting in the ring.

That’s $2,500 a minute to have someone beat you to a pulp before a crowd. Is it worth it? I think most people would say so. Without accounting for inflation, Kid Chocolate made more from one fight than I have ever made in a year. If I had to fight only one fight (30 minutes a year), at the risk of brain damage, a beaten corpus, and a warped skull, but I was able to earn that kind of money, then I might seriously consider Kid Chocolate’s rates. Then again, if I were to suffer brain damage, then I wouldn’t be able to write. So perhaps it’s not worth that kind of blood money. Even if I were to spend a good deal of time getting in the appropriate shape. Which I imagine would run into my reading and writing time. I would be a rather silly boxer.

By 1965, Robinson was broke. He had made $4 million boxing and it was all gone. Robinson may have been inspired by the wrong detail. Money (or the fantasy of earning a lot of it) isn’t really a good reason to make a major life decision. But Robinson, to his credit, lived longer than Clifford Odets did. Kid Chocolate lived longer than both of them. I have a feeling that Kid Chocolate simply liked to box. He had numerous flashy moves. You can look all this up if you’re curious.

Given the choice between Kid Chocolate (or even Sugar Ray Robinson) and Clifford Odets, which one will be more remembered a century from now? Or will any of them be remembered? All three individuals interest me. But I am not sure if anybody will be interested in them one hundred years from now. There may be some boxing scholar sifting through boxes (that is, if they are preserved), attempting to put together some comprehensive history. But will boxing have changed? If the theatricality of “professional” wrestling can shift dramatically to extreme elements involving nails, glass, and boards in a few mere decades, then it’s safe to say that boxing could just as easily become more gloves-off in the future. So will anybody be interested in past versions?

It is also worth observing that these fights tend to interest spectators as they unfold in the present. If you already know the fate of the match, then the boxing bout loses its appeal. On the other hand, Odets, being a playwright who planted figures in the crowd for some of his work, was also interested in the present moment. So is it entirely fair to place Odets above the boxers?

I had originally set out to merely observe that it was Kid Chocolate’s 100th birthday. Should I live another fifty years (a possibility, but one never knows!), I will remember Kid Chocolate on his 150th birthday and perform greater justice than this silly post assembled in the early morning hours.