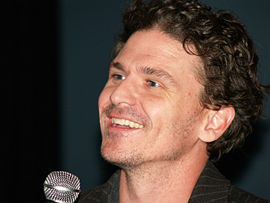 In recent months, Dave Eggers has continued to insist that newspapers, contrary to recent developments, are not dying. In May 2009, Eggers spoke before a crowd and announced, “If you are ever feeling down, if you are ever despairing, if you ever think publishing is dying or print is dying or books are dying or newspapers are dying (the next issue of McSweeney’s will be a newspaper—we’re going to prove that it can make it. It comes out in September). If you ever have any doubt, e-mail me, and I will buck you up and prove to you that you’re wrong.” This prompted many, including the Washington Post‘s Ron Charles, to take Eggers up on his offer and inform him of grim realities. Eggers failed to live up to his end of the newspaper-boosting bargain, sending out a boilerplate email in response to inquires from interested parties. This email, rather predictably, offered nothing more substantive than the foolhardy optimism that one generally receives from a faith healer or a used car salesman.

If prosperity remained just around the corner, one could at least take comfort with the handsome issue, which came, as promised, with contributions from Stephen King, Nicholson Baker, and William T. Vollmann. But the more important question of whether the San Francisco Panorama was profitable was swept under the rug. Then last month, The Awl‘s Choire Sicha took a hard look at the numbers, pointing out that the Panorama required $111,000 to publish 23,000 issues. With advertising revenue of $61,000, the Panorama took a loss of 33 cents per issue. Additional problems came from the $80,000 editorial costs, which, as Sicha demonstrated, had to be split among 218 contributors. After subtracting an estimated 12 cents/word paid for contributions, noted Sicha, there was a mere $38,000 for the seven staff members, who all worked on the paper for four months. How many of the people who worked on the Panorama were unpaid? It was never officially disclosed, but Sicha’s calculations demonstrated that Eggers’s vision was nothing more than a puerile and unworkable fantasy.

None of this has prevented Eggers from flapping his mouth in interviews, continuing to claim phony expertise on how to save newspapers. And as Eggers has continued to blab, a more troubling vision, one that involves paying the writer nearly nothing, has emerged.

In an interview with The Onion A/V Club, Eggers points to the ostensible simplicity of readers “pay[ing] a dollar for all the content within, and that supports the enterprise.” But as Sicha demonstrated in December, the enterprise clearly wasn’t supported by reader dollars. Could it be that a web-based model, one that cuts out an expensive $111,000 print cost, might, in fact, permit some of that money to be given to the writers and editors who perform their labors? Not in Eggers’s view. Sayeth Eggers: “The web model is just so much more complicated, and involves this third party of advertisers, and all these other sources of revenue that are sort of provisional, but haven’t been proven yet.” But is it really all that complicated to create an Excel spreadsheet listing the money coming in from advertisers and the money that you pay out to contributors, and use a formula function to determine if the enterprise is profitable? Maybe if you’re six years old or you don’t know how to use computers. But even if you’re computer illiterate, there’s this nifty little innovation called double-entry bookkeeping that’s been around since the 13th century. And you can even perform it on paper — if, like Eggers, you “just have an affection for paper.”

But Eggers’s remarks in the Onion interview reveal that he isn’t really interested in paying writers. He notes J. Malcolm Garcia, a correspondent heading to Afghanistan who offered to write something for the Panorama. As Eggers boasted, “it doesn’t even cost that much, because he was going anyway.” In other words, Garcia’s work — the substance of his investigations, the time he took in reporting — can be undervalued because he just happened to be in the region. This is a bit like asking a doctor to cut his rates because “he happens to be in the hospital” or asking your next door neighbor to perform professional services because “he happens to live next door.”

And yet Eggers claims that he has a daily respect for the people who have toiled at sweatshop wages for his beloved Panorama. Professional respect doesn’t emerge when you’re paying your editors below minimum wage or you adopt an assumptive attitude that, because some journalist happens to be in the area, you can undercut his labor. It emerges by paying the writer what she is worth. And if Eggers insists that “we’re programmed to declare something dead once a week,” he may want to look at his own programming, which has continued to perform its financial miscalculations over the course of seven months. If Eggers values the experience of old-school journalists, as he indicates in the interview, then why not pay them the money that their experience is worth? Perhaps because, contrary to his “tidy” conclusions, Eggers doesn’t know how to balance numbers and doesn’t know how to run a profitable newspaper. He doesn’t comprehend that journalism isn’t some casual hobby to be picked up like stamp collecting, but an occupation that requires dutiful compensation.