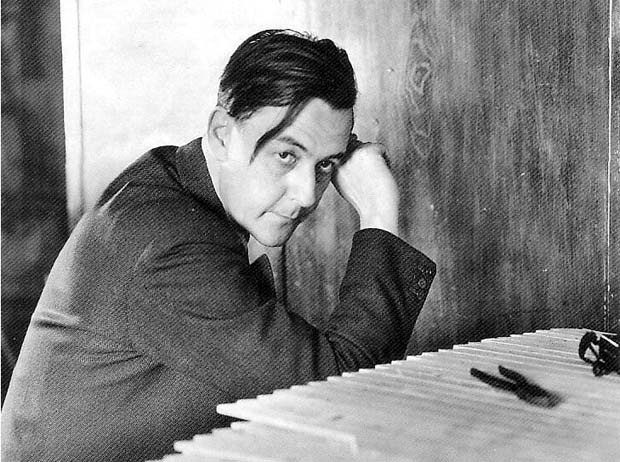 In the next installment of the Modern Library Reading Challenge, we tackle Loving and find ourselves lapping up Henry Green’s stylistic exactitude like an eight-year-old let loose in a candy store.

(This is the twelfth entry in the The Modern Library Reading Challenge, an ambitious project to read the entire Modern Library from #100 to #1. Previous entry: Midnight’s Children)

Reading Henry Green’s Loving is a bit like going through a valise that a hardcore neat freak has spent many years packing for your once-in-a-decade vacation. You need to extract the chinos for that last summer blowout, but will your unseen friend berate you if you rustle the crisp blue oxford shirt from that fixed and implacable perch just above those promising pants? What Green has given us is a delicate book, difficult to unpack in a thousand words. It is so marvelous that you could spend a lifetime talking about it (certainly many have spent lifetimes teaching it). On the other hand, compared to Finnegans Wake (a Modern Library obligation so massive that I have started reading it early, devoting a Tumblr to my ongoing annotations), Loving may as well be a Parker novel.

We know from the outset what we’re in for. The book’s first four paragraphs alone introduce us to Eldon, Ellen, Miss Agatha Burch, Charley Raunce, and “Bert the yellow pantry boy” (a phrase almost suggesting a new band to argue about on Brooklyn Vegan) — all hired help within the sprawling confines of Kinalty Castle, a manse manifesting upstairs and downstairs shenanigans that is situated about a hundred miles from Dublin and carrying on during the early days of World War II (when Ireland was neutral). There is also an Edith and a Evelyn, perpetuating Green’s affinity for character names starting with the second vowel. And not long later, we meet another Bert who arrives at this estate. We learn that the IRA possesses two interpretive acronyms.

This perceptive flexibility within names is matched by a perceptive flexibility within sentences, many divested of commas: “Then one morning while they were at their dinner in the servants’ hall that telephone began to ring away in the pantry.” Green’s style suggests a fixed quality, but what kept me reading was the possibility of disorder and transgression. Miss Burch, the martinet-minded head housemaid, tells us, “Take someone out of their position in life and you find a different person altogether, yes.” And, yes, as peacocks and rings disappear and as couples are discovered in flagrante delicto, we learn that no amount of order, whether through style or action, can disrupt life’s inevitable antics. Different people are indeed revealed when they hew outside the hues with near farcical commitment. This is perhaps one of the reasons why Green has given Charley Raunce, the head footman pushing forty, eyes of differing color (“one dark one light which was arresting,” nearly matching the mysterious red and black notebooks containing shady business correspondence and creative accounting that Raunce is trying to make sense of). Raunce, a character who I liked a great deal, is sometimes good at tricking his employers (he refuses to go by the name “Arthur” upon taking Eldon’s post and offers additional demands to his masters, who are equally dismissive of Raunce and his peers out of earshot) and is sometimes a bit cruel (especially in relation to Miss Burch). But like any of us, his words and actions are understood, justified, and humanized by his love. He sends money to his mother and urges her to purchase an Anderson shelter. He is concerned about a sister who works in a gun factory. He confronts his love for Edith and the manner in which he proposes is strikingly diffident:

“You have it any way you want,” Raunce explained. “I thought just to mention her that’s all, Mrs. Charley Raunce,” he announced in educated accents. “There you are eh?” He seemed to be gathering confidence.

From passive explanation to “educated accents” to a nervous “There you are eh?” to prototypical confidence. Words, in some instances, are no match for living. Unsurprisingly, this was something that Green thought about a good deal. As he wrote in his memoir Pack My Bag:

Prose should be a long intimacy between strangers with no direct appeal to what both may have known. It should slowly appeal to feelings unexpressed, it should in the end draw tears out of the stone, and feelings are not bounded by the associations common to place names or to persons with whom the reader is unexpectedly familiar.

In a 1958 Paris Review interview, Terry Southern suggested that some people had referred to Green as a “writer’s writer’s writer.” And it may be this commitment to the unexpressed and to the unbound that has made Henry Green a tricky and needlessly neglected writer, despite his well-earned presence on the Modern Library list.

Weeks ago, I asked a savvy friend, who was rightly chiding me for my wine-infused malapropisms, over dinner if she had read Loving. She confessed that she had and that she had not understood it. And I must confess that it took me three attempts before I was in the right mood to finish Loving, with the final and fortuitous push occurring as I was housesitting in the Hudson Valley.

But my efforts were worth it. Because once you slow to Green’s pace and begin to understand that nearly every sentence contains some insight, Loving reveals itself in interesting ways. Just before proposing to Edith, Raunce says, “But it’s not the truth that matters. It’s what’s believed.” This paraphrase of Goebbels had me wondering if Raunce’s shyness had anything to do with invasion anxiety. When Mrs. Tennant loses her ring and, after considerable misunderstandings, confesses, “It’s not the money I’m worried about, the thing had memories for me that money couldn’t buy,” I had to ask why Mrs. Tennant couldn’t cleave to the memories inside her own head. Was the wild goose chase to find the ring (along with the wild peacock chasing seen elsewhere) merely an effort to fill a void?

And what are we to make of the unusually sensuous foot massages and naked frolicking beneath the eiderdown that Kate and Edith practice in the small room they share in the attic? This is especially interesting (and not the way you’re thinking), because Edith later discovers Mrs. Jack in bed with a man who is not her husband (“two humps of body, turf over graves under those pink bedclothes”) and, shortly after this startling discovery, Edith is drawn more to Raunce. Did Edith seek out a “normal” arrangement with Raunce because she was exposed to the naked truth of a dissolute marriage? (Does this also explain why Kate devotes herself to cleaning and grooming the dim and uncouth Paddy?) I spent some time poring over what scholars had to say about Loving over the years, and I was somewhat surprised that this development had not been remarked upon all that much. Was Green somewhat ahead of the curve on lesbian relationships? Or were Kate and Edith’s topless adventures yet another “loving” galvanized by innocent efforts to get through the day?

These intriguing uncertainties are mirrored by the limitless illusions contained within the castle. We encounter “a large map of the country elaborately painted over the mantlepiece,” part of a clock that Raunce needs to rewind. Outside the castle, we discover “the complete copy of a Greek temple.” And when Raunce becomes (love)sick, he contains his neck in a scarf, with Miss Burch quipping that “he makes out the glands are enlarged.” These descriptive facades permit us to understand that the castle is a trompe-l’oeil for human connection. No hard schematic will suffice. And yet look how much we think we know when presented with such precision!

Some of Green’s grandest groomsmen don’t quite understand this point. In How Fiction Works, James Wood appraises the moment when Raunce notices Edith’s dark eyes, which catch the light “like plums dipped in cold water.” He suggests that because this “metaphor is not explicitly tied into character,” it is a successful example of a metaphor that “has been newly painted before our eyes” or “the kind of [poetic] metaphor that this particular character or community would produce.” But this snap of the key doesn’t quite undo the lock. Wood doesn’t observe that Raunce has been laughed at by his fellow footmen for the hued duality in his eyes, and that this moment of beauty, cadged during a stray moment, connotes some common eccentricity that is both within the world and shared between Raunce and Edith.

John Updike was a big fan of Henry Green, especially impressed by how “the spaces between the words are warm, and the strangeness is mysteriously exact, the strangeness of the vial.” While it’s very easy for any impassioned style geek to lap up Green’s exactitude like an eight-year-old let loose in a candy store (and let me be clear on this: I certainly did), it is important to remember that Green’s fiction is, first and foremost, about the invitational qualities of inexplicable existence. Or as Raunce himself says, “It’s human nature you’ve got to keep count of.”

Next Up: Jack London’s Call of the Wild!