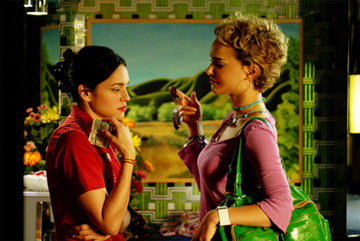 As the extreme closeups of gooey ice cream melting into viscous blueberry pie made my pre-lunch stomach grumble, I thought at first that Wong Kar-Wai’s My Blueberry Nights would turn out to be a brave and somewhat unusual art-house film for foodies. Perhaps Wong Kar-Wai would at long last inform snobs of food and snobs of life that there was indeed good eating and good living to be found in the more populist corners of the earth.

But as the film played out, the film’s major flaw presented itself to me: everything about it is too close. The characters talk in restaurants, hotel rooms, casinos, and ancillary pit stops. But their backstories are as unnaturally vacant as the streets of New York. Wong Kar-Wai and co-writer Lawrence Block seem to prefer gushing monologues — such as one delivered by Rachel Weisz while she sits on a street curb — over the minute human moments one observes quite readily in a glance at a restaurant.

For example, we see David Straithairn playing an alcoholic by night and a dutiful cop who orders chicken steaks in a diner by day, but, outside of the tall and quiet grace that Straithairn brings to his performance, we never get a true sense of his inner turmoil, save through his tab of unpaid bills bar swinging as dutifully as the traffic signals in Memphis.

A concern for peripheral objects may work well for the rudderless drifters in a Haruki Murakami novel or the precision one finds celebrated within Nicholson Baker’s work, but this film is absolutely clumsy on this point. Wong Kar-Wai seems to want a highly stylized fantasy predicated upon a vaguely gritty (and thus audience-friendly) portrayal of American bars and diners. Something he doesn’t quite seem to understand. Presumably, this is why he hired Lawrence Block. But while Block brings his pork chop chops to an entertaining Nevada hustler played by Natalie Portman, Block ain’t exactly a guy who can bring a meet cute gravitas to a relationship between Jude Law and Norah Jones, particularly when the pie-lipped propinquity is hinged upon a borderline date rape denouement. 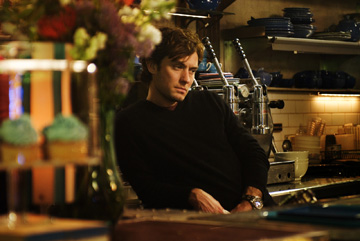 This film may be something of a gamble for Wong Kar-Wai, but the die is miscast. You simply don’t hire a hunky leading man like Jude Law to be a cafe proprietor. Not if you care about verisimilitude. Law is as flagrant as John Wayne’s Roman centurion supervising Christ’s execution in The Greatest Story Ever Told. The good people who work in the service sector remain largely anonymous, and it would have behooved Wong Kar-Wai to settle for a more interesting character actor in this part. And you don’t hire a doe-eyed cipher like Norah Jones to play a character who has no goal in life other than to work all the time and wander aimlessly around the States. Let me put it to you this way: The paint currently peeling outside my window has more personality than Norah Jones’s execrable Elizabeth, who learns nothing from being mugged on a subway or being dumped by her main man.

Law’s Jeremy has a jar in his cafe in which people deposit and pickup their keys. But Cameron Crowe was much better with this idea in Say Anything. At times, My Blueberry Nights was so humorless that I longed for John Cusack to emerge and say, “You must chill! I have hidden your keys.” Instead, we get pretentious lines like “If I throw these keys away, those doors could be closed forever.” 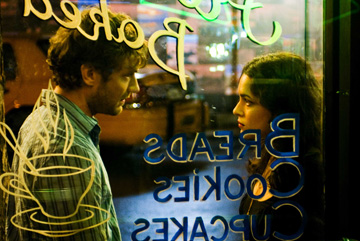 I should also observe that Darius Khondji’s cinematography is taken with doors. There are conversations in doors. A PULL sign on the door of a Memphis bar gets prominent coverage. If My Blueberry Nights doesn’t work as Food Network counterprogramming, then it will certainly excite any JELD-WEN employee who remains convinced that his hard work is a thankless job.

Of course, it isn’t all doors. Dark cars in the night are backlit by rain. There are limitless red and green neons. The film looks good, but it can’t transpose any of these intriguing symbols into the story. It’s a telling sign that moments in Elizabeth’s cross-country journey are interspersed with title cards such as DAY 57 — 1,120 MILES FROM NY. This is less a meaningful reference point and more of a Godard-like conceit.

Wong Kar-Wai is too great a fillmmaker for this. I’d hate to think that anyone unfamiliar with his work would sample this film first before Chungking Express, Happy Together, or 2046, all great films in which Wong Kar-Wai clearly found his thrill. But Blueberry, along with the remake of The Lady from Shanghai that’s purportedly in the works, suggests that Wong Kar-Wai is veering away from the distinctness that made him special. And if he isn’t careful, he may prove to be as ignored as the blueberry pie that sits uneaten in Jeremy’s cafe.