I’ve been having some difficulties with the portable locker now holding my brain. You see, I checked it in on Friday, with the hopes of reclaiming it on Tuesday — it being a three-day weekend and all. But the locker is now busted and I’m now thinking at half-mast while trying to raise hell at the incompetents who promised me a “smart and secure locker room.” 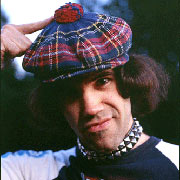 So if you have time to kill as my brain crawls across locker, I direct you to the Vancouver-based Nardwuar the Human Serviette and his interviews with assorted notables. Nardwuar is possessed of an infectious and delightfully strange enthusiasm that frequently has him referring to his guests by first and last name, and asking them bizarre questions. Consider this hilarious interview with Ron Jeremy, whereby Nardwuar insists that Mr. Jeremy smells fine and is perturbed at the various sullies (“hedgehog” and the like) directed his way. Or his interview with Franz Ferdinand, whereby Nardwuar asks, “What did you think, Alex, of your bandmate having to have some flesh taken out? Was that how hard it was in the early days of Franz Ferdinand?” Even Harlan Ellison was puzzled by Nardwuar’s boisterous malapropisms, attempting to play the humor game with Nardwuar, only to see his own lackluster jokes taken seriously by Nardwuar. What can one say when Ron Jeremy gets Nardwuar and Ellison does not?

Thankfully, Nardwuar continues his efforts on Vancouver radio. The man even talked with James Brown in 1999 and asked him what he thought of sweat, getting the following answer: “I think sweat is something that is a very emotional thing in regards to where you put it at. You might put it in different places! Sweat expresses emotion, either way, whether it is hard work, or… uh…, I wish I could get out of here, I’m tired.”