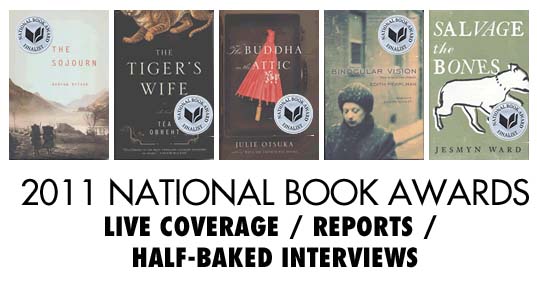 Our coverage of the 2011 National Book Awards, which will include photos, silly paragraphs, and half-baked interviews, will continue throughout the evening. Keep checking!

Reluctant Habits will be reporting from the floor of this year’s National Book Awards, which are being held on the evening of November 16th. Managing Editor Edward Champion will be offering strange observations, photographic evidence, and audio clips on this very page as they come in. He will also be tweeting various thoughts falling within the 140 character range. Please keep checking this page and the Twitter page throughout the evening.

3:28 PM: I have just shaved my head, in large part because my stubble was not long enough this year. For this, I apologize. I have donned a beard when attending previous National Book Award ceremonies. Maybe there will be National Book Award beards that I might grow in the future. The most compelling thought I have right now? Never count out any facial hair configuration. Styles change. So do temperaments.

I have printed off my press credentials. This is apparently a requirement for “entry” and I can’t help but marvel that the National Book Foundation is relying upon quaint paper technology as provenance. I’ve been informed by email that there will be numerous celebrities in attendance, including Michael Moore, John Ashbery, Yusef Komunyakaa, Nell Freudenberger, Yiyun L [sic], and John Waters. I am wondering if Yiyun, who is very friendly, a great writer, and someone who once appeared on The Bat Segundo Show, has shortened her name from Yiyun Li to Yiyun L to augment her street cred among troubled Southern California youth. This is quite a sacrifice. I mean, after the Shine/Chime mess, I find it inconceivable that someone could make a typo on a two-letter surname. I can only draw this conclusion.

Because I don’t usually wear neckties, I have been alarmed to discover that some among my modest collection have decomposed within the closet due to disuse. I have found a workaround and will be dressing up very shortly.

6:14 PM: I have arrived at the Cipriani Ballroom, feeling — after my considerable Occupy Wall Street coverage from weeks before — to be weirdly on the other side of what I usually cover. Policemen have told some of the press assembled here that the Kundera meets Umbrellas of Cherbourg vibe outside, whereby well-dressed rich people walk in straight rectilinear ways and numerous policemen stand on the sides of streets, has only been going down for a few days. Which is a hoot for anyone who has noticed the cops for the past few months. I just talked with the main man Harold Augenbraum and asked him if this was the craziest National Book Awards, security-wise, he’s ever dealt with. Not so. “One year I actually hired security,” said Augenbraum. “Someone threatened to disrupt the ceremonies. We hired security guards.” Apparently, some party objected to the specific choices that year — which may have been 2005. Of course, nobody ever did disrupt the ceremonies. And there aren’t security people that I’m aware of inside. Yet I can’t help feeling too comfortable in here — even if I’m wearing a suit, which is not something I entirely associate with comfort.

Correspondent: So here’s the question. Do you think that the Award — how much does it matter do you think? Compared to say the act of writing itself?

Pearlman: Oh! Compared to the act of writing, it doesn’t matter at all. I mean, I think writing is what matters most.

Correspondent: So why are you here then?

Pearlman: Because it matters some.

7:49 PM: My audio conversation with Mary Gabriel, nonfiction finalist of Love and Capital: Karl and Jenny Marx and the Birth of a Revolution.

8:55 PM: There’s been much talk about Occupy Wall Street at the press table (PW‘s Cal Reed says he’s gone down and will again) and among many of the attendees, but the only person who has mentioned it on stage is Ann Lauterbach. Other than Lauterbach, there hasn’t been a single person willing to address it on stage. And, as I learned in talking with nonfiction finalist Lauren Redniss (Radioactive), even some of the finalists lack the guts to air their views. “I have many thoughts, but I’d rather not comment. Thank you so much,” said Redniss at the close of the following radio interview, as she slunk into the clutches of yet more half-baked talk.