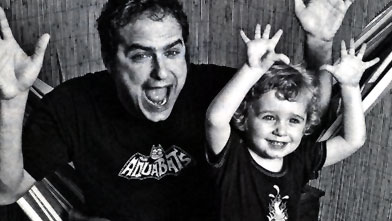 Writer Neal Pollack, who found considerable success with his book, Alternadad, has decided to write nothing other than father-related essays through the end of his natural life.

“They keep paying me for this,” said Pollack. “So why spoil a good thing?”

It was previously thought that the demand for dad essays would run out sometime last year. But like the Hubbert peak theory, nobody really knows when it will happen.

The news came as James Howard Kuntsler announced that he was beginning work on a new polemical book called The Dad Emergency, which suggests that America is spiraling into an age where dad essays will run out and America will be left helpless, looking for reading material in the suburbs.

“There will come a time when people will be shooting each other in the parking lots of malls and roasting babies over a spigot because there aren’t enough dad essays to go around,” said Kunstler. “And not even Neal Pollack will be able to fill the demand.”

At the present time, there remain enough dad essays. Although the price of dad essays seems to be going up. Some gas stations have begun installing vending machines next to pumps to take these rising costs into account.

“On some days, the dad essays sell more than gallons of gas,” said Tony Primera, the 42-year-old owner of a Shell station outside Wyoming. “I’ve been toying with the idea of shifting to a dads-and-gas style business, but I’m beholden to the forces at Shell.”

Indeed, Shell has started to commission writers to write more dad essays, believing that selling dad essays with gas will make people forget that the price of gas is going up.

“Pollack was ahead of the curve on this,” said a Shell spokesman. “But we’ll smoke him out of the supply. Conglomeration is our specialty. And I think that we have a track record to back this up.”