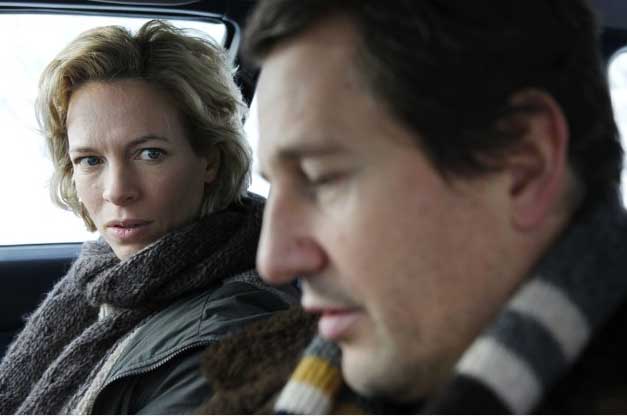 The best thing about Anne Sewitsky’s comedy is Agnes Kittelsen, whose bright eyes bounce around with so much life that you figure she’s angling to become Norway’s answer to Amy Adams.

[This is the second in a series of dispatches relating to the New Directors/New Films series, running between March 23, 2011 and April 3, 2011 at MOMA and the Film Society of Lincoln Center.]

The best thing about Anne Sewitsky’s comedy, Happy, Happy, is Agnes Kittelsen, whose bright eyes bounce around with so much life that you figure she’s angling to become Norway’s answer to Amy Adams. Kittelsen plays Kaja, a thirtysomething teacher who lives in the middle of a snowy nowhere with Eirik (Joachim Rafaelsen), a laconic man who likes to leave for a week and go hunting (“go hunting,” we learn later, is a pretense and a euphemism), and Theodor (Oskar Hernaes Brandso), their son. When Theodor meets an Ethopian child his age, he initiates a game of “Slave” with him.

Based on that description, it probably seems that Kaja and Eirik are white supremacists. And based on the fact that a happy quartet of white men pops into the film every fifteen minutes to sing famous blues standards (This reminded me, for some reason, of Alan Price’s band in O Lucky Man! Let’s have more of these happy musical intrusions in cinema.), I cannot deny that I felt that the film was embracing some bizarre yet slight shadow of white privilege. My slight discomfort, however, was assuaged by the pic’s good-natured tone, which is more committed to trying out any number of comical quirks, however messy.

There are strong indications that Eirik is a closeted gay man. He hasn’t banged his wife in a year, which makes no sense, seeing as how she’s quite happy to offer him blowjobs and she’s very happy in general – even when snobby people speak down to her. Are Theodor’s casually racist reenactments the result of closeted emotions? It’s probably worth pointing out that Eirik and Theodor enjoy staring at Kaja, without saying anything, over breakfast. They continue this dreadful staring contest, against Kaja’s protests, until Kaja flees. With men this boorish around, who needs traditional family? It isn’t much of a surprise when Kaja takes an impromptu step to break this stability.

The Ethiopian child, Noa (Ram Shihab Ebedy), doesn’t talk much and, rather strangely, isn’t terribly aware of his own heritage. (It’s especially strange because Noa appears to be very fond of books. Nevertheless, the game of “Slave” does eventually encourage Noa to examine his own closeted heritage.) Noa is the adopted son of Sigve (Henrik Rafaelsen) and a fairly chilly attorney named Elisabeth (Maibritt Saerens), who have moved into the spare house across the way. Sigve and Elisabeth have vacated from the big city because Elisabeth had an affair. The two hope to rekindle their marriage. However, as I pointed out before, Kaja is fond of blowjobs. It doesn’t take a lot of know how to predict what happens next.

What does make Sewitsky’s film very interesting for a long stretch is how behavioral collision often forces perverse exuberance to emerge in this wintry wilderness. When the two couples play Norway’s answer to Cranium, during a drawing round, Eirik attempts to illustrate AIDS by drawing an incomprehensible backdrop of planes hitting buildings and two stick figures. “Two gay guys in New York,” he explains.

I enjoyed Happy, Happy quite a lot when it embraced these uncomfortable moments, which, oddly enough, emerged quite frequently when the four main characters were playing board games. When the two couples meet to play the Couples Game (a bit like The Newlywed Game, where couples demonstrate how well they know each other through questions), Sigve and Elisabeth seem to know each other very well, while Eirik and Kaja don’t. The latter couple can’t even answer the question, “What did you first love about your partner?” But Sewitsky is skillful enough to play against this expectation later in the film. Very often, Sewitsky suggests, it’s the couples who know each other too well who end up breaking their covenant.

Unfortunately, Sewitsky is less adept in portraying the aftermath. After affairs are consummated and the truth is revealed, she’s not quite sure what to do with her characters. Having crossed the threshold of what they must do to serve the narrative, these characters are left, quite literaly, to sing to the audience – however badly. Perhaps Sewitsky is asking us to remember that euphoric residue remains after a domestic cataclysm. As a cautious optimist, that’s certainly a message I can get behind. But I don’t believe this to be entirely fair to her characters.