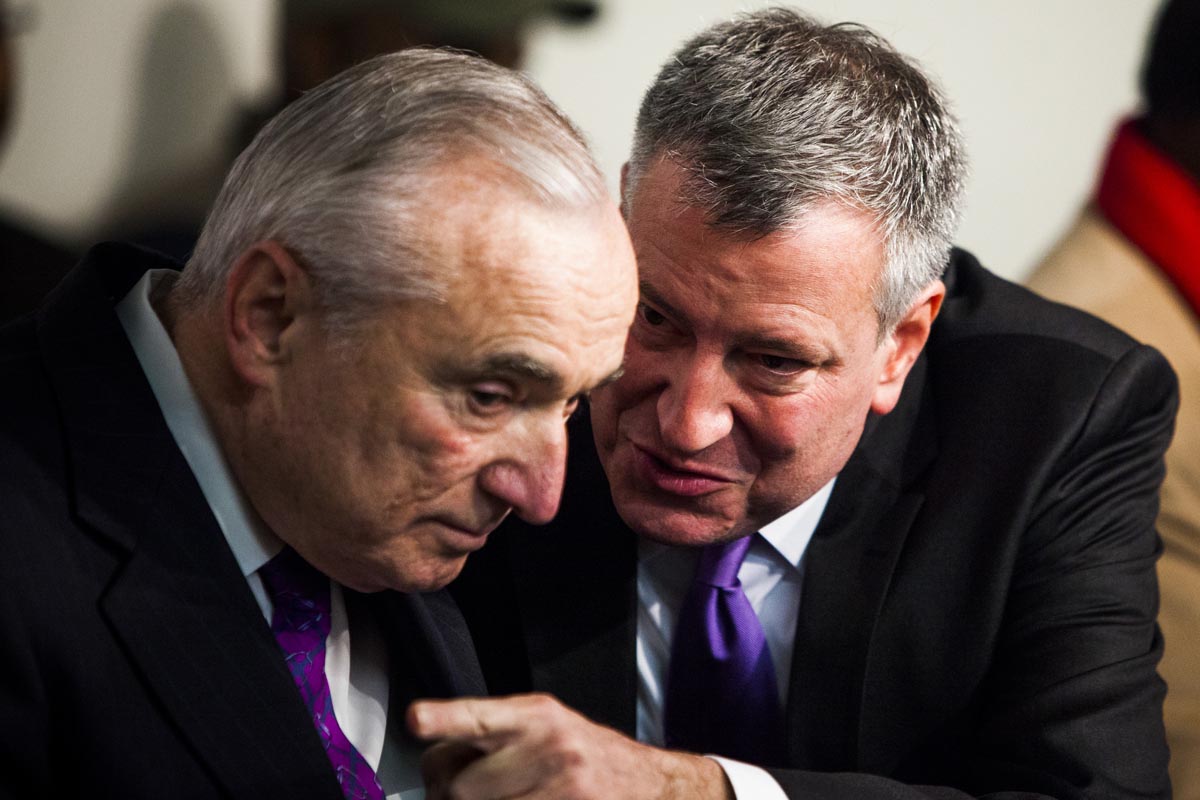 The Mayor and the Police Commissioner of New York have decided to crack down on jaywalking with excessive tickets and violence. But the programs they’re using don’t work in New York and the fatality statistics are normal. So why is New York being secretive about its data and hysterical in its language?

On Sunday, the New York Police Department put Kang Wong, an 84-year-old man, in the hospital. Wong was left bleeding in the streets. There were cuts to his face. His crime wasn’t murder or drug trafficking or robbery. It was jaywalking. 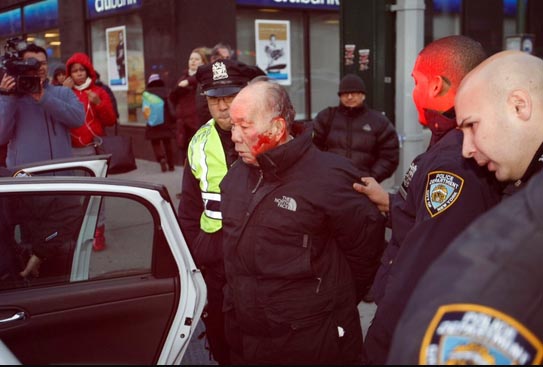 The New York Post reported that Wong, who did not speak English, was approached shortly after he had crossed the intersection of 96th Street and Broadway against a red light. Wong walked away when the cop tried writing him a ticket. The police tried pulling him back. There was a struggle. And the violence began.

The NYPD has launched a crackdown on jaywalkers at this intersection — still in effect as of Monday afternoon — in response to three fatal accidents over a week. (Details on these deaths can be read at DNAinfo.) The most prominent fatality was Samantha Lee, who was struck by a red Dodge Charger sedan on early Saturday morning.

But the jaywalking crackdown, and the violence directed towards Wong, is completely out of proportion with the crime or even the jaywalking “epidemic,” as Mayor de Blasio referred to it on Monday afternoon. As The New York Times reported last March, New York’s traffic fatality rates are less than one-third of the national average and half the rates of other big cities. 286 people died in New York City last year, up from 2012’s 274 deaths. Yet this is still a remarkably low figure. Indeed, 2013’s tally was only 30 fatalities greater than 2010, when Mayor Bloomberg and Transportation Commissioner Sadik-Khan announced that it was the best year for traffic fatalities in the City’s history. (The second-lowest figure is 269 in 2011, just 17 shy of the 2013 “epidemic.” Historically speaking, New York is doing much better than the 471 traffic fatalities in 1910.)

Yet Mayor de Blasio is determined to rid New York City of all traffic deaths by 2024. Aside from the fact that such a statistic is completely impossible unless the streets are purged of all cars, there’s an even bigger problem: the program that de Blasio is drawing from doesn’t actually work in New York.

Vision Zero — a policy idea cribbed from Sweden that de Blasio was talking up last August — wishes to put an end to all traffic fatalities. But the considerable efforts by Scandinavians to curb death have had middling and often ineffectual results. Norway adopted a Vision Zero policy in 1999, but the number of traffic fatalities remained largely unchanged since. And while Sweden has seen traffic fatalities fall as low as 266 in 2010, New York is not Sweden. Sweden isn’t nearly as dense as New York. It doesn’t have nearly as much traffic. Moreover, 65% of Sweden’s serious accidents involve wild animals. Unless New York reduces its population density (not likely) and sees a sudden influx of Swedish moose hopping around the BQE, what works for Sweden is unlikely to work in the Big Apple.

Moreover, de Blasio’s attempts to enact policy predicated upon an unworkable fantasy has established a dangerous authoritarian precedent: a tactic that the newly reappointed Police Commissioner is bringing to New York from Los Angeles that is more about sponging offenders with frivolous $250 tickets and making their lives more of a hassle.

Mayor de Blasio and New York Police Commissioner Bill Bratton are also working from illusory datasets for their new program. Bratton appeared at a press conference last Wednesday to promote Vision Zero, claiming, “Last year, pedestrian error — and I point this out — pedestrian error contributed to 73 percent of collisions.” The New York Times‘s J. David Goodman and Matt Flegenheimer — among other journalists — accepted this statistic without question, failing to follow up on where or how Bratton obtained this 73% figure. (On Monday afternoon, I spoke with Lieutenant John Grimpel in the NYPD’s public information about what data Bratton was drawing upon. Gimpel informed me that this came from an internal document from the Collisions Investigation Squad. I asked Lt. Grimpel if he would be releasing the data or the survey at a future date. “We’re not giving that out,” he said.)

On Friday, Streetsblog’s Brad Aaron did the work that other journalists couldn’t be bothered to perform, attempting to track the source of Bratton’s figure and reporting similar communications issues with the NYPD. Aaron pointed out that the 73% figure “doesn’t match up with any known dataset or the robust recent research into the causes of serious pedestrian issues.”

In other words, de Blasio and Bratton are using Scandinavian ideology that doesn’t work and basing their policy on statistics that they refuse to be transparent about and that look to be illusory.

When questioned by reporters on Monday about the crackdown, de Blasio stated that while there was no citywide crackdown, precinct commanders could act upon the issue. De Blasio also referred to pedestrian fatalities as “an epidemic we’re facing,” but refused to address the Wong case “until I have a better sense of it.” But if the Mayor cannot provide adequate data and transparent justification which explains why his jaywalking crackdown is a sane corrective, then he and his Police Commissioner are no better than other thugs who have persecuted the hoi polloi in the name of mass hysteria that they lacked the acumen to respond to.

As Philip Alcabes has pointed out in his thoughtful book, Dread: How Fear and Fantasy Have Fueled Epidemics from the Black Death to Avian Flu

When officials or entrepreneurs make use of an epidemic threat to create politically or financially useful lessons, they follow a long tradition. Medieval Christians burned Jews in hopes of warding off epidemics of plague; outbreaks of cholera in the mid-nineteenth century in England and America; early-twentieth century epidemics of plague in San Francisco were said to be caused by immigrants (Chinese and Mexican, respectively); and venereal disease epidemics have been attributed historically to “loose women.”

During his inauguration speech, de Blasio held up Fiorello La Guardia as “the man I consider to be the greatest Mayor this city has ever known,” citing La Guardia’s belief in the rugged individual. But his new policies against jaywalking are not only a shocking throwback to draconian police measures enacted by Mayor Giuliaini. These measures stand against La Guardia’s populist principles. (They are also a waste of police resources. When Mayor Rudolph Giuliani criminalized jaywalking in the late 1990s, pushing up the fine from $2 to $50, police rightly balked at having to waste their time. How many more manhours will be wasted because of de Blasio and Bratton’s ridiculous war?)

According to H. Paul Jeffers’s The Napoleon of New York, Mayor La Guardia stood adamantly against criminalizing jaywalking. In 1936, as the Nazi conflict escalated in Germany, La Guardia vetoed a bill passed by the aldermen that required police to arrest people for jaywalking. “I prefer the happiness of our unorganized imperfection to the organized perfection of other countries,” said La Guardia. “Broadway is not Unter den Linden.”

But maybe under de Blasio and Bratton, it is.