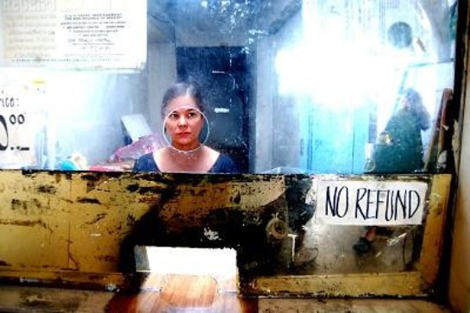 [This is the seventh part in an open series of reports from the New York Film Festival.]

“I’m a certified nurse,” says the stern Nayda, “What the hell am I doing here?” I likewise hoped for an answer to that question, particularly since we see later on the wall that Nayda has actually earned a Bachelor of Science. Which would suggest that she’s a bit more than just a certified nurse.

The Pinedas are a dysfunctional family operating the Family Theater, a movie house (the last of three apparently; the other two have closed down) dedicated to such offerings as Seedling and Frolic in the Water. Every week, there’s a new set of reels delivered with a new movie. But the man delivering the goods doesn’t offer any small talk. He simply says, “See you next week.” The Family matriarch, Nanay, is busy in court, suing her husband for bigamy and the folks who work this movie house, adorned with posters and paintings of half-dressed women, await text messages on the verdict. A smart kid named Jonas (who is also bespectacled, living up to the nerdy cliche) runs around, playing Minesweeper on his computer and dazzling various family members with his apparent math wizardry. You’d think the kid’s math skills would come in handy for counting change, but one episode demonstrates that the Pinedas are easily duped. Then there’s Alan, who has a boil the size of a nipple on his ass. Subtlety, as we can see, is not a strong suit for screenwriter Armando Lao and Mendoza.

This is all shot in a Dogme 95 style, with the sounds of the street blaring over key pieces of dialogue and what little emotion we’re permitted to espy, along with shaky handheld camera work that now seems something of a visual relic here in the 21st century.

But any movie featuring a slightly surreal moment with a goat running around a theater’s filthy floors and nuns falling down in the street can’t be all bad, can it? I latched onto these two images because I found myself desperate for some larger framework, some visceral inroads that would help me to parse the poverty beyond the film’s simplistic dichotomy (sex workers and family members) occupying the same premises. I was struck by one moment in which a mother holding a small child asks Nayda if her son, who is sixteen, might be inside. Nayda insists that the theater doesn’t let minors in and brushes her away. But it is quite evident that underage sex workers are getting some pocket money on the inside. Nobody cares to observe.

Lao and Mendoza, however, don’t offer us any complex motivations that might make us more fascinated by this tragedy. There’s one interesting moment in which a prostitute is teaching another aspiring streetwalker how to walk down stairs to attract johns. And the handover of this very basic body language is somewhat stunning to take in, particularly as other sex workers surround these two figures without a trace of empathy. It’s just a simple business transaction.

But like most failed artistic efforts to find the real, this film presented more disinterest than interest. The problem boils down, so to speak, to one simple maxim: If there isn’t a narrative, atmosphere ain’t enough, no matter how noble the intentions.