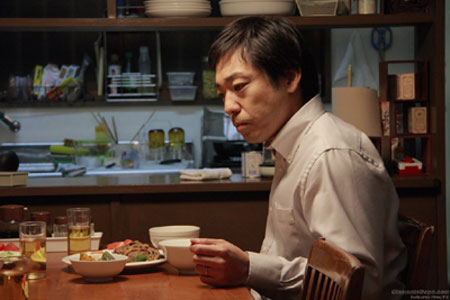 [This is the fourth part in an open series of reports from the New York Film Festival. For related material, you can read my interview with screenwriter Max Mannix or listen to a podcast interview with director Kiyoshi Kurosawa.]

Kiyoshi Kurosawa’s Tokyo Sonata sees the Japanese horror director shifting gears to a more internal terror: the tendency of passive-aggressive men to prevaricate, pretend, and otherwise put on an act as they lose their jobs, watch their sons shipped off to Iraq, and capitulate to a wretched consumerism that promises to be their future job security. Kurosawa’s conceit (cooked up in collaboration with Australian writer Max Mannix) is that nearly every individual is as disposable as the newspaper blown into a home that we see in the film’s opening shot.

Numata Sasaki (Teruyuki Kagawa) is an administrator who is downsized. He does not tell his wife. As far as he’s concerned, if he just hands over the money every month and spend the working hours out of the house, she’ll never know. As he attempts to find work, he cannot tell anyone what his job skills are and, in one terrible scene, he mumbles something about being a good karaoke singer and is humiliated before a middle-manager half his age, asked to use a pen as a microphone. He meets up with a high school buddy, another out of work man who is likewise all dressed up with no place to go who is now reduced to wandering around with a cell phone that automatically goes off five times every hour, pretending that he’s about to close a deal or attend a meeting. “I do it to calm my nerves,” he says.

What makes Tokyo Sonata‘s first deadpan hour, in particular, work so well is how Kurosawa depicts this madness like a grand Ozu parody. He regularly crosses the 180 line with his cutting, adopting Ozu’s 360 degree rule. He even has a subway line running right behind the Sasaki home, evoking Ozu’s trains, as if to suggest that this is the kind of warped film Ozu would make if he had had the misfortune to be born four decades later.

Kurosawa frequently has his side characters hiding their private moments, such as a piano teacher who takes a call concerning her divorce, but who hides halfway behind a wall. We don’t see the phone, even though we clearly hear her terrible reality. Kurosawa also takes great advantage of the organization men walking in precise lines to their jobs, their trains, and their lives as a whole. This is a world in which a teacher can be easily accused of reading porn manga by a kid and the teacher won’t be fazed by the accusation. “I’m an adult,” says the teacher of the accusation, “so it hardly bothers me.” But this “responsible” adult is quick to accuse the kid of owning a graphic novel that he had the misfortune of passing in class. In the end, the inauthentic nature of these charges puts an end to his authority.

Numata’s younger son wishes to pursue piano. But with his father putting his authoritative foot down, the son is forced to steal his monthly lunch allotment and dig through the trash for a keyboard he can approximate his finger dancing on. Never mind that he might very well be a musical prodigy.

Numata’s older son, just about an adult, spends his time handing out flyers. But he’s eager to do something meaningful. And with the United States looking for fresh military recruits, there’s always the armed forces to fall back on. As to Numata’s wife, despite possessing a few more smarts than the men in her family, her role is merely a homemaker who has obtained a driver’s license.

These existential dilemmas unfold at a snail’s pace. But the slowness permits one to get the lay of the land, to see this terrible terrain common to all developed nations with a fresh eye. Unfortunately, Kurosawa and Mannix don’t quite trust this premise and a jarring moment of violence kickstarts an array of dei ex machinis, threatening to completely undo the film. But this unwise drift into needless coincidences and Godard-like shenanigans that don’t really suit Kurosawa’s talents so well is redeemed by a moment near the end in which people are forced to stare deep into the heart of beauty. Kurosawa’s terrible conclusion is that one routine simply replaces another. Reality has become a terrain in which shell-shocked awe has overcome effusiveness. Even when some turn to crime, it is only because they aren’t capable of doing anything else, and, even here, the efforts are bungled badly.

So Kurosawa’s sonata, lacking the vocals of a proper cantata, dares to show us our own voiceless world. Without our identities, we’re reduced to pretending that things will work out, bandying about in service sector jobs, and ignoring the heartfelt passions that can be readily observed in others. This film is a damning indictment of humanity’s position in the present age, and it didn’t sit too well with some of the pretentious types I heard bitching and moaning in the back of the screening room about how slow the film was. In an age in which we’re become accustomed to easily digestible (and easily forgettable) entertainments and MTV cutting, Tokyo Sonata is a film which demands us to slow down and look at what we’ve become. It doesn’t present any solutions. But then answering the question of how we get out of this mess is not the filmmaker’s job. It’s the work of those who speak up and dare to live.