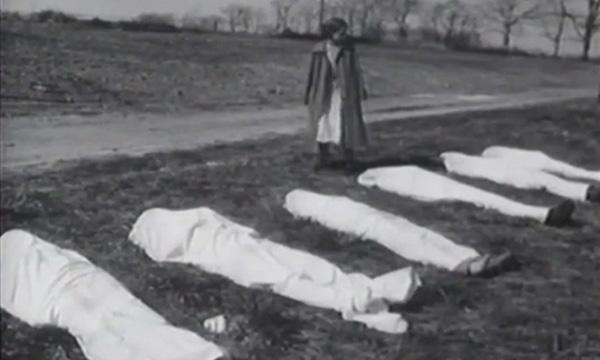 This spellbinding 1981 adaptation of a Paul Bowles story was nearly lost, but is now playing as part of the New York Film Festival.

[This is the fifth in a series of dispatches relating to the 2011 New York Film Festival. All of Reluctant Habits’s NYFF posts can be located here.]

In a 1965 interview with Ira Cohen, Bowles revealed that his short story “You Are Not I” came from a dream state: “a second between waking and sleeping, or sleeping and waking.” Sara Driver’s You Are Not I is a spellbinding example of how a scrappy filmmaker can transform words into something that is different from the source yet equally distinct. Unlike Julia Loktev’s weak attempt to play coy (and ultimately hollow and obvious) with Tom Bissell, Driver fully engages with the dream and makes it her own. A commonplace Jesus portrait hanging above a chair isn’t so much a kitsch signifier as it is a marker of one possible faith that might fill in the traumatic gaps. The “She’s dead” uttered within Bowles’s story becomes a hypnotic mantra. The indelible imagery of stones being dropped into the open mouths of the dead transmutes into a surreal effort to express grief.

There are several pleasant and unexpected ties to a Lower East Side culture from decades before. Jim Jarmusch serves as co-writer and cinematographer. Luc Sante, wearing watch cap and glasses, acts as a man who drives the car. Phil Kline offers a synth-sculpted soundtrack. There’s Tom DiCillo on assistant camera. And given the film’s commitment to slow trancelike walking (understandable, given the main character’s recent escape from a mental hospital and her confrontation with the dead), one gets the sense that the young Driver (and Jarmusch) was feeding on a steady diet of German Expressionism. I was quite fond of the especially still manner in which Fletcher sits in a chair, speculating on what others might be saying about her, and the long and lumbering manner in which the actors walk across the room. Because of these qualities, the film, in Driver’s hands, feels more like something from Jane Bowles rather than Paul. When the young woman enters the house (one of those boxy, square-screened hulks in New Jersey), she claims that the layout has been switched around and that this construction must have been committed at great expense. That we have not seen the “original” house is quite helpful. Because we’re then left second-guessing whether what we are seeing is real. I must confess that I found myself suspicious of the cigarette smoke pervading the living room near film’s end for arty effect.

Equally interesting is the way that this 48 minute black-and-white film was rescued from the dead. Driver had unknowingly shipped a print of her film to Bowles in Tangier. The negative was destroyed, courtesy of a leak in a New Jersey warehouse. And as Driver’s remaining digital copy was eaten away by the ravages of degradable tape, with the signal reduced to nothing, Driver had concluded that the film was dead. Until librarian Francis Poole traveled to Tangier to collect Bowles’s papers for the University of Delaware, not knowing that the film he carried in his hands was indeed an adaptation of Bowles’s story. Poole got in touch with Driver. And the film is now thankfully enjoying a second life at the New York Film Festival. (A more elaborate version of this story can be heard on the press conference audio below, which includes both Driver and Poole discussing the film.)