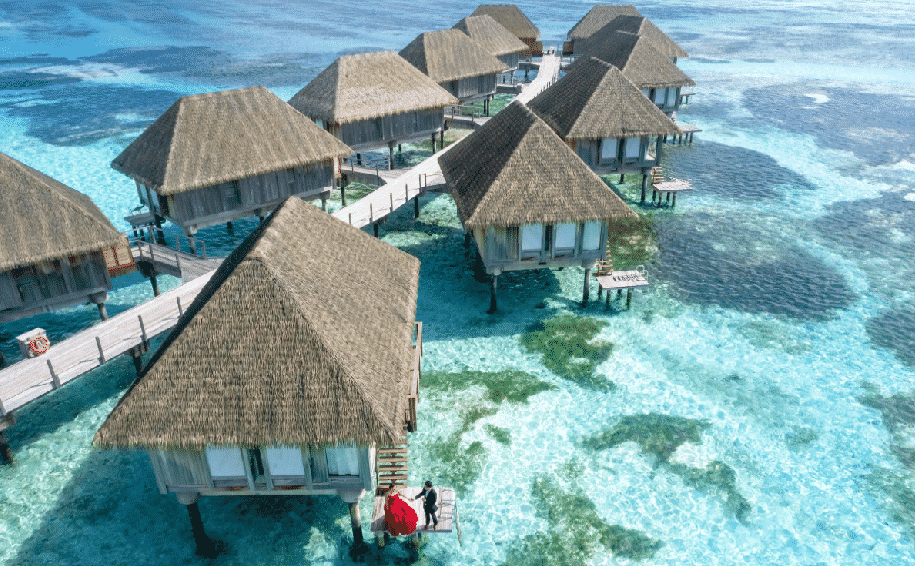 In the twenty-first chapter of this wild NaNoWriMo experiment, a former accomplice of Bill Flogaast’s is interrupted from his afternoon delight by an urgent call concerning the Van Kleason affair.

[AUTHOR’S NOTE: This is the last new chapter I will offer until Sunday, as I am quite exhausted from writing 43,000 words in three weeks while working a full-time job and living a jam-packed life. I also have a great deal of Thanksgiving cooking to do. Many thanks to all of the kind emails and messages. I’ve been stunned and deeply honored by the positive reception to this insane endeavor, which I wrote in a bubble, without any plan, and simply to have fun. Happy Thanksgiving to all!]

Nick Carraway (real name: ________________) was lying in bed with an obscene number of pillows, wearing nothing more than a robe he had purloined from the Cheval Blanc St-Tropez during his six month stay in the French Riviera. He sipped a tamarind mojito with measured leisure as the gentle water roared outside and the two women wrapped their arms around his neck, purring sweet Spanish into his ears that he could only half-comprehend but that had an infallible restorative effect on what little remained of his soul. One of the women had tied one of his burgundy ties around her neck and was wearing nothing else. The other dangled the brim of his fedora around her tousled brown bangs and laughed, thinking of the vast fortune she was making that morning, and she also wasn’t wearing anything else. He’d purchased this modest but cozy Puerto Plata bungalow — which was situated next to a large manse owned by an obscenely rich medical instrument titan fond of throwing obscenely opulent parties — through the shell company he’d set up four years before: the paperwork thoroughly vetted and steamed by the legal cleaners in Chicago. And while he had once possessed a formidable work ethic that still bubbled up from time to time when he worked on his garden, he was enjoying this new life. When you didn’t spend a large chunk of your week burying bodies, you tended to be a tad more relaxed.

That’s when the phone rang.

He picked up the phone, the old habit not quite capable of dying.

And he was planning to do just that. Only a few of his old contacts knew this number.

But the name on the phone was Bill Flogaast. Shit.

Burgundy climbed his neck and planted several rapturous kisses upon his nape.

“I do understand. I’m retired. Find somebody else.”

Fedora scolded Nick with her wagging finger. “No teléfono! No, no, no!”

“That’s my business. Not yours. Goodbye.”

And just as Nick was about to hang up and engage in round four with the two ladies, Flogaast said four words that swiftly altered his priorities.

His lust quickly left him.

“Is this a secure line?” he asked.

“Your name flashed on my phone. So clearly it isn’t. Call me back at the right number in five minutes.”

He clutched the phone like Gollum refusing to capitulate the ring. He’d have to wipe it again. Contacts, texts, the lot. Just in case. And he liked this model. Bill Fucking Flogaast. Not as slick as he believed himself to be.

Nick darted out of bed, all business. He grabbed the pastel billfold of pesos and doled out a liberal sum to each of the two women.

“Nick,” hummed fedora. She put her scolding finger into her succulent mouth and lightly pulled it in and out to convey to Nick just what he was giving up, her beautiful almond eyes never leaving Nick’s gaze. Then burgundy grabbed fedora’s delicate hands in hers and the two started making out, moving closer, their palms flattening against the contours of their backs and tracing shoulders and curves, enjoying the spectacle of being watched, the thrill of trying to persuade this gringo to give them more money.

Dominican women. Worse than Portuguese women. At times like this, he resented having self-control.

He gave them more money.

“We can pick this up later. Ir ahora.”

Burgundy pouted. But fedora collected their thongs, their microscopic skirts, and their halter tops.

He walked into the study and shut the door. He sat down on the vintage swivel chair next to the old rolltop desk. He opened his laptop and activated the surveillance cameras (there were twenty-four of them in the bungalow), watching the two women get dressed and collect their things. You couldn’t be too careful. Then he heard the ancient chime of one of his no-frills Nokias. He slid open the drawer containing the twenty-three burner phones before seeing the word “Private” glisten on one of these in an early noughties typeface. Another look at the cameras. The two women walked out the front door, laughing and counting their pesos. Reasonably secure.

He answered the phone.

“Yeah,” he said again. “Yeah” was the way he answered all calls. He had honed his “Yeah” over time to make it as gruff and as peremptory as possible. You wanted a “Yeah” that could scare the living bejesus out of some cold caller misdialing from the Third World or cause some anxious stranger to take up therapy again.

“The Big Guy. He’s been dead for five years. I thought we cleaned everything up.”

“We didn’t. Two journalists were nosing around.”

“A loser by the name of Herbert Budruck.”

“How did you take care of him?”

“Well, what was I supposed to do?”

“You should have called me first.”

“And let me guess. He screwed it up.”

“Yes. He called the vacuum guys per the protocol.”

Nick heard the telltale sound of a car passing in the background.

“Are you driving right now?”

“A sitting Senator, as it so happens. He’s also involved in this.”

“Bill, how many times have I told you? Low profile. No politicians.”

He recalled the botched job in Kansas City. The dossier hadn’t said anything about the target being a mayoral candidate. And that guy ended up surviving the attack, becoming a socialist hero, and winning the election. He’d been forced to lie low for two years before resurfacing. That had cost him a considerable sum of money and he spent the time in Italy learning how to make pasta from scratch. The Kansas City contretemps hadn’t impacted his reputation. Everybody knew that Nick was a consummate pro and there was always some Factor X outside of your control.

“You said there two journalists,” said Nick. “Who’s the other? I presume this one’s still alive?”

“You haven’t been paying attention to the news, have you?”

“Her name is Ali Breslin. I tried to stop her! Really, I did. And not everything came out.”

“Yeah. Stroller had to flee to Groningen.”

Nick had always been suspicious of Stroller. Of course, he’d seen far worse over the years. Humans were capable of anything, especially when they were entangled with the criminal element. But you learned not to judge people for being monstrous. The money certainly helped to keep the unspeakable out of sight and out of mind. But the trafficking ring, connected to so many prominent people, was a bad idea. Bill had been immune to his logic, reminding him that Stroller had offered many of his authors a deal they couldn’t refuse and that he knew the right people. But knowing the right people didn’t excuse incompetence. He’d seen so many who “knew the right people” disappear. In the regular world, you were called into some human resources office and given a severance package. And maybe you’d cry and complain to your wife. But in the underworld, you didn’t have that middle-class luxury. If you bungled a job, there was a good chance you’d get a bullet to the head.

Goddammit, the mess was even bigger than he could have imagined.

“Bill, you assured me that people don’t read anymore.”

“So I hope you can understand why I called you.”

There was a gulp on the other end.

“But this isn’t over. You’re still involved!”

“Why did you leave the business, Nick? You were so good.”

“Give me two minutes.”

He placed the burner phone into the cradle next to his laptop and an enormous WAV file, an audio display of this connection, popped up on the screen. The software scraped the frequency. No taps. Nothing untoward in the peaks. Not a single tone revealing that somebody else was listening in.

“You’d be surprised. Henry’s finishing up four years for vehicular assault. He should have killed Sophie, but he didn’t. And he hates himself for that. Really hates himself. It was an affront to his work ethic. And he’s loyal, Bill. Very loyal. One of the best men I ever had under my wing. Never talked. Even when the Feds tried to sweeten the pot with an immunity deal and get him in a witness relocation program if he named names. But he didn’t.

“He knew the risks.”

“I know something about that. My wife left me last year.”

“I’m not sure you do. You never killed anyone.”

There was a pause. A pause he often heard from the squeaky clean with one toe in the sordid pool.

“Are you still there?”

“Okay. Bill, you have the privilege of being yourself. Sure, you have to keep track of the lies that you tell your authors, the media people, your coworkers, and all that. And you’re probably thinking to yourself, ‘Fuck me. This is stressful.’ And I don’t want to gainsay your stress. I’m sure it’s something you unload to a shrink. But you’re small time, Bill. Just small time.”

“Bill, I’m not finished. You’re a publicist, one of the smartest publicists in the publishing industry, and you haven’t learned how to shut up when someone is trying to unload a bit of wisdom.”

“Imagine a set of lies that becomes a second identity. Or even a third identity. That’s a little trickier. That’s not something that everyone can do. That’s what separates the soft men from the hard men. That’s what distinguishes the professional from the amateur. And let me assure you, Bill, that I am a fucking professional. That’s why you called me, right?”

“Because you couldn’t find someone else.”

“You’re the only man who can do this.”

“Because, you needlessly persistent son of a bitch, I’m retired. Capisce?”

“So when I hear you beg me to clean up your mess — and I honestly don’t give a flying fuck about how bad it is because, as I’ve told you, I’m retired and I know this game better than you do — I hear a man who isn’t much of a man at all. I hear a man who probably made a big mistake and left his career far too soon. I hear a man who is riding on his laurels. Who lives in the past. There’s a reason I go by Nick Carraway. It is quite straightforward. You can’t relive the past, old sport.”

“Understood. I won’t bother you again.”

“If you call me again, I’ll make sure that you sink to the bottom of the Hudson River, chained to a concrete block, wondering in your final moments why everything went so wrong.”

“And one last thing. Don’t call the guys at Coca-Cola. I worked with them to humor you. I did make some concessions with all my clients. But they’re not professional and they lack discipline. And they’re not going to help you out of this.”

“Who should I call then?”

“Oh, you’re a big boy. I’m sure you’ll figure something out. Now if you’ll excuse me, I have to go on my afternoon swim.”

“It was a pleasure doing business with you, Bill.”

Nick hung up. Then he looked out the window and wondered if he could retrieve his fedora and burgundy tie in the next fifteen minutes.