She couldn’t be more than four. She had bouncy black braids and lithe limbs, and her hand was clutching a red Virgin Megastore bag. The bag contained CDs, all packed taut, forming a modular brick.

When the police motorcycles roared down Market Street, the little girl’s ears pricked up. When the protestors followed the cops, a few stray “pigs” loosened into the angry din, her tiny brown eyes widened. She began jumping up and down as they came, stirred by the excitement. No war! Get out! When do we want it? Now! Her limbs flailed. And that’s when the girl’s bag bashed against my thigh. A day later, there’s still a purplish welt that stings.

The girl’s mother hadn’t noticed. She watched the parade from the sidewalk, mesmerized, smoking a cigarette under a MUNI bus shelter. 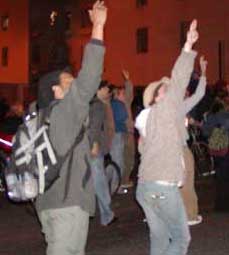 The girl herself didn’t see that she had hit me with her bag. The protest’s hypnotic power inured her from awareness. And it’s doubtful that she had an idea about the politics or what this was all about. She ran down the street. I wondered whether mom was setting herself up for a milk carton nightmare. When the girl returned to the bus shelter, I moved on.

I had come downtown to run errands. I hadn’t known there’d be a protest. There are protests in San Francisco every other week now, it seems. Par for the course. But none of them have done a damn thing. The protesters did shut down the City on March 20, 2003. Windows were bashed. Drivers were heckled. A thousand or so were arrested. And the whole contretemps cast a gloomy fog over antiwar momentum, which had started off with peaceful gatherings that involved students and families.

The protests continue. But there are still troops in Iraq. There is still questionable accountability in Washington. There are still privacy-invasive initiatives legislated on Capitol Hill. The protests, it seems, have done little good.

It’s not because the protesters are without common sense. During that March evening, as police congregated en masse around the Civic Center, I followed and photographed a splinter group that was wandering around SOMA. The spontaneous leaders of this group, to their immense credit, made efforts to calm people down, getting them to focus. They encouraged the protesters to promote awareness, rather than busting shit up. But when you have a few bad apples acting of their accord, terrible things happen. 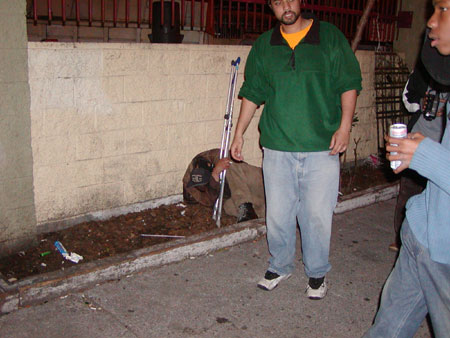 I took this picture near the end of that night. The man cowering behind his crutches was homeless. He was asked by the group to join them in their impromptu walk. He declined. And because he declined, the young man in the green jersey, high on mob mentality, kicked him in the gut repeatedly. He stopped just before the homeless man clutched his threadbare blanket and curled his gaunt frame into a protective fetal position.

This incident horrified me. As I look at that photo, I still hear the man’s painful squeals and the sudden silence that followed. I was so stunned that I don’t even remember taking the picture. It set me off politics and protests almost completely.

Protests aren’t without benefit. But it could be argued that they have lost their purpose. Where previous generations sat down at lunch counters or used public gatherings to stir up revolution in India or end the war in Vietnam, the current set is only too happy to organize without thought. Testosterone and impulse has replaced education or even a basic grasp of social know-how. The young cull their arguments from Michael Moore’s latest book, but maintain facile opinions and Manichean conceptions of existence. Their actions, much like their thoughts, are ill-formed. Little heed is paid to finding out where the opposition stands, or what motivates their thinking. It has become a tableau of metaphors and lunatic analogies, rather than facts and cause. The status quo is demonized in the same way the Russians were demonized during the Cold War. Republicans are evil brutes. Bush is Hitler. And if you don’t understand, dammit, you’re a goddam sellout.

“What does your play have to do with the current situation?” she said.

I told her it was a business satire. It was farcical with slapstick and bad puns. But ultimately, it was about human behavior.

“Oh,” she said with a contemptuous huff. And she turned away. She was the one to ask the question, but to her mind, it was apolitical. Whatever floats your boat.

There is a man in front of City Hall right now on a hunger strike. Are the protesters aware of him? Could any of them make that kind of sacrifice?

I walked against the syncopated beat. Deliberately. It wasn’t because I was inconvenienced or that I didn’t, in part, share the protesters’ politics. But I was bothered by the crude logic. An undergrad agitator handed me a flyer, trying to convince me that I was responsible for Iraq because I paid my taxes. I responded to this young ruffian by asking him what then I should do.

“Well then I’ll go to jail. And what’s the point of that? There are enough taxpayers in this country to keep the Department of Defense running well to the end of the century.”

Not long ago, a LaRouche supporter told me that I needed a blow job when I disregarded his mad vitriol.

There was once a time when I participated in rallies. The Contract with America. The various Gulf Wars. In 2000, I had even canvassed for Nader. But I began to recognize cliches. There’d always be militant Wobblies. There’d always be people who couldn’t find the Persian Gulf on a map. Apparently, it was impossible to adopt a neutral stance on Israel. You were either for Palestine or against us. Likewise, with this kid, you were either for not paying your taxes or against us.

In all of these gatherings, I found myself drifting away from the throng and listening to regular people who watched the proceedings, all wondering what the fuss was about. It never occurred for any of these militant-minded folks to do this. And when they did, it involved talk and bluster, the same unilateralism they decried.

Little wonder that current political protest is so disregarded.