Like my colleague Jessa Crispin, I must confess that I too receive more packages than I can possibly manage. Yesterday, I received 312 packages alone. It was the fall publishing season. One third of these had been sent by a man named Lenny with a return address that matched Random House’s. I have never known a man named Lenny. I have no idea who he might be, but it is of great comfort to know that some random guy named Lenny thinks highly enough of me to send packages.

On Tuesday, the UPS man came by every three minutes with another package of books. I slipped him a $50 bill to see if he could deliver all of the packages at the same time. He came back three minutes later and acted as if nothing happened. I suppose it can’t be easy being a UPS man. I don’t blame him for taking my money.

I was convinced that it was too late for the UPS to deliver any further shipments, and I begin arranging the books in three piles. And then I arranged them in four. I thought to myself, Why stop there?, and soon there were five piles of books. I can’t remember the original taxonomy, but I know it had something to do with the covers. Before I knew it, there were eventually twenty-six piles of books: one for each letter of the alphabet. 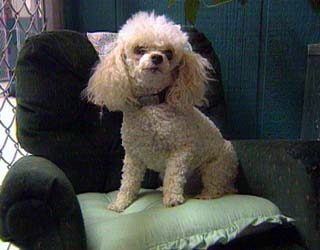 You’d be surprised by the number of books published which begin with the letter Z. I became very interested in one book called Zany Ways to Spice Up Your Poodle’s Sex Life. It had stunning prose. I had no idea such an audience demographic existed, but after staring at several of the expensive colorful inserts, I contemplated rescuing two poodles from the animal shelter, employing some of the author’s helpful suggestions, and seeing if I could get a cheap thrill watching two poodles copulating. The book would help me stay amused. This is what books often do. But I was too lazy to go down to the animal shelter and I remembered a childhood incident in which a poodle had barked at me during an emotionally vulnerable moment. So I called my girlfriend and asked if she felt like barking and doing other things that the book had suggested. She declined and decided to break up with me.

I didn’t like being sad. So I called up John Freeman and asked him if he was interested in “having a good time.” Freeman told me that he “didn’t have good times with bloggers” and informed me that he wouldn’t discuss anything with me until I was “a professional.” I was unsure about what he meant. I had only hoped for fun and a little companionship.

Suddenly, one of the vertiginous book piles collapsed. And my left leg would not move. The books had paralyzed me and they would not budge, despite my repeated flails. I was forced to set fire to this pile. I suffered third-degree burns, but at least I could move my leg.

Unfortunately, the fire spread throughout my apartment. The books served as kindling. And pretty soon, I was pretty certain that I was breathing in some form of asbestos.

The next day, more books arrived. And I used these to fill in various holes in the wall. And I thanked the publishers for sending me a rather creative form of drywall. Then again, I wondered if it was the publishers had caused all the problems in the first place.

But I’m thankful to the publishers for making my life a little more interesting.

Would I take cash to review one of these books favorably? Oh no! I may be a pervert, but I’m not a whore.