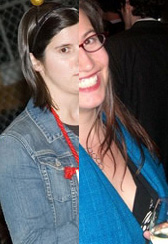 This Sunday, Rachel Donadio continued her regrettable declivity into the morass of embarrassing personal essays — the kind of writing once penned by Curtis Sittenfeld, before Sittenfeld wised up and stopped writing for the New York Times Book Review for good.

But this has not prevented literary experts from asking why Donadio, who is in her mid-thirties and really should know better, would bang out such remarkably judgmental tripe. (Sittenfeld was 31 when she wrote her essays.)

There is a sad but certain answer. Hard-pressed to answer this question, this hastily formed literary committee decided to take some initiative. They knocked on the door of Ms. Donadio’s apartment and discovered a woman — half-Sittenfeld, half-Donadio — who expressed a half-hearted desire to move to downtown Philadelphia. This committee reports that Curthel Sittenadio was looking around for two partially completed manuscripts: one named Ep, the other named The Man Of. The hope was to put these two books together and finally break out of the New York Times doldrums with a published novel that would sell.

But what happened was a merging of personalities that may prove to be inexorable. Scientists have been commissioned to bring the old Rachel Donadio back — the one who once worked at the New York Observer and who was, every so often, fun. But the physical and writing transmogrification may be permanent.