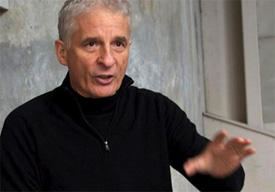 At a press conference attended by only three reporters*, Daniel Menaker announced that he is now slated to star in a new motion picture: The Karate Kid V: Titlepage. This represents the next step in what Menaker calls “the Titlepage evolution.”

“With Pat Morita dead, they’ve been trying to find an excuse to revive the franchise,” said Menaker. “I pitched them on a book-themed martial arts picture, and they went for it!”

Studio executives were taken with Menaker’s consistently black apparel. Menaker informed the executives that he had picked this idea up from Steven Seagal. Menaker took meetings. Contracts were then signed.

Menaker will play a new sensei — “an old war buddy of Mr. Miyagi’s” — who opens a dojo in Reseda and instructs teenagers to sit in uncomfortable chairs while cameras rapidly capture their bored expressions, while only one person at a time talks about books. Those who cannot fall in line with this stern routine will be given the crane kick.

Martin Kove will reprise his role as Kreese, who will take revenge on “all friends of Miyagi” and, in particular, any awkward television he has to endure just before fighting. John G. Avildsen, who expressed problems with the script, has reportedly demanded a minimum of $3.2 million to direct this film.

* — Once again, demonstrating that the newspaper book review crisis has been lost.