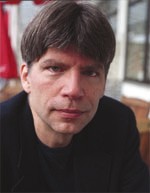 National Book Award-winning writer Richard Powers has been revealed as a ghost writer of books “authored” by Tom Clancy and James Patterson.

“I’m not proud of what I did, but we needed a new porch,” said Powers in a rare interview. “Ever wonder why Dave Wallace picked The Hunt for Red October as one of his top ten books? Well, now you have your answer.”

Powers’ ghost writing career started off quietly under Tom Clancy. Word got around. Powers confessed that he had been approached by James Patterson, because Patterson was writing so many books that he had exhausted his rolodex of contacts.

“It was easy money,” said Powers. “I could put these books together over a weekend, because there wasn’t any neuroscience or VR environments involved. Just bad writing. In fact, writing bad sentences was the hardest part of the job.”