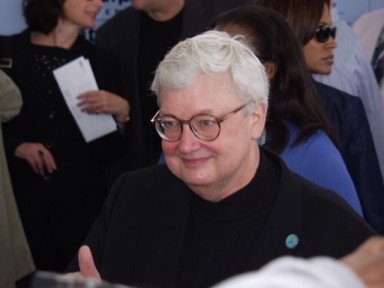 They stood in aisles bordered by bookshelves. They squeezed into pint-sized crannies. They craned their necks and looked at their watches, wondering when The Big E would arrive. At least 250 devotees packed the second floor of Stacey’s to catch a glimpse of America’s most famous critic. He was there to hawk his new book, The Great Movies II.

The big boys in charge had billed this as an “event.” The man was clearly mobbed. A quiet awe settled over the throng upon Ebert’s quiet ascension to the podium. Stacey’s management gave the obligatory intro, and Ebert, with his trademark cherubic grin settled upon his face, took in the demographic of mostly thirtysomethings sacrificing their lunch hour. Ebert, having awoken from a recent nap, began speaking in a grandfatherly voice. My general impression was that, despite his recent stroke, he was very articulate, although every time he tried to reference a movie, he kept coming back to The Grapes of Wrath. He was also a great racountuer and did a very good Lee Marvin impression.

Ebert’s idea of a “great movie” came from the Guardian critic Derek Malcolm. He noted that he had considerable problems with including Birth of a Nation in the first volume. But he was determined to follow through. His initial review was the only double-length piece he had written for the Sun-Times, with the first half apologizing for the second half. Finally, he rewrote the piece from scratch and got it out of his system, pointing out that Birth was the only film that he could not revisit, contrary to Malcolm’s definition.

Ebert remarked that Birth was “vile” and “evil,” but pointed out that it was still a great movie and set the film language of our time. He pointed out that Woodrow Wilson had praised the movie, despite being the President of the United States, a Democrat, a liberal, and a member of the Ku Klux Klan. Clearly, Ebert suggested, despite the climate of the past five years, America had made greater progress in the past century.

Ebert described what it was like trying to write backstage at the Oscars. The level of security is extraordinary. (And Ebert pointed out that the backstage area was perhaps the worst target for terrorists to attack, since it was far from the main action.) To obtain even the headphones to plug into the broadcast, he had to show his driver’s license. Picture a reporter with a laptop, spending the entire night filing one paragraph after another to the editors in Chicago (who are rearranging the piece in backwards order of importance, with the least important paragraphs being composed before the major ones). In one ear, the reporter has the earphone. In another ear, foreign journalists are screaming into telephones, causing a polyglot racket. And then there are the winners, who are shuttled out in front of them.

Among these journalists, Ebert described another contingent. A bunch of folks who none of the veterans could name, but who didn’t take notes and who didn’t have laptops. These were the folks who got to ask the questions. Which explained all the dumb ones.

Ebert mentioned that Cate Blanchett’s reply to one of these dumb questions was the funniest thing he had heard since covering the Oscars in 1968. Blanchett, who Ebert suggested was one of the most elegant actresses around (and who couldn’t refrain from mentioning about how nice the dresses were this year), had been asked by one of these boneheads if her Oscar would have any impact on her career. She replied, “Absolutely, asshole.”

Ebert mentioned that he wished Martin Scorsese had won for Best Director. He revealed that he preferred Keaton to Chaplin, because Chaplin wanted to be liked and Keaton didn’t care. He also revealed the ridiculous waivers that journalists had to sign to get interviews. For example, if you want to talk with Tom Cruise, you can’t mention politics, the girl he’s dating, and you can’t write anything bad about them. Plus (here’s the kicker), if you violate the terms of the agreement, you open yourself up to being sued by Cruise’s people. The answer, Ebert remarked, was simple: No Tom Cruise interview.

Ebert had a great Lee Marvin story from the old days. He profiled Marvin for Esquire and headed to his home in Malibu. He was told not to arrive before noon. Marvin opened the door, still in a bathrobe, with four days’ growth of stubble on his face, holding a Heineken. He proceeded to spend the next three hours trashing everyone he had ever worked with and every film he had ever appeared in. “Josh Logan? Not a very good director. He makes a movie with singing boys and has me and Clint Eastwood sing.”

Marvin’s girlfriend returns. Marvin demands more beer. The green stuff. She refuses. He orders it himself over the phone.

Then his dog shows up with something in its mouth. Marvin notices that it’s a pair of panties. His girlfriend remarks that they’re not hers. Marvin replies, “Bad dog.”