It was the end of another sunny day in the Haight — the perfect weather to get acclimatized for a journey into the dark and depressing world of William T. Vollmann. He was reading at the Booksmith. I met up early with Tito and Scott for a little bit of collective preparation. 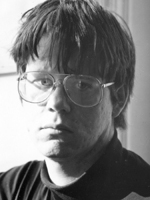 Scott and I weren’t too sure that our sake martinis would cut the mustard with a man of Vollmann’s temperament. Were our beverages masculine and intellectual enough? More importantly, were they violent enough? Why not Molotovs?

It was Tito who was the smart one, settling upon a beer. Not that Vollmann was kicking it there with us, but we had taken a good long look at the publicity photo in our collectively memory and formed a few theories about the guy.

Was Vollmann the 21st century answer to Hemingway? Would he speak calmly? Would he do anything insane? Would he fire his starting pistol or start howling like a mad wolf at the moon?

As it turned out, he didn’t do any of these things.

By the time we got to the Booksmith, it was nearly SRO. There was a crowd of about 40 sitting in the chairs: a lot of twentysomethings with a few punks and bespectacled intellectual types — one bald and with a ponytail. A few minutes into the reading, folks were standing near the stacks. At the stroke of seven, there was a sudden hush that lasted about thirty seconds before the din of conversation resumed. One thing about Vollmann’s fan base: they were punctilious in their temperament. Vollmann, it should be noted, is a staple at the Booksmith. In fact, he’s on record as the author with the most appearances.

In my mad rush to get there on time, I had forgotten to bring paper. To my considerable astonishment, Scott offered to rip a few pages from his Moleskine notebook. “Are you sure?” I asked. Scott ensured me that he was sitting on a huge stack of them. My ethical qualms aside, the rip served as an appropriately menacing prelude to the man himself.

Vollmann was dressed in a slighly off-white shirt, a vest with rectilinear elements of red and black, and grey trousers. His spiky bangs looked as if they had been self-cut. And while this may be stating the obvious, Vollmann wasn’t much of a smiler.

Vollmann did this swishy head swirl just after being introduced. I wondered if it was the recent stroke or just a warmup exercise that Vollmann might have picked up while researching his lengthy work on violence — perhaps some Visigoth calisthenic exercise to be performed just before a continental invasion. He then announced that Europe Central, the book he was there to promote, was “a real downer.”

This book emerged out of wanting to understand the enemy. It’s composed of 37 tales, many of them involving dichotomies, predominantly comparing the Soviet Union with Germany.

Vollmann read two stories. The first one, “Zoya,” dealt with the infamous Soviet propaganda figure and was inspired by the film loops of concentration camp that Vollmann observed as a boy. The second one contrasted the life of a Nazi with the common idea of assigning blame to others during the Nuremberg trial. Vollmann read these stories very precisely, adopting a monotone timbre that resembled the voice of Stan Lee to some extent.

Vollmann answered some questions about politics. He said that we weren’t Nazis yet, but pointed out how Stalingrad had been demoralizing for the Germans and that the sense of safety under Nazi Germany was very similar to the one currently in place within today’s government. He suggested that Arab Americans would be locked away without a second thought if there were more terrorist attacks on U.S. soil.

A young writer asked Vollmann how often he writes. He says that he writes every day, ideally from his first cup of coffee until when he goes to bed. When he gets stuck on something, he generally works on something else. He asked the writer in return how often she wrote. She said three hours a week. He said, “That’s good.”

Vollmann’s currently working on a nonfiction project interviewing poor people. He’s specfiically interested in how other people respond to why they’re poor. Asked about the type of books he’s read for research, Vollmann noted that he had read a lot of books on Hitler and Stalin. He also felt that there should be a major history on the Iran-Iraq War and that, in many ways, it was as significant as World War II.

I asked him a question about how others edit his voluminous work and whether Rising Up and Rising Down had any effect on him getting published. He said that when he was nominated for the National Book Critics Circle Award, he was the flavor of the minute. Now, he’s the flavor of last century. He expressed great gratitude to McSweeney’s for publishing him. Interestingly enough, Ecco, who was one of the many publishers who rejected his full-length work, offered him quite a bit of money for the abridged version.

Vollmann clearly wanted to split, presumably to get home and start writing again. After about 45 minutes, with his constant query “Are there any more questions?” he set himself up at the signing table and was watching the clock to skedaddle out of there.

Did Vollmann live up to our expectations? The consensus seemed no. His answers were terse and he didn’t really like to elaborate on anything. But with such a remarkable array of work to read through, the books stand well on their own.

[UPDATE: Rashomon’s in action. Scott insists that Vollmann wore jeans. But my photograph of Vollmann came out blurry. Perhaps Tito will be the one with the answer. Tito, thankfully, captured the musical angle.]

[RELATED: For additional perspective, don’t miss the Rake’s evening with Vollmann back in December or Ron Hogan’s interview with Vollman from 2000.]