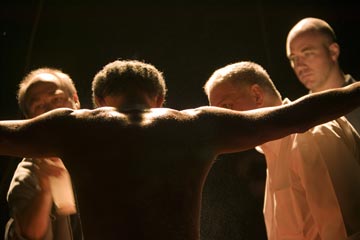 It seems particularly fitting to remark upon Errol Morris’s latest film, Standard Operating Procedure, as Armond White offers yet another hysterical fulmination about how online culture is apparently destroying exegesis, ranting in particular about “the shame of middle-class and middlebrow conformity that critics follow each other when praising movies that disrespect religion, rail about the current administration or feed into a sense of nihilism that only people privileged with condos and professional can tenure.”

This colorful sentiment is, to say the least, a disingenuous generalization. For Morris’s documentary (and the accompanying book written by Philip Gourevitch) would seem to suggest that one cannot approach an important subject like Abu Ghraib without a sense of outrage. That no matter how rational one is in investigating the events behind this nightmarish aperçu into America’s dark underbelly, journalist, filmmaker, and audience member alike must shout to the high ethical heavens. But is it really an act of conformity — class-driven, no less — to be appalled by what is revealed in the photographs? Is it conformist to speculate upon why Sabrina Harman offered a thumbs-up signal or whether or not Lynndie England was coerced by Charles Graner into holding a dog leash?

An innate sense of inquiry cannot be called conformist if it involves an independent series of perceptions that involve grasping some aspect of the truth, subject to change upon additional thought and information. And yet the main problem with Morris’s fascinating new film is that, with the ancillary and rather fixed reenactments photographed by Robert Richardson, it is possible that Morris may be holding the viewer’s hand too much, urging her to care when the interviews alone offer enough unknowns and the horrific glimpses into a soldier’s dead eyes four years later are enough to make one uncomfortable.

In watching these soldiers, I couldn’t help but consider the scene in Claude Lanzmann’s Shoah in which barber Abraham Bomba works in his shop, reproducing the precise grooming moves he employed while cutting the hair of victims about to be gassed in Treblinka. It is an eerie echo from the past that cannot altogether be shaken off in the present. And in my painful determination to understand, however limited, why these soldiers had done what they did and how the Abu Ghraib experience had shaken them, I wanted to know more about how the idea of getting used to anything — even the rough interrogation and humiliation of prisoners — was carried back to the homeland. This may not be an entirely fair request of Morris. His film is, as he contends in the press notes, an investigation into the Abu Ghraib photographs. But if, as Susan Sontag observed, “the photographs are us,” is it entirely unreasonable to ask the investigator to venture further?

It isn’t mentioned in the film, but Javal Davis, who comes across as a smooth, free-wheeling raconteur, is revealed, in Gourevitch’s book, to be “in sales. The career path that I have now, you know — comfortable. I deal with people on the regular basis. I’m not handling anybody’s problems. I’m not dealing with anything violent. So I’m business to business, all personal, ‘How you doing? I’m Javal Davis. Nice to meet you.’ Everybody’s happy. I like that. Sales. I’m a salesman.” And because Morris has flown out Davis, along with all the other soldiers, to his Cambridge headquarters to conduct these interviews, we do not see these soldiers in their current habitat. For all we know, Davis could have viewed his trip to Cambridge as a business trip. Business to business. And he could have adjusted accordingly.

It’s possible that Richardson’s visuals serve as a device similar to Comte de Lautréamont’s unusual narrator. In Maldoror, Lautréamont offered a unique device in which the narrator often parodies feelings by willfully distorting or rethinking the sordid events that are presented. Likewise, by illustrating what his interviews are telling us through these visual reenactments, this may be Morris’s heavy-handed help to us that we must rethink our own thoughts and feelings concerning these photographs. Or perhaps it’s more visceral. As I learned in an interview I conducted with Morris this week, outrage was also involved in these reenactments.

The outrage is conveyed as a prisoner is described having his eyebrows shaved off, with Morris including a close-up of a razor deracinating a tuft of hair. Morris likewise dramatizes a dog that terrorizes another prisoner. But Morris has the dog menacing the prisoner in slow-motion, with a melodramatic sound mix depicting the dog’s bottom jaw snapping shut like a steel trap.

Given the intriguing ambiguities unearthed during the interviews, this seemed to me to spoon-feed the audience too much. And I wasn’t alone. In an essay for Artforum, Paul Arthur took umbrage with these visuals, observing:

Their style, however, belongs to a film genre that provides titillation through horror. To employ this rhetoric in a documentary about actual horror is obscene, yielding familiar aesthetic thrills as a substitute for specificity of meaning. We aren’t prompted to contemplate the Iraq occupation’s signature scandal as the product of a mercenary chain of executive decisions, cultural attitudes, venalities, and personal pathologies; we are, as it were, let off the hook. It’s only a movie.

If a generic sense of horror is what is required to get through to the average moviegoer, then I cannot quibble as strenuously as Arthur does (and perhaps White will). But if a complex issue requires complex consideration, then any reenactment that will help a viewer construct a “map of reality” must not dictate too much. It is reasonable to accept the shaved eyebrow, but the dog goes over the top.

Likewise, in the book, Gourevitch maintains a level-headed, mostly objective tone for almost 160 pages before writing:

There is a constant temptation, when rendering an account of history, to distort reality by making too much sense of it. This temptation is greatest when the history is fresh and deals with crises that are ongoing — crises that mold our understanding of our world and ourselves. Surely, if you have come this far in this sordid tale, you must crave some relief, some release, from the relentless, claustrophobic annihilation of the dungeon: a clear and cleansing note of sanity, an interlude of avenging justice or an eruption of decency, the entry of a hero. But surely you don’t want to be deceived. There is no such solace or sanctuary in this story.

Gourevitch then launches into a grand attack on what the Abu Ghraib atrocities say about America, pointing to the famous precedent of treating enemy prisoners well set by George Washington and fulminating against the Bush Administration. Not even a journalist as dutiful as Gourevitch can look at the photos and the complicit involvement of these bad apples without exploding.

Others will likely perceive this film to be mostly about the visuals atop the visuals, the analysis atop the analysis, the meta within the meta. But the real “standard operating procedure” explored in this film isn’t so much the pedestrian issue of how war caused the lines of basic human decency to become fuzzy, but the manner in which a great filmmaker has partially abandoned his subtleties to get Americans hopping mad. The faults lie not in the filmmakers and not, as White suggests, the critics. They’re doing their best to continue the dialogue, but their efforts have increasingly fallen upon deaf ears. For Abu Ghraib does not entertain. And neither does moral outrage.

(To listen to my podcast interview with Errol Morris, go here.)