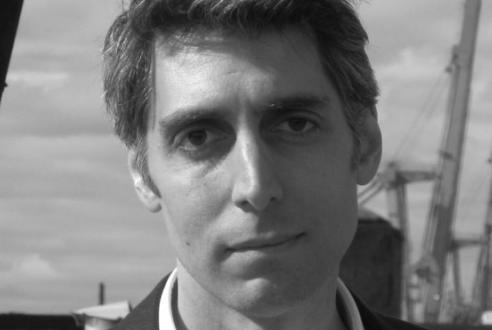 Can a novelist be prescient about his own health? Does a novelist need to learn how to breathe to finish a book? In this 45 minute radio interview, Luminarium author Alex Shakar discusses these questions and more.

Alex Shakar appeared on The Bat Segundo Show #410. He is most recently the author of Lumanarium.

Condition of Mr. Segundo: In search of a zendo to teach him a few cheap tricks.

Subjects Discussed: Splitting novelists into scientists and mystics, how location and characters transmute over multiple drafts, novelists who are prescient about their health, spirituality, writing about the unknowable, learning how to sit and breathe properly from a zendo, the visual look of sentences and paragraphs, how experience translates into words, the icons at the head of each section in this book, design elements, 9/11 fiction, catastrophic post-ironic fiction, culture that makes meaning of historical events, the time needed to process a fictive response to a specific time, not naming specific New York landmarks, walking, Zeckendorf Towers vs. Zeckendorf’s theorem, Brounian vs. Brownian motion, finding significance in character names, Vartan and avatars, crafting a novel with meaning and mystery in equal proportions, “The Year of Wonders,” the question of whether fiction can still be dangerous when corporations co-opt irony and social satire, David Foster Wallace’s “E Unibus Pluram,” the gray areas within irony and sincerity, Richard Powers’s Plowing the Dark, conscious and subconscious literary influences, Middlemarch, Dostoevsky, humiliation in literature, devising a close third-person that is close to an unreliable first-person narrator, authenticity in narrative, the benefits of being horrified by surreal dreams, out-of-body experiences, the unusual sexual qualities of twin brothers, hostile T-shirts, President Bush and chimpanzees, adult characters who live with their parents, the boomerang generation, personal economic characteristics before the recession, thirtysomethings and Bildungsromans, 21st century fiction being identified as work trying to find the fresh and the human within the cold and the inhuman, novelists who don’t want to deal with cell phones, utopias and dystopias erected by novelists as a method of evading reality, faith in technology as a method of coping with the real, faith and atopia, and an approach to spirituality that is without belief.

Correspondent: I wanted to start off by discussing a recent essay you wrote for The Wall Street Journal in which you divided novelists into scientists and mystics. You suggested that the scientist is someone who prethinks the story and the mystic is someone who kind of goes along for the ride, flies by the seat of her pants — that the best novelist is somewhere in between. And I’m curious, since Luminarium took ten years for you to write and since you were dealing with multiple drafts, hundreds of pages — my question is how you could shift gears. Because I know, for example, the twin brother George was a later addition. So it’s almost like you’re going from Earth being the center of the universe to the sun being the center of the universe. How does this work for you?

Shakar: It just seems to be my process. Even for The Savage Girl, my last novel, it started off as a novel that took place in Austin, Texas, and it was about slackers hanging out and smoking cigarettes and then, over the drafts, everything changed. Including the protagonist. She wasn’t even in the first draft and then she came into subsequent drafts. The city changed to a fictional city built on a volcano. So there’s usually some core that stays the same and then everything changes around it. And in the case of Luminarium, George is, in a way, what I consider now to be pretty much the center of the book. He’s not the protagonist, but he’s what the whole story revolves around. I spent a long time. Draft after draft. And the book kept sucking. And I couldn’t really figure out why. It just felt like the the pieces just weren’t coming together. And I couldn’t get beneath the surface of the subject. And I had this idea for George earlier on. Or, at least, for a twin brother. It was in the back of my mind. And I kept saying, “Oh no. That’ll just complicate it even more. It’s such a complicated story. Why add another component to it?” But I was amazed, once I started going in that direction, how it actually allowed everything else to really snap together around it. It was like a new backbone and a new heart for the book. And so it was nice for me to see how it was evolving in that direction.

Correspondent: I’m wondering. I’m presuming [the other brother] Sam was there in the earlier drafts.

Correspondent: And I’m wondering if he was possibly an overstuffed character, that the “big ideas” that George brought to this company were there within Sam in an earlier draft. Or did you have such items as the tweezers, which seemed to reflect the twin theme that was going on, and the Narcissus idea — did it just need to be more explicit? Is this one of the reasons why George came to fruition?

Shakar: Yeah. I think so. I think it helped me just manifest and physicalize and emotionalize a lot of the stuff that was going on in the story. It felt for a long time that I was looking for something. I kept trying to figure out — I mean, the main problem was what sends Fred on this journey. And it’s a hell of a journey that he goes on. So it really took something to set him off on it without just making him seem like a navel gazing type. I mean, that was the way he seemed in the earlier drafts to me. And so I experimented with giving Fred different illnesses. I gave him a heart condition. And then after a couple months, I started getting chest pains. I had to check myself into the hospital. So luckily that plot element didn’t pan out anyway. (laughs)

Correspondent: You were prescient about your own health. My goodness!

Shakar: Yeah, I don’t know. The chicken or the egg.

Correspondent: Yeah. Well, how do you determine what the right medical condition is? That’s an interesting question. I mean, clearly you don’t want to feel it. But perhaps it manifested in this unknown way. But how do you zero in on what seems to be right in this case?

Shakar: Yeah. Well, for Fred, it took externalizing it. It took giving him the brother. It was odd. Because the book is so much about selfhood and it’s so much about interiority that, at first, it seemed counterintuitive for me to give him the brother. But that actually helped manifest and externalize some of the stuff that was going on. So instead of talking to himself in his head all the time, he’s talking to George. And I think that really brings him down to earth in a way.

Correspondent: There are other Georges that are scattered throughout the book. I’m wondering if George the name was there before George the body, the comatose body in the hospital, was there.

Shakar: No. I don’t think so. I mean, I’m trying to remember if George Bush was…(laughs). Yeah, I think he was actually. That’s true. You’re right about that.

Correspondent: You told The New York Observer that you knew you wanted to write about spirituality, but that it took you a while to figure out that you didn’t understand it. Are the best fiction subjects those that are unknowable? At what point do you know in the writing that you really don’t know enough?

Shakar: Yeah. I wish I had figured that out sooner. But it took me about three or four years of work on the novel before I decided that I needed some hands-on experience. I had done a lot of reading before that point. And I was drawn to writing about mystics and contemplatives. And I saw that it was just something that wasn’t only for these people. It was something that seemed accessible for a human being. And so it was something that I wanted to go and try out. So I went to my neighborhood zendo. And I don’t know what I was expecting exactly. But I had a bunch of big questions on my mind. And the guy sat me down and, for an hour, just taught me how to breathe and how to sit. And these were things that I thought I knew how to do. So it was strange at first. But I stuck with it. I sat. I breathed. I counted to ten. So for the last five years, I’ve been doing it pretty regularly. Meditating. Going on retreats. I’ve found a lot of terrific things in it. And I think it helped me get a handle on the kinds of experiences that Fred was having. Or at least some of them. And it helped me feel like the material was my own a little bit more. And there’s a lot of elements of Zen which ended up coming into play in the book.