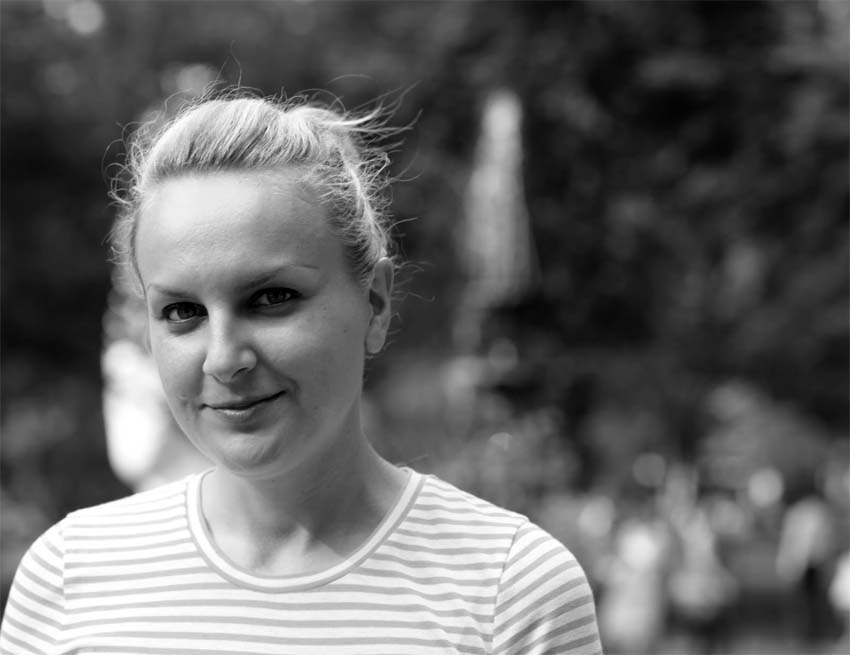 In this 50 minute radio interview, novelist Karolina Waclawiak discusses How to Get Into the Twin Palms, the collapse of bingo parlor culture in Brooklyn, the virtues of not talking with people, and Polish identity.

Karolina Waclawiak appeared on The Bat Segundo Show #470. She is most recently the author of How to Get Into the Twin Palms.

Condition of Mr. Segundo: Combing through the immigrant experience and what’s left of his deliquescing hair.

Subjects Discussed: Kafka’s The Trial, being forced by parents to read Kafka and Dostoevsky, Roald Dahl, avoiding biographical details about a monstrous author, Norman Mailer, Madeleine L’Engle, Polish immigrants who revered Reagan in the 1980s, immigrating from Poland, the virtues of staying indoors, being a loner, kicking around Los Angeles, finding secret uncool places in Highland Park, bars that open at 7AM, discovering Bukowski and John Fante at eighteen, flophouses, the real-life Hollywood Downtowner Inn, peeping into windows and making up stories about strangers, the Hollywood Star Lanes (the former bowling alley where The Big Lebowski was filmed), stealing planted trees, finding reasons for Anya to leave the house by introducing eccentric objects in the narrative, the real Twin Palms, avoiding interaction, not talking back to people, when made up stories are more interested than the reality of the situation, the interview with Roxane Gay, talking with other immigrants, being ostracized because of ethnic identity, universal insights about being a young woman which transcend ethnicity, not being visual about who you are, being motherly about young women, gender power play between men and women, male power, Sara Finnerty’s HTML Giant review, youthful diffidence and Anya not wanting to hear her accent, comparing a Polish identity with America and Russia, family shame, being a liar to figure out who you are as a person, family ghosts, the very small Polish community in Los Angeles, similarities between Polish and Jewish identity, memoir culture and “suffering enough,” whether or not Williamsburg hipsters can stand in line, Communist food tickets, being detained at the border, input from Gary Shteyngart, animosity between Poles and Russians, sharing common suffering, the Four Yorkshiremen sketch, research into Polish solidarity (and often the lack thereof) within Los Angeles, speaking Polish, calling out bingo numbers, the collapse of bingo parlors in Brooklyn, bingo as a social outlet for older women, Robert Putnam’s Bowling Alone, not having an agent for How to Get Into the Twin Palms, the difficulties of getting an agent, myths behind likable characters, query letters, the futility of agent mixers, working at The Believer, efforts to be a screenwriter in Los Angeles, agents who want manuscripts that they can sell quickly, commercial forces working against quirky voices and dangerous perspectives, Shteyngart as a pansexual blurber, the many voices within Waclawiak’s fiction, and wreaking havoc on shoreline communities.

Correspondent: The immediate influence I saw when reading this book was, of course, “Before the Law” — that whole chapter in The Trial, where you have this priest who is sitting there trying to get in and actually study the law in Kafka’s The Trial. And I wanted to ask if this might have been an inspiration for Anya, who is also trying to get in, more than living up to your title, into the Twin Palms. What’s interesting is is that we’re not even certain why Anya wants to get into the Twin Palms. I’m curious if Kafka might have been an influence and what her version of the law might be.

Waclawiak: It’s interesting you mention Kafka. Because Kafka is pretty much one of my father’s favorite writers of all time. And he was always talking about Kafka and Dostoevsky at home. So perhaps subliminally, I was influenced by Kafka. He did make my brother read every Kafka book ever written, starting at age eight.

Correspondent: But not you?

Correspondent: Why? Why did the boys have to read in the house?

Waclawiak: Well, I was, I would say, a bad kid who just didn’t want to do anything my parents said. And if they liked something, I instantly hated it.

Correspondent: Did they do the same thing with Dostoevsky too? “You’re not leaving until you’ve read The Brothers Karamazov!”

Waclawiak: Yeah. And when he was eighteen, he gave me a Diderot book and he said, “This will explain men to you.”

Correspondent: What? Wow! Well, you had quite an interesting upbringing.

Waclawiak: (laughs) I did.

Correspondent: How on earth did you get a love of books based out of this? (laughs)

Waclawiak: Our house is pretty much all books. And my sister was a huge reader. All of us were huge readers. And my parents are both electrical engineers. But my father was a big dreamer and just loved to read. We didn’t have a ton of toys. But we had a lot of books. So I grew up reading. And strangely I would read the same book over and over and over again. So I pretty much had, as a kid, every Roald Dahl book memorized. Chocolate Factory was my favorite. Because I was just obsessed with a world where food was everywhere. It just seemed amazing to me.

Correspondent: But when did you find out that Roald Dahl was a monster?

Waclawiak: (laughs) I never wanted to believe it!

Correspondent: Oh, I see. You put your head down. “No! He’s such a great author! I don’t want to know about his life.”

Correspondent: Stabbing his wife. Doing all sorts of stuff.

Correspondent: What other books did you have growing up in the house that you reread over and over again? I’m curious.

Waclawiak: I was really influenced by Madeleine L’Engle and really into fantasy for some reason. Although nothing that I write is fantastical at all. So it was more about just escaping and other worlds and just finding ways to be anywhere except where I was.

Correspondent: Was it a fairly austere family upbringing which caused this need to escape or…?

Waclawiak: So we emigrated to America in 1981. And we didn’t have anything. I mean, a church sponsored us in Texas. And I mean, they bought our groceries for us. We didn’t have any pots or pans or anything. Everything from the ground up was from this Catholic church.

Correspondent: Did your family revere Reagan much as Anya’s family did?

Correspondent: They did. I figured that might have been from life experience. (laughs)

Waclawiak: Yes. Yes. I mean, it was flags on every…bags of clothing, basically. And Reagan was the reason we came to America. So Reagan was like…

Correspondent: When were you first skeptical about Reagan? Out of curiosity.

Waclawiak: I don’t know. When I started realizing what was going on….

Correspondent: Anyway, sorry to interrupt. A more interesting story. So you came over to America.

Waclawiak: Came over to America in 1981. And we just didn’t know anyone. In fact, we were supposed to go to Australia. We left Poland, sort of middle of the night. Lined in our suitcases were our birth certificates and stuff like that. That whole way out. We went to Austria.

Correspondent: Do you hide now in the present day things in your suitcases? Old habits die hard, I hear.

Waclawiak: No, no, no. We’re out in the open. We’re now naturalized. It’s okay.

Waclawiak: I pay my taxes. So we were in Austria and we were supposed to go to Australia. But my father didn’t put enough postage on the letter to the man who was supposed to sponsor us. So it didn’t go airmail. And we were waiting and waiting and decided he must just not want to sponsor us in Australia anymore. And my mother heard that Reagan had opened the border for more families. So she essentially took us to the front of the line. My sister was seven. And I was two. And she had both of us. And she’s like, “Let us into America.” So we ended up in Texas.

Correspondent: It’s interesting. So to merge this family upbringing with your love of reading fantastical YA stuff to get to this particular novel, which is very much rooted, of course, in identity but is also interesting because Anya spends a lot of time inside. And I’m wondering how you came to Anya based off of your reading and based off your personal background. What was it that caused her to become this character that you needed to pursue in the course of a novel?

Waclawiak: Well, I think it’s interesting. Because for myself, I spend a lot of time indoors writing. And I think I decided at age 12 that I was going to be a writer. So I became very serious about wanting to be a writer.

Correspondent: And that meant staying indoors.

Waclawiak: I had many journals.

Correspondent: Only allowed out during the hours of 4 PM and 5 PM for a brief constitutional.

Waclwiak: Yes. Perhaps. To play by myself in some kind of swamp near our house.

Waclawiak: Well, I was just really shy. Like I couldn’t talk to people. I had a few friends, but I just was so shy. And I certainly couldn’t talk to boys. And I didn’t know how to do it. I had a couple friends. But we had moved a bunch when I was a kid. So I never had those born-in-the-same-house lasting friendships. Kind of “been in this neighborhood my whole life.” So I was actually a loner. And I used to tag along after my sister, who wanted nothing to do with me. I mean nothing. So I was lost.

Correspondent: So how did you learn to talk with people?

Waclawiak: I think I was in my twenties, actually. I remember that I took classes in my high school and Columbia.

Correspondent: “How to Talk to People.” Yeah.

Correspondent: Do you still do that to this day sometimes?

Waclawiak: Yeah. I mean, I think I prefer to be alone.