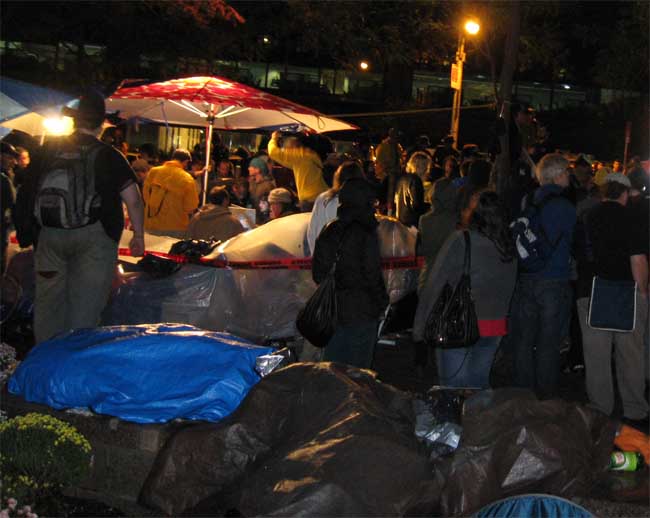 I spoke with several protesters at Zuccotti Park on Saturday night. Here’s my overview of the atmosphere that evening, as well as an eyewitness account (with audio) of what happened on the Brooklyn Bridge.

On Saturday night, I returned to Zuccotti Park. It was 55 degrees. Winds lashed at tarp and tents, flapping up flaps and whipping at sleeping bags. But the protesters remained calm and good-natured. Some spun hula hoops around their bodies as the calls and responses carried on.

“The rain is really the only obstacle,” said a protester who had been at Occupy Wall Street from the beginning. “Tonight’s the only night that it’s been actually cold.”

He informed me that there were plenty of Mylar blankets and sleeping bags at the comfort station — the results of ample donations.

A man who had once worked on Wall Street and who lived five blocks away was leading the crowd:

“I think you people aren’t crazy.”

“I THINK YOU PEOPLE AREN’T CRAZY.”

“I love the way you communicate.”

“I LOVE THE WAY YOU COMMUNICATE.”

“The world has noticed your voice.”

“THE WORLD HAS NOTICED YOUR VOICE.” 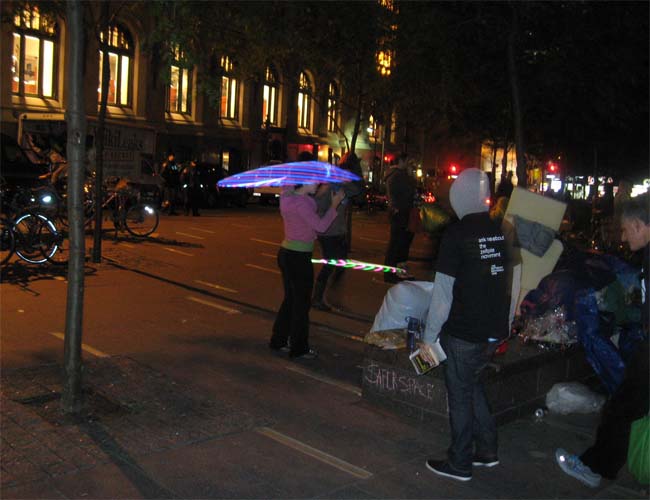 A rumor had circulated that Marines were coming all the way from Florida on behalf of the protesters, to protect them from the NYPD. “I didn’t fight for Wall Street,” posted serviceman Ward Reilly on his Facebook wall. “I fought for America.” Reilly had pledged that a Marine formation would be held that night. But the Marines hadn’t yet turned up in Zucotti Park. They must have been tied up in traffic.

I talked with a young man, who identified himself to me as “Big Ben” and who was busy blowing bubbles.

“I just picked this thing up a second ago,” said Ben. “I saw it on the ground. I figured that I could just dip it like I am and the wind would take care of everything else.”

I had arrived shortly before 10:00 PM: only a few hours after 700 people had been arrested at the Brooklyn Bridge. On Saturday afternoon, protesters had decided to walk across the Brooklyn Bridge. Police blocked the bike path, leading them down the main road, where orange nets and arrests awaited. Natasha Lennard, a freelance reporter for The New York Times, was one of those arrested. An NYPD spokesman had informed me earlier in the evening that most of these protesters would be charged with disorderly conduct at minimum and that some would be singled out for additional offenses. 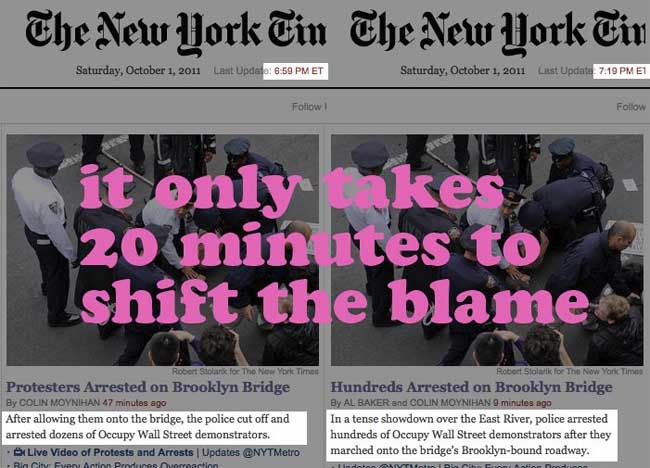 I was uncertain who was at fault. As it turned out, The New York Times didn’t know either. Within twenty minutes, the New York Times had shifted the blame on its website (adding Al Baker to the byline) from the police to the protesters.

[10/2/11 PM UPDATE: The Voice‘s Nick Greene talked with the New York Times City Room about the changes, which include disappearing paragraphs and the videos that the Times relied on for its version of the events. As Bucky Turco has tweeted, there’s a mysterious edit in the second video.]

I talked with Jesse, a friendly and excitable young man with a $100,000 education in industrial design and no job prospects. He had arrived at Zuccotti Park that very day from Philly. He had been at the Brooklyn Bridge and spoke of “awesome photos.” His story cast some aspersions on the revised New York Times angle.

“I’ll tell you exactly what happened!” said Jesse. “They pushed people. They blocked. I think the goal was to go on the bike path. And every one of the cops were in front of the bike path. So everybody walked down on the road. ‘Hey guys! This way!’ That’s what they did. And so everybody went down that way.”

But Jesse got the sense that something was up.

“I was standing there for a couple of minutes,” continued Jesse. “But after like ten minutes of me going like, ‘Guys, if you don’t go, I’m going to go without you.’ I just fucking left. I was not getting arrested. I was too close! I was walking forward. I leave them. And I see all these hands go blazing down underneath the bridge. And they come up behind the protesters.”

“So as I’m going the other direction, there’s fucking four New York buses backing out and backing all the way onto the bridge with the cops. And they’re getting ready to fucking arrest everybody.”

I asked Jesse if he knew why people started walking on the road when the bike lane had been blocked. Whose idea was it?

“It wasn’t an idea,” he said. “It was ‘Well, the cops wanted us to go this way. So we’ll go this way.’ Do you know what I mean? It was like nonpassive. You have people, police there. And you have no police there. So nonpassive. You don’t go through the cops. You go around the cops. You know what I mean? We’re not trying to hurt anybody. We just want to yell and scream.”

Jesse also confirmed reports that police had singled out men for arrests more than women, telling me of a woman with a dog who was able to get around the tape at the other end by dint of possessing a pet.

You can listen to my interview with Jesse here: