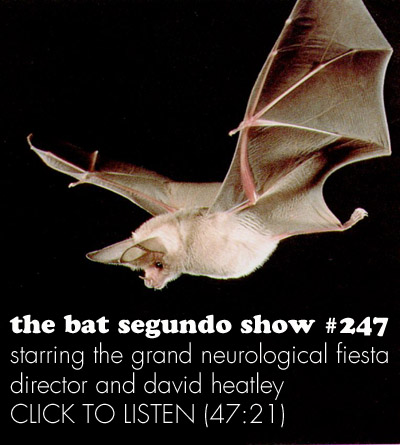 David Heatley appeared on The Bat Segundo Show #247. Heatley is most recently the author of My Brain is Hanging Upside Down.

Condition of Mr. Segundo: On the waiting list for a brain transplant.

Subjects Discussed: Surreal dream comics, the Ramones, memory and associations, Francois Truffaut looking at an old school photo and remembering all the names of his fellow students over an entire day, the deficits of memory, training your brain with a journal, apologetic footnotes to family members, the ten year rule, protecting careers and trying to be considerate with memoir, pink bars covering penises, flinching from the pornographic narrative, “Family History” as a hip-hop montage, why four Ns are good for the UNNNNH, using an all-red palette for extreme emotions, David Rees, the muted color scheme of “Sex History,” the 48 panel setup, Dave Berg’s “The Lighter Side,” shifting from squiggly panel lines to precise lines, the feelings that a ruler conjures, being traumatized into preferring memoir, imagination at the expense of reality, documenting a life without a sense of style, shifting dreams into narrative, being the dutiful client to the therapist, the influence of therapy upon Heatley’s comics, larger intentions, cliche in personal comics, Heatley depicting himself sobbing, Heatley’s ideal reader, Aline Kominsky-Crumb and Julie Doucet as influences, Doucet’s dream comics and castration, digesting a narrative involving dog fucking, retouching through computers, revealing biographical truth, Heatley’s angry father, depicting personal use of racist language, shared common experience with the reader, and being too concerned with being unique. 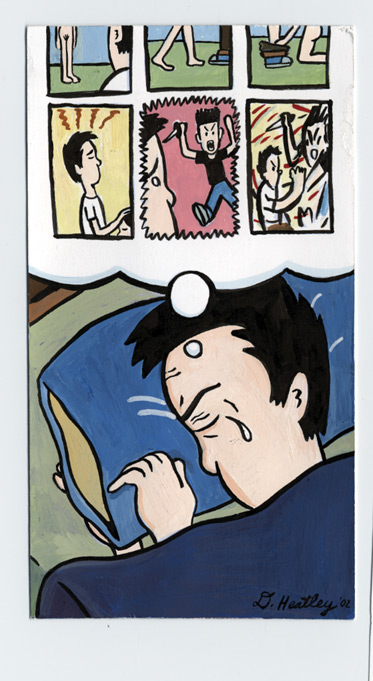 Correspondent: I wanted to also talk with you about your “Family History” strip. I mean, it’s probably the closest thing in this collection to a hip-hop montage. You have, of course, the many births with the common images. A mother — one of your ancestors — giving birth with the “UNNNNH!” And you have a marriage with the “I do.” The swathed baby who is being held up by the white hands. And the like. I wanted to ask why repetitive images, or a hip-hop montage, seemed the best way to approach your own particular past.

Heatley: It’s funny. I never would have — that phrase “hip-hop montage” is strange to me. But it also rings true. So, yeah, thanks for that. You know, the repetitive thing is about — once I had my own baby, it was a realization that every single person that’s been born in my family history was this baby at one point. And every mother of that baby grunted in the hospital, and pushed it out. So it’s sort of honoring all these faceless women who have been lost. And it’s also — I think that strip is about, if you take any one of those babies, you can make a book this long about them. And so I’m just one of the babies in that book. And here’s my entire story. And I do it with my daughter at the end. Instead of doing one panel for her life, I wind up doing four pages, focusing on that day. So you could do that for any of those babies too. You could focus in on what was happening that day when they were born.

Correspondent: How did you settle upon the four Ns for the “UNNNNH?”

Heatley: I did, yeah.

Heatley: (laughs) Yeah, it did. You know, it’s like poetry. It felt right.

Heatley: That’s a great question though. Four Ns. I didn’t even know they were consistent.