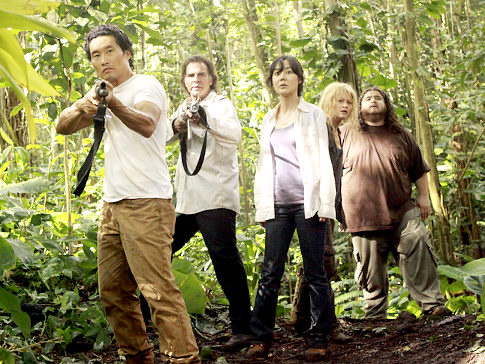 DAMON runs ALL THE WAY THE FUCK INTO THE OFFICE, passing SIX FUCKING WRITERS. He carries a latte — A FUCKING VENTI LATTE, MOTHERFUCKERS! Teach that FUCKING BARISTA a lesson!

Damon spills his latte onto the boardroom table. Holy. Fuck!

CARLTON
Fuck. Where’s Brian when you need him?

The writers cower underneath the table. BENT and BROKEN! This is a REALLY INTERESTING standoff and suddenly —

BRIAN
Christ, do I need to straighten out another fucking
mess from Season 3?

ON CARLTON. Yeah. Oh yeah. Fucking camera tight on FUCKING Carlton! GET AS CLOSE AS YOU CAN ON HIS FACE OR I’LL CANCEL YOUR LUCRATIVE SENFUCKINSATIONAL CONTRACT, YOU DIRECTOR CUNT!

What? The? Fuck? Writer!

CARLTON
(seriously fucking backpedaling)
Have the intern look up Faraday on Wikipedia again.
Maybe there’s some bullshit science we can throw
in. Keep the fucking websites guessing.

But oh no! YOU FUCKING DIDN’T BRIAN!

And then Damon’s got this like BIG FUCKING LOOK OF HATRED — like he’s going to FUCK Brian. Up. The. Ass.

DAMON
Hey, comic boy. You want to pull some Bryan Fuller shit
on me?
BRIAN
No, man. I was only —
DAMON
Because I’ll write a script with more fucks than
a callgirl’s monthly ledger.
CARLTON
Fuck you.
DAMON
No, fuck you!

And the other writers are like totally RUNNING THE FUCK AWAY as Carlton and Damon are TOTALLY FUCKING BEATING THE SHIT OUT OF EACH OTHER!

And if Brian has some FUCKING IDEAS on where to go from here, well then YOU KNOW HIS FUCKING PHONE NUMBER!